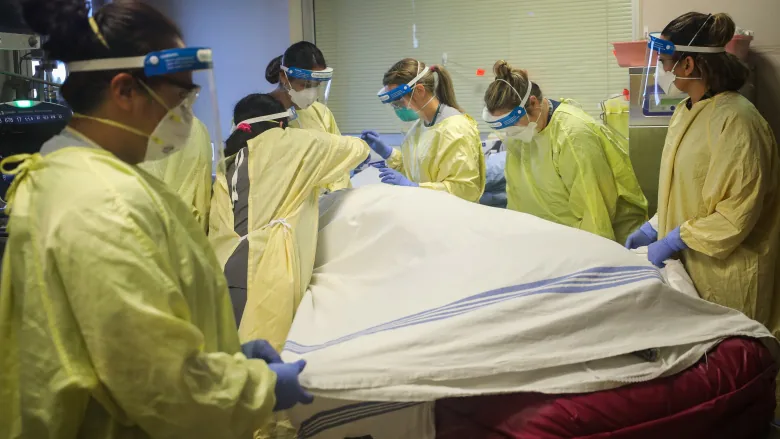 At least 2,095 Albertans died of COVID-19 in 2022, according to data released Friday afternoon.

It’s the first data update in more than two weeks from Alberta Health, which took a break from providing statistical information to the public over the holidays.

The reported number of deaths in 2022 may increase slightly as data continues to roll in. There are often delays between when a person dies and when it is reported to Alberta Health.

The fact that 2022 was roughly as deadly as 2021 may come as a surprise to some Albertans, as the pandemic’s public health measures fade further into memory.

Virtually all restrictions were lifted in the province on March 1 of last year and, for many people, life has returned to a semblance of pre-pandemic normal.

But for many health-care workers, epidemiologists and everyday folks who have continued to follow the COVID-19 situation closely, the number of deaths in Alberta last year likely comes as a less of a surprise.

Numerous other provinces have already reported more COVID-19 deaths in 2022 than any other calendar year. Nationwide, 2022 proved to be the deadliest year of the pandemic to date.

The surge in mortality was due, in large part, to the arrival of the initial Omicron variant, which ushered in Alberta’s fifth major wave of the pandemic and exacted a major toll last winter.

That wave peaked in February 2022, when it was claming about 14 lives per day in the province.

The BA.1 and BA.2 subvariants followed not long after, bringing a sixth wave of viral infection to Alberta.

That wave peaked in May 2022, when it was killing about 10 Albertans per day.

The number of COVID-19 deaths subsided in June and July but, by August, it began to creep back upward.

By late November, the virus was once again claiming seven to eight lives per day, on average.

As 2022 came to a close, the newest Omicron subvariant was just arriving in Alberta.

Known as XBB.1.5 — and nicknamed, by some, as “The Kraken” — it has quickly become the dominant version of the virus in parts of the United States.

Experts who have studied this new subvariant say it has a mash-up of mutations that could give it multiple advantages when it comes to infecting humans and evading our immune systems, although there is no indication at this time it causes more severe disease.

Also see
COVID-19 deaths in Sask. hit record high in 2022 CBC
2022 was the deadliest year of the COVID-19 pandemic in B.C. What’s next? CBC
The pandemic was worse in Quebec in 2022 than in 2021 CBC
Think the pandemic’s over? Guess again: Year-end figures show COVID-19 tied to more deaths in 2022 CBC
Cases of highly contagious ‘Kraken’ Omicron subvariant identified in Alberta CBC
Pediatric Vaccination Rates Have Failed to Recover Medscape