In the interest of improving compliance, studies of gait modifications to reduce moments and forces at the knee in patients with knee osteoarthritis (OA) are increasingly focusing on gait alterations that will not make patients self-conscious.

Nordic pole walkers in Victoria BC.

Several of the gait modifications studied in the literature, including trunk lean and crouch gait, have offloading benefits but require such unnatural movements that patients are unlikely to adopt them.

“People would rather have OA than look awkward in public,” said Pete B. Shull, PhD, a research assistant in the Department of Mechanical Engineering at Stanford, who presented one of the studies at the ASB meeting.

At the ASB meeting, Shull presented the results of a Stanford-Auckland study exploring the effects of a toe-in gait modification on knee adduction moment (KAM) in patients with knee OA. Using real-time haptic feedback techniques, researchers trained 12 patients with medial compartment knee OA to walk with a toe-in gait, meaning that the foot was internally rotated relative to their baseline foot progression angle. The training involved a vibration motor attached to the lower leg that vibrated whenever the patient’s frontal plane tibia angle (a surrogate marker for foot rotation angle) did not reach a threshold value of .75° less than baseline. Patients had one training session per week for four weeks.

Toe-in gait significantly reduced the first peak of the KAM, which previous studies have found to be associated with OA severity and progression, relative to baseline values. This suggests the toe-in gait shifted the knee medially in the direction of the ground reaction force (GRF) during early stance, shortening the lever arm of the GRF. The second KAM peak and the knee flexion moment did not change significantly with training.

The effects on first peak KAM were similar to those previously reported in studies of medial thrust gait; however, medial thrust has been described as unnatural and difficult to perform without increasing the external knee flexion moment, which can negate the benefits of the reduced KAM, Shull said.

In a separate study also presented at the ASB meeting, researchers from Gainesville, Auckland, and Stanford assessed the effect of several gait modifications on in vivo knee contact forces in a single 88-year-old active individual equipped with an instrumented knee implant designed at the Scripps Clinic in La Jolla, CA (see Knee loads during golf: Implications after TKA, January 2010). 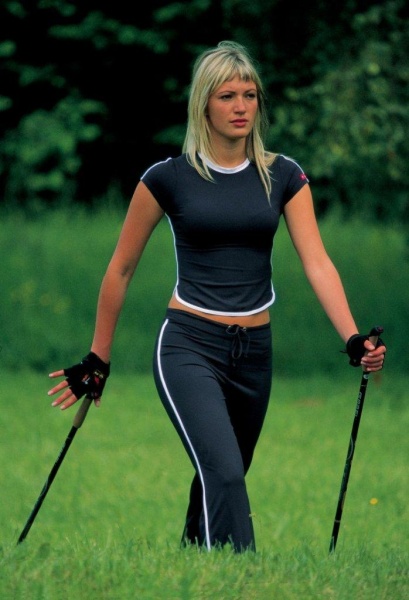 Walking with hiking poles, particularly using long poles and a wide pole placement, significantly reduced medial and lateral contact forces at 50% of stance, at 75% of stance, and across all of stance compared to walking with no modifications. However, pole use did not significantly reduce forces at 25% of stance, when contact forces are typically highest. This may be because the participant tended to contact the ground with the poles between 7% and 11% of stance; earlier pole placement might have led to more significant effects, said Allison L. Hall, PhD, a postdoctoral associate in the Department of Mechanical & Aerospace Engineering at the University of Florida, who presented the findings at the ASB meeting.