Knee osteoarthritis (OA) is one of the most prevalent forms of this disease, with the medial compartment most commonly affected. The direction of external forces and limb orientation during walking results in an adduction moment that acts around the knee, and this parameter is regarded as a surrogate measure of medial knee compression. The knee adduction moment is intimately linked with the development and progression of knee OA and is, therefore, a target for conservative biomechanical intervention strategies, which are the focus of this review. We examine the evidence for walking barefoot and the use of lateral wedge insoles and thin-soled, flexible shoes to reduce the knee adduction moment in patients with OA.

We review strategies that directly affect the gait, such as walking with the foot externally rotated (‘toe-out gait’), using a cane, lateral trunk sway and gait retraining. Valgus knee braces and muscle strengthening are also discussed for their effect upon reducing the knee adduction moment.

The medial tibiofemoral compartment of the knee is most commonly affected by OA and this predilection probably reflects the loading experienced during daily locomotor activities. 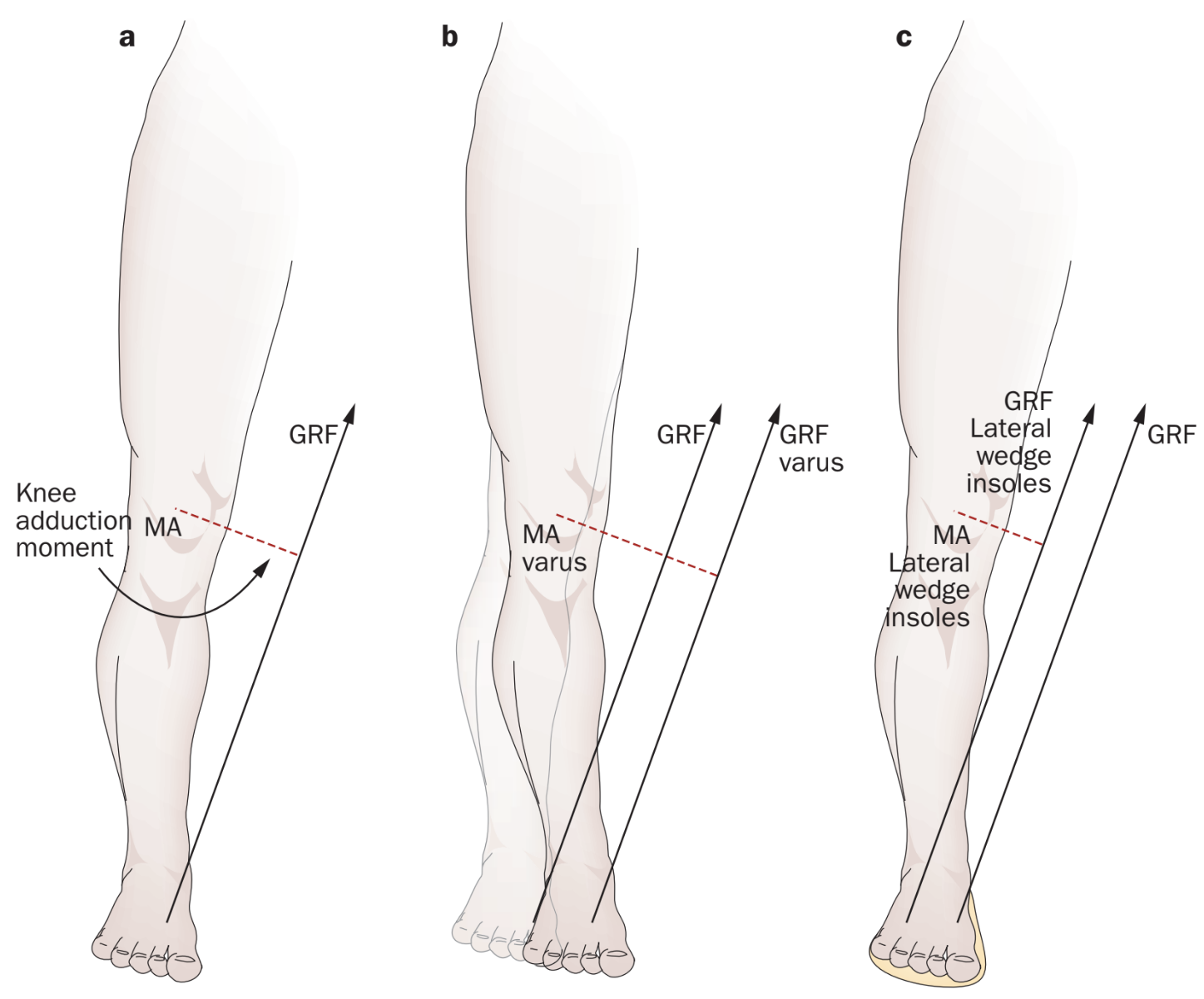 The integral role of biomechanical factors in the development and progression of OA, especially of the lower limb, is becoming widely acknowledged. Throughout the entire stance phase of walking, an external adduction moment acts around the knee joint, which tends to rotate the tibia medially with respect to the femur in the frontal plane (Figure 1a). This external knee adduction moment is primarily caused by a medially acting ground reaction force, which is present during level walking and other loco-motor paradigms, such as stair negotiation (Figure 1a).

The magnitude of the knee adduction moment is influenced by the magnitude of the ground reaction force, the moment arm of the ground reaction force about the knee joint center (defined as the perpendicular distance between the action line of this force and the knee’s center of rotation), and the mass and acceleration of lower limb segments (Figure 1a). A high knee adduction moment reflects increased compressive forces acting on the medial aspect of the knee and is widely regarded as a surrogate measure of medial knee compression.