The healing power of equine therapy.

A pink-haired teenager painted two pictures on the side of her massive, living canvas. First, the girl drew a picture of a broken heart and a horse. Then, she used the paint to sketch a person and a full heart.

Tears welled in her eyes when it came time to share with her peers the artwork she had created on a horse on the final day of a weeks-long therapy program. The girl said she was dealing with difficult issues at home and had arrived at the first session with a broken heart. But building a relationship with the animal had made her feel whole again.

In that moment, horse therapist Carrie Watson knew she had made the right decision. Quitting her teaching job in 2012 and moving to the country to follow her dreams of opening a specialized wellness business wasn’t an easy decision. Leaving a secure profession she’d enjoyed for a decade to introduce Albertans to the little-known field of equine-assisted therapy was a risk, but one Watson strongly believed in. And when she heard from students, including the pink-haired girl who opened up during that final exercise, Watson knew she was doing important work. She and her horses were changing lives.

For as long as Watson can remember, the native Calgarian has been drawn to horses. As a young girl, she belonged to a pony club and volunteered at the Fish Creek trail riding stable.

When she faced personal challenges as an adult, Watson found solace in the gentle giants she boarded on land 40 minutes from her city home. The times she felt physically sick, achy and miserable, she found her symptoms disappeared when she was with her horses. She credits time spent with the animals for her character and confidence.

Horses were Watson’s stress relief and she wanted others to experience their healing powers.

There’s just something about them. They’re soothing to the soul.”

She knew she wasn’t alone.

She had long taken pleasure from watching her cousin Jenny, who has multiple disabilities, benefit from contact with horses, and felt a growing to desire to give other people with special needs the same opportunity. After quitting her teaching job, Watson embarked on a year-long training and certification process with Equine Facilitated Wellness Canada. Armed with dual certification (both as an equine professional and an equine facilitated learning professional) Watson opened Whispering Equine in 2013 on land near De Winton, just south of Calgary.

Watson and her team of 12 animals work with a range of clients with such varied afflictions as depression, anxiety, eating disorders, post-traumatic stress, ADHD and developmental disabilities, and those who’ve suffered sexual, physical or emotional abuse.

She teaches private sessions for both adults and teens, in addition to running group programs for junior and senior high school students. Her teenage clients tend to be referred by therapists, school boards, health professionals or parents. Watson considers her horses her co-workers and practices Reiki — a healing technique that uses touch to activate natural healing processes and restore physical and emotional well-being — so her animals don’t burn out.

“When our horses work with people that are struggling inside, whether it’s a physical disability or a mental illness, the horses, to stay calm and present with them, can take on their negative energies,” she said. The healing technique helps the horses release that negative energy.

Her facility includes sprawling outdoor fields and a brand-new large barn, made possible with support from Watson’s aunt and uncle, who own the land and believe in her mission. The couple’s 35-year-old daughter (Watson’s cousin), Jenny Seth, suffers from hypo cephalic cyst condition, similar to cerebral palsy, and communicates through sign language.

Though she’s allergic to horses, Jenny loves the animals. Her family members, including mom Lorraine Seth, find joy in watching Jenny ride, touch and interact with the towering creatures. “(On a horse) she can move the way we all move rather than having trouble with mobility on the ground,” said Lorraine Seth.

Watching her niece at work with clients has given her a new perspective on the animals she’s always loved.

“They’re just so honest with that person. If they like you and they walk up to you and they want to be with you, they don’t care whether you don’t walk well, or you can’t hear like Jenny, or speak . . . The horses are amazing. They sense all these things and they know who needs what.” 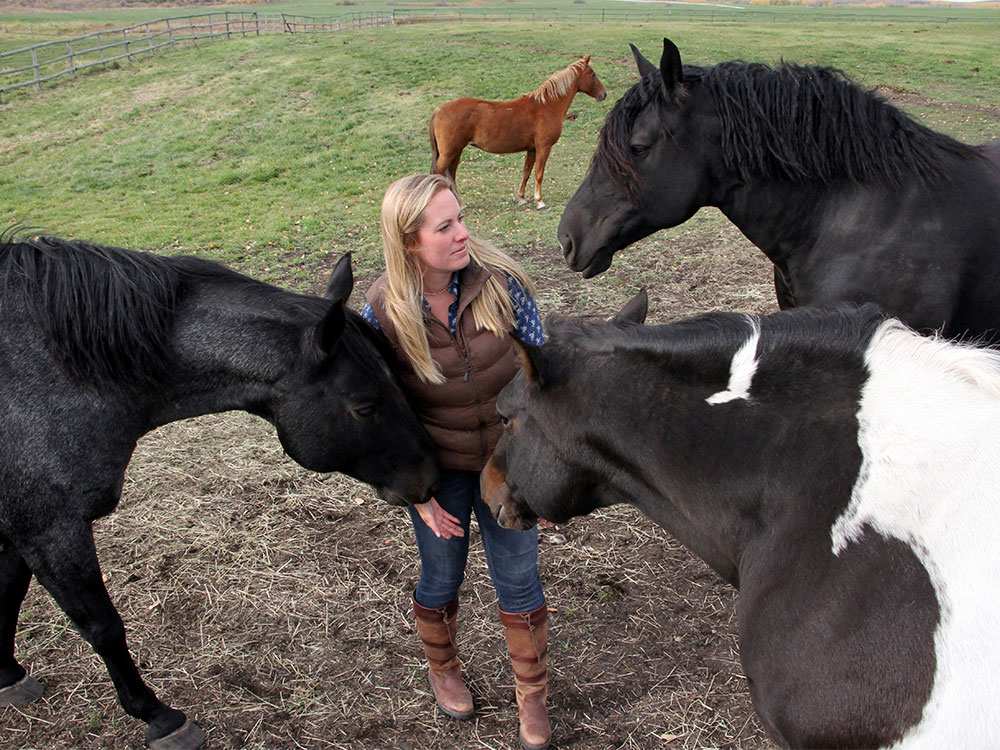 Carrie Watson, founder of Whispering Equine, is surrounded by her horses at her business outside of Calgary. Christina Ryan, Calgary Herald

In fact, the horses freely select which clients they work with. “We go out to the herd and the horses will actually come out to the person that they want to be with.”

In a recent session with a school group, Watson watched a restless horse bond with a boy who had Attention Deficit Hyperactivity Disorder. The typically level-headed horse wouldn’t stand still and wasn’t listening.

“The horse was just testing him and testing him,” Watson said. Though clearly frustrated, the determined boy worked with the horse and, together, they successfully completed a series of exercises. At the end of the session when students were asked what they learned, the boy said, “Patience.”

“For an ADHD boy to have self-acknowledgment of that is huge,” Watson said. “That he had worked through that frustration with (the horse), it was pretty powerful.”

She says students referred to the program often show up at the first session with their arms crossed, eyes focused on the ground and an aversion to communicating. That all changes when they are introduced to a horse.

“The moment they get to touch and pet the horses, you can see the shell come off a little bit,” Watson said. “The more they come back, you’ll see them start to walk in front of their parents… You can just see that they’re more engaged and that they’re wanting to come and they start asking how the horse is doing and stuff like that. They genuinely want to come and be there.”

Watson believes that’s because horses live in the present moment. They are trusting beings that offer comfort, cuddle and calm, despite their daunting size. “They don’t care what your social economic status is, who you are or what you’ve done,” Watson said. “They just care how you are with them at that moment.”