The flexibility of an ankle foot orthosis (AFO) does not necessarily affect walking economy in children with cerebral palsy (CP), but more flexible AFOs may be particularly beneficial for sports activities in higher-performing children with CP, according to research presented in June at the 2015 ISPO Congress. In children with spastic CP and excessive knee flexion during stance, improvement in gait efficiency achieved with AFOs has more to do with kinematic changes than push-off power, Dutch researchers found.

Investigators from Vrije University Medical Center in Amsterdam, the Netherlands, assessed 14 children (mean age 10 ± 2 years) with spastic CP and excessive knee flexion during stance as they walked while wearing shoes only and under three different AFO conditions.

One condition involved wearing a rigid ventral-shell AFO, while the other two conditions involved a spring-hinged ventral-shell AFO, a design concept that has been reported to improve ankle push-off power and improved walking economy in adults (see Finding a formula for the optimal AFO in Lower Extremity Review). The spring-hinged AFO, which allowed 20° to 35° of ankle dorsiflexion, was tested under two stiffness settings, with either a stiff spring or a flexible spring. The children were allowed four weeks to accommodate to each AFO condition before gait analysis was performed.

“We expected that there would be a trade-off between improving knee angle and knee moment during stance and improving push-off power,” said Yvette Kerkum, MSc, a doctoral student in the Department of Rehabilitation Medicine at the university, who presented the findings at the congress.

All three AFO conditions significantly improved knee angle and knee moment compared to the shoes-only condition, and there were no significant differences between the AFOs for those variables. The rigid AFO was associated with significantly less ankle push-off power than shoes alone, but the two spring-hinged AFO conditions preserved it. 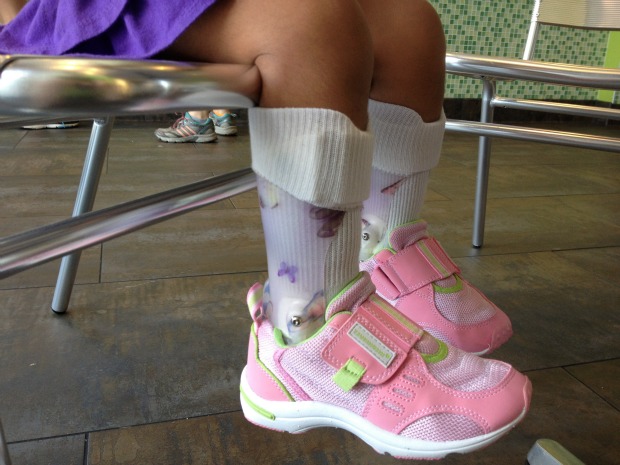 “The biomechanical differences between the devices were not necessarily reflected in the gait efficiency,” Kerkum said. “In children with cerebral palsy and excess knee flexion, improvement in gait may be defined more by kinematics and less by push-off power.”

The benefits of flexible AFOs, however, may be more apparent in children with high-level gross motor skills, according to research from McMaster University Children’s Hospital and Advanced Orthodynamics in Hamilton, Ontario, Canada.

The study included seven children with CP and one with sacral myelomeningocele (age range 7-14 years), all functioning at Gross Motor Function Classification System levels I or II, all of whom were unilateral users of molded plastic AFOs at the time of enrollment. Each child was provided a prefabricated dynamic-response carbon-fiber AFO and given one month to accommodate to the device.

“The dynamic-response carbon-fiber AFO has the potential to provide enhanced performance of high level gross motor skills that are the components of sports and fitness,” said Eric Bapty, CO(C), an orthotist at Advanced Orthodynamics, who presented the findings.

Custom foot orthotics for relief of lower back pain
Sunnyhill Pediatric Clinic
When the shoe doesn’t fit: footwear in Down syndrome
Woman with cerebral palsy says disability benefits rules prevent her from ...
Kids’ physical activity before age 5 matters so much because of the develo...
Maysoon Zayid: I got 99 problems... palsy is just one