Renowned conservative author Charles Krauthammer took great pains to not have his wheelchair show in the media. Fox News

A large portion of the general public had at least heard of Krauthammer — appearing multiple times per week on America’s highest-rated cable news channel will do that — and his influence on modern conservative thought is considerable. What a much smaller percentage knew was that he was a wheelchair user, as he had been living with quadriplegia since a diving accident at age 22 while attending Harvard Medical School.

Both his national prominence and the public ignorance of his disability are of Krauthammer’s own design. He was intensely ambitious, having graduated on time and with honors from Harvard after his accident. During the very brief time Krauthammer was engaged in the field of psychiatry, he won a prize for excellence in psychiatric research. But he quickly grew bored with the profession, and turned his considerable intellect to politics. With next to no experience, he was hired as a speech writer for Vice President Walter Mondale during the Jimmy Carter reelection campaign of 1980. “History is shaped by its battle of ideas, and I wanted to be in the arena,” Krauthammer reflected in 2003.

He rose quickly among the commentariat, taking a job with the influential magazine, The New Republic, before becoming a columnist with The Washington Post in 1984. Krauthammer began his writing career as a “liberal Cold Warrior,” and is credited with coining the term “the Reagan Doctrine” for the policy to provide military support to anti-communist groups throughout the Americas. Later, he wholeheartedly identified as a neoconservative, arguing for robust military force to combat terrorism and leading the chorus of voices arguing for the 2003 invasion of Iraq.

In Krauthammer’s rather lofty “history-shaping” mission, he initially saw his disability as an impediment, not because it in any way affected his professional abilities — thinking, writing and talking — but because of the way people would view him. “That was the one thing that bothered me very early on,” Krauthammer said in a Washington Post interview in 1984, the first time he spoke publicly about his disability. “The first week, I thought, the terrible thing is that people are going to judge me now by a different standard. If I can just muddle through life, they’ll say it was a great achievement, given this.”

To anyone who has lived with a visible disability, personal experience would tell you that Krauthammer’s concerns were valid. Regardless of your ambitions or abilities, it can be difficult to be taken seriously in a world where simply living as wheelchair user — getting out of bed in the morning, going to the store, let alone holding any sort of job — is often seen as an act of courage and perseverance. This was even more true in 1975, when Krauthammer was first seeking to make a post-disability life for himself.

Krauthammer’s general policy regarding his disability, at least professionally, was to pretend as if it didn’t exist. He didn’t write about it, he didn’t speak publicly about issues relating to disability. The only reference to be found regarding Krauthammer and the ADA, when searching both The Washington Post archives and a broader Google search, is a speech he gave for the American Dental Association in 2015. One of the few professional images of Krauthammer owning his disability in full made the rounds after his death. Photo by Michael Temchine, The New York Times via Redux Pictures

For the most part, the media complied with his wish to have his disability hidden, or at least framed in soft focus in the background. On Fox News, he appeared from the chest or shoulders up, wheelchair invisible beneath the scrolling news ticker. Most photos appear with a similar crop or shot from an angle that shows only the barest hint of his chair. A 2014 Newsweek photo shows Krauthammer sitting at his desk wearing a black turtle neck, a whisper of a push handle camouflaged against his shirt is the only visible piece of his wheelchair. In the photo, his right arm is visible, atrophied forearm leading to a hand curled into a loose fist. It’s a fitting illustration of the way he presented himself in the media — his disability is visible, but only if you go looking for it.

Of course, Krauthammer is not the first public persona to ablewash themselves. Franklin D. Roosevelt is the most obvious and prominent example — public figures with disabilities who claim their careers are not about their disability and so choose to hide it from view. That these are most often ambitious white men from privileged backgrounds should not be overlooked. Krauthammer came from money, and enjoyed the kind of mobility where, on a whim, he could switch from studying philosophy at Oxford to enrolling in medical school at Harvard. After his accident, he sued the builders of the pool he dove into and won a settlement around $1 million, which he said, “rights the scales a bit,” referring to the extra costs of living with SCI.

None of that is to say Krauthammer rose to the summit of his chosen profession solely because of his privileges — it’s not possible to do anything as well as he did without uncommon talent, creativity and work ethic — but his financial stability allowed for whatever medical care, supplies and assistance he needed. 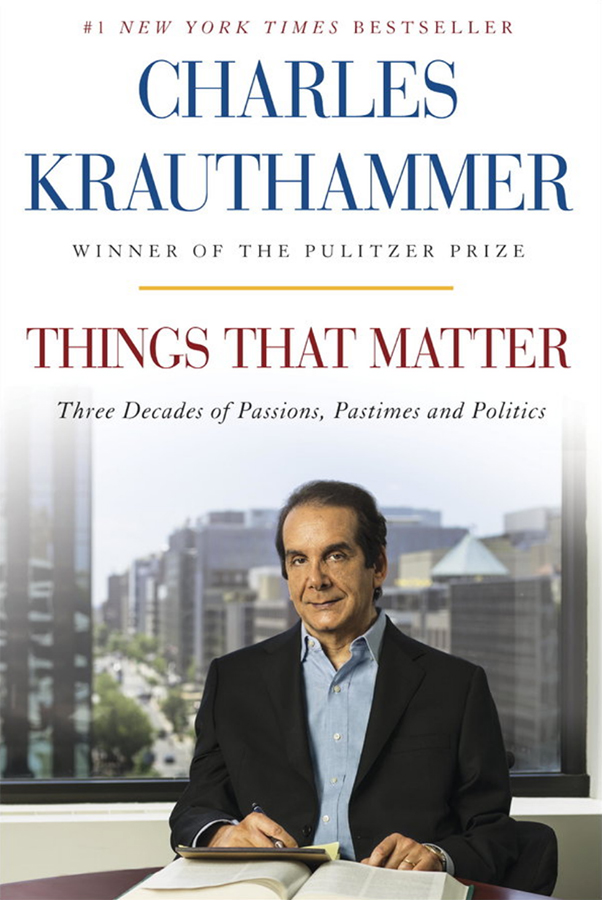 It would be unfair, perhaps, to have expected Krauthammer to use his public platform to advocate for social services, universal health care or an expansion of disability insurance. His political leanings, especially in his later years, precluded any of that, while his chosen lifestyle left him disconnected from the needs and day-to-day reality of most in the disability community. But irrespective of politics or policy specifics, Krauthammer could have made a world of difference in societal perceptions of disability by simply being more open about the whole of his life, wheelchair and all.

The few times that he did write or speak about disability, he did so with eloquence and wisdom. In the 1984 article where he first spoke publicly about his disability, he offered this analogy: “The people who probably understand me best are political refugees in exile… They have to go to a new country where they have to speak a language they have a lot of trouble with. Now, they can express themselves but they never have that wonderful elegance they have in their native tongue.”

As a writer, Krauthammer possessed a rare gift: being able to shift people’s perspectives with the power of his words. Jacob Heilbrunn, the editor for the prominent foreign policy journal, The National Interest, said that Krauthammer, “crystallized conservative thought and exerted influence by setting the terms of public debate at key moments in the nation’s political life.”

This was a man who helped to successfully convince a sizable portion of the U.S. that the regime of Saddam Hussein was a direct and imminent threat to our country and way of life. Persuading the American public that people with disabilities are a valuable, integral part of society, deserving to be seen and treated as everyone else, should have been a rather simple task, comparatively.

Krauthammer was obviously concerned with societal perceptions of disability. We’ll never know what impact he could have made had he chosen to confront those perceptions directly instead of hiding his disability from view.

Obesity in pregnancy tied to cerebral palsy in kids
Do you see what I see? Researchers harness brain waves to reconstruct ment...
Gaming camera could aid MS treatment
It’s a horse, of course: equine therapy
Can AFOs help prevent falls?
There’s an app for that: How two rural counties reached more kids with dev...