HQCA studied 10 years’ worth of data at two clinics that offer team-based model of care.

A new report by the Health Quality Council of Alberta reveals two Alberta primary care clinics — using an alternative funding model for doctors — are saving the health-care system millions of dollars a year. 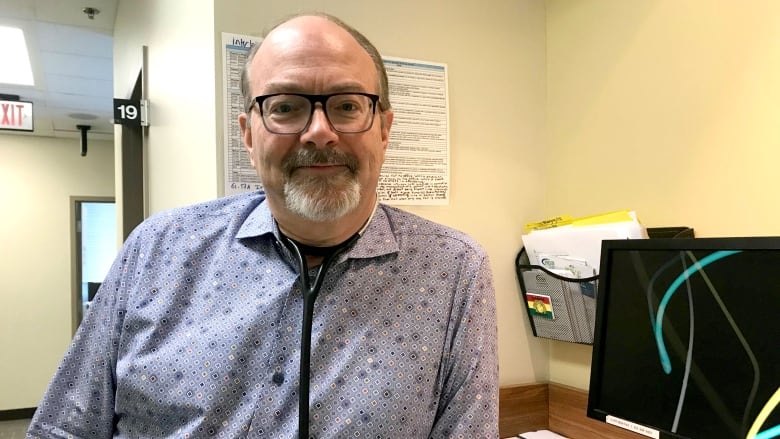 HQCA studied 10 years’ worth of data from Calgary’s Crowfoot Village Family Practice and The Taber Clinic, both of which offer a team-based model of care.

Instead of a fee-for-service payment system used by most Alberta physicians — where doctors bill the province for every patient visit — the two clinics receive yearly block funding from Alberta Health to care for a patient regardless of how often that person is seen.

“We can say very clearly that the experience at both of those clinics has led to better outcomes for their patients and at a lower cost for the system,” said Andrew Neuner, CEO of the Health Quality Council of Alberta.

HQCA found that while these clinics cost the province more upfront, they saved the health care system a combined total of nearly $120 million over 10 years.

According to the report, one of the main drivers of the savings is fewer hospital trips. 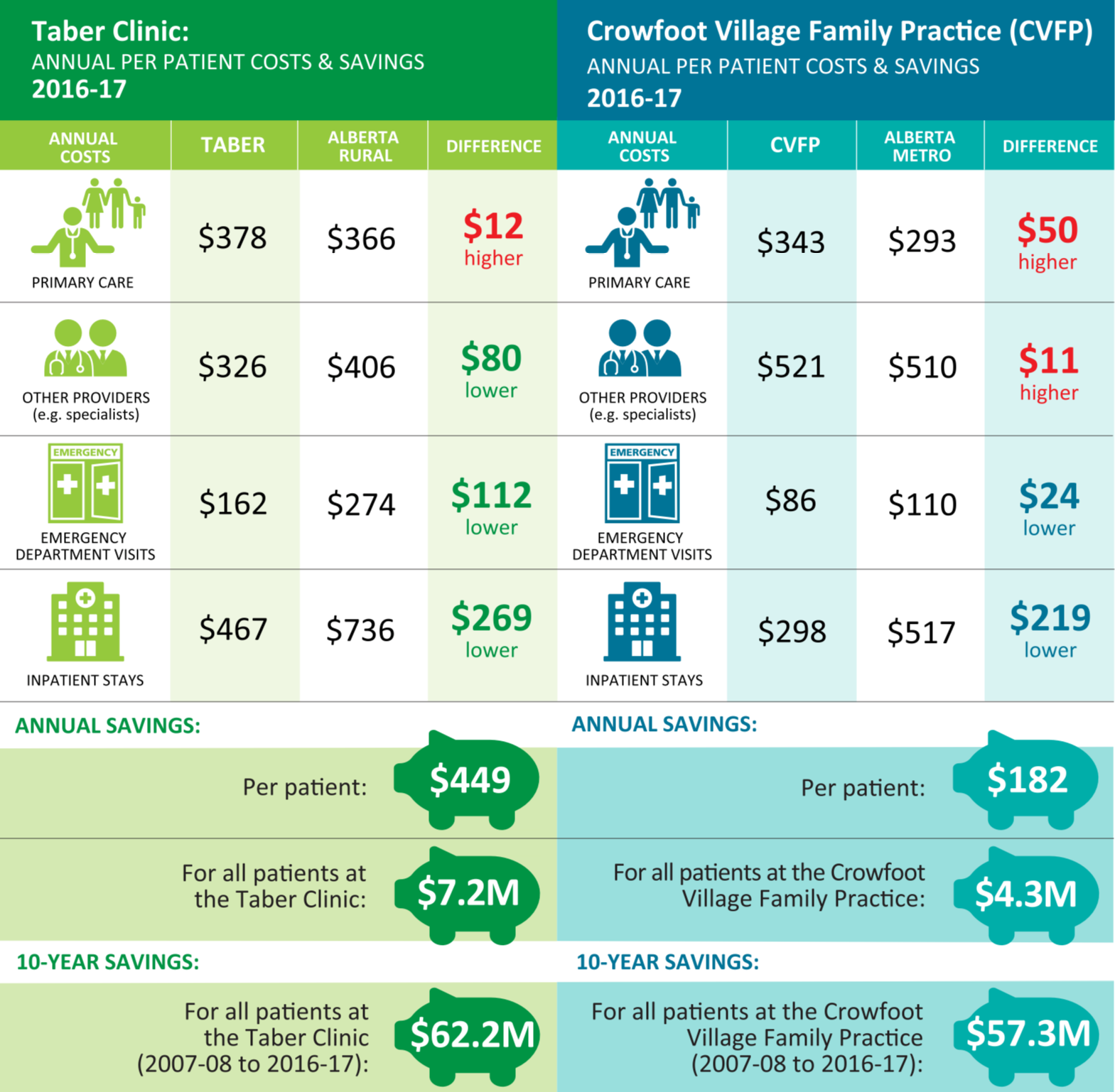 “We know that our patients present to the emergency department less than other clinics. We know that our patients get admitted to hospitals less than other clinic patients. And when they do become admitted their length of stay is shorter,” said Dr. Rick Ward, a physician at Crowfoot Village Family Practice, a multi-disciplinary clinic operating under an alternative funding model since 1999.

The clinic receives a block amount for each of its 24,000 patients — which averages out to $315 per patient/per year, depending on age and gender.

That basket of funding is used to cover overhead costs, hire other health care providers and pay its physicians.

What we’ve shown is that despite the fact that we may be a bit more expensive in the front end, the amount of money that we save downstream in medical costs is huge. Dr. Rick Ward

Beyond family doctors, patients have access to health-care professionals ranging from pharmacists and diabetic educators to nurse practitioners and dieticians.

Because funding doesn’t hinge on the fee for service model — where doctors have to physically see a patient to get paid — Ward said patients may see a different provider depending on their needs.

“You end up having the right patient problem being seen by the right provider,” he said, adding that there are times when patients’ concerns can also be addressed with a phone call or email.

Another benefit, according to Ward, is that patients with chronic diseases tend to be healthier because they have access to health-care providers such as dieticians who work on preventative care.

“What we’ve shown is that despite the fact that we may be a bit more expensive in the front end, the amount of money that we save downstream in medical costs is huge, to the tune of about $4.3 million a year.”

The cost savings at The Taber Clinic have been even more dramatic. According to the HQCA report, the alternative payment model there saved the healthcare system $7.2 million in 2016-17.

“As primary health-care providers, we see tremendous benefit to practicing in an alternate funding model, for our patients, ourselves and the health system in Taber,” said Dr. Andrea Hargrove, partner at The Taber Clinic.

“Our patients benefit from fewer hospital admissions and fewer, more comprehensive, timely clinic visits, from a full functioning multi-disciplinary team. We are hopeful that our model of care can be successfully translated to other communities across the province.”

Despite the cost savings, data from HQCA reveals Alberta has consistently had the lowest proportion of physicians paid through alternative funding models in the country over the last twenty years.

“In other parts of the world — specifically Europe — what we’re describing here is what they would consider normal,” said Neuner.

The HQCA is calling for more widespread use of alternative funding models but because this will require a significant shift it’s recommending the development of a provincial framework.

“No new funding agreements should be implemented without first developing a provincial alternate funding model framework that describes the key elements to support the development and implementation of alternative funding agreements,” stated the report. 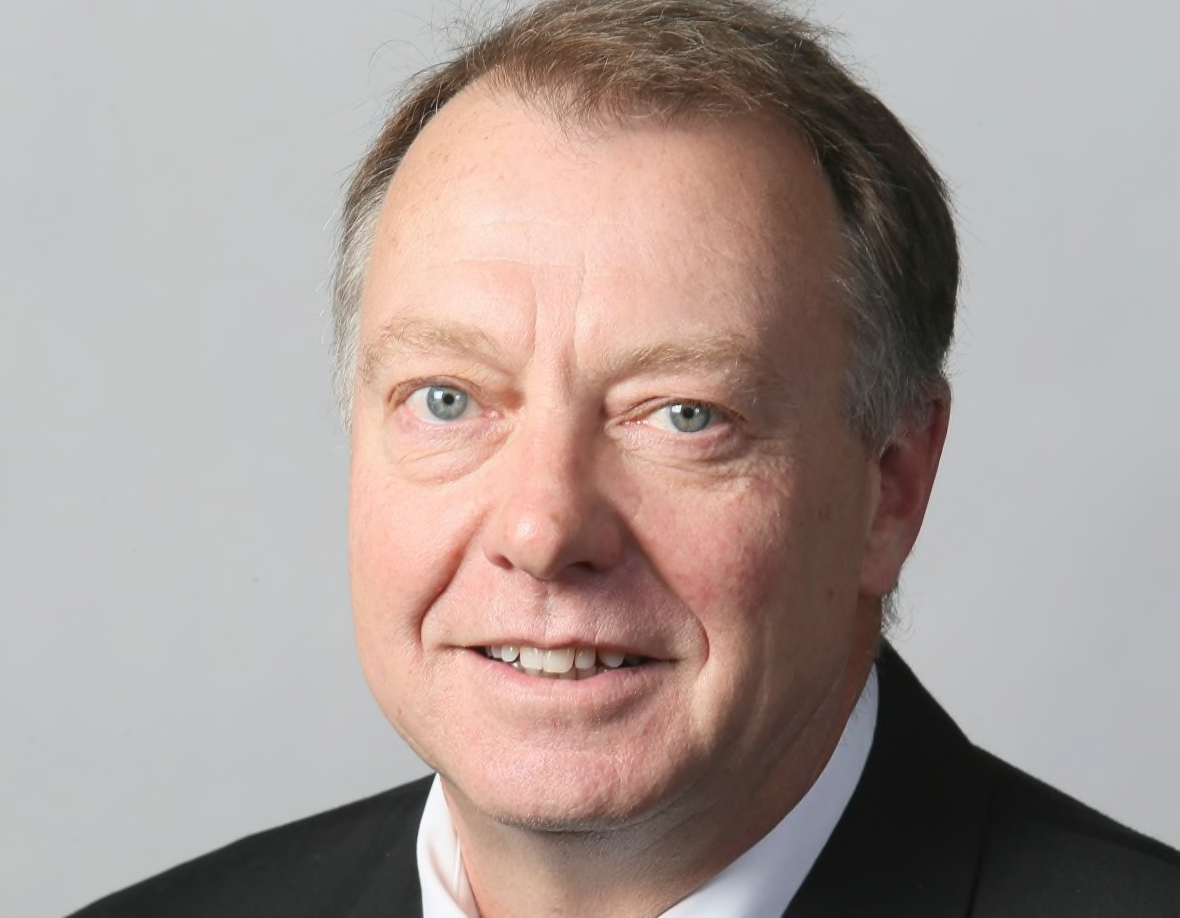 Andrew Neuner is the CEO of the Health Quality Council of Alberta. HQCA

According to Neuner, the needs of different populations would have to be considered and the framework would allow clinics considering an alternative funding model to learn from the work that’s already been done.

“What works and where the challenges are so that new clinics who want to work in this way can get to the place where Crowfoot and Taber are much quicker than they did because they had to learn all this for the first time,” he said.

Dr. Christine Molnar, president of the Alberta Medical Association, said the AMA was an early proponent of alternative funding plans.

“It’s rather ironic, though, that as this Health Quality Council of Alberta report has been released — advancing the Medical Home and comprehensive care — that government is proposing to eliminate or slash time modifiers that will mostly impact patients with complex, multiple, chronic conditions,” she said in an emailed statement.

“We would like to see an increased presence for [alternative funding plans] in Alberta. It is, though, a cumbersome process to establish one of these arrangements and Alberta Health tells us their systems can’t handle a high volume.”

The HQCA report has been shared with Alberta Health and it comes just three months after the MacKinnon panel — tasked with finding ways to curb provincial spending — recommended moving more doctors to alternative payment plans and away from traditional fee-for-service, calling it “very expensive.”

CBC News has reached out to Alberta Health for comment but did not receive a response in time for publication.

“I think the [health] minister and Alberta Health are very receptive because the evidence is clear. Over time this does save money, which is an important factor right now. But it also improves outcomes, so it’s the best of both worlds,” said Neuner.