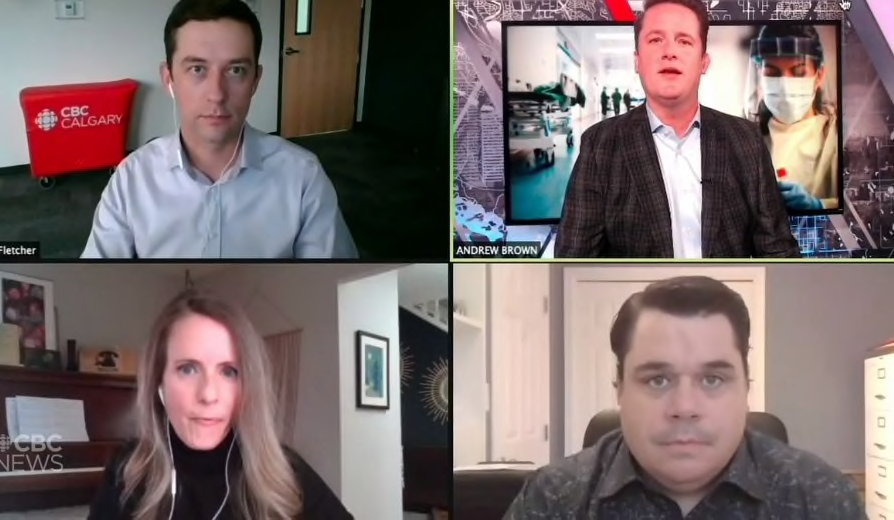 With COVID-19 case numbers continuing to sharply rise in Alberta, CBC News hosted a live discussion on Facebook with a panel who has been following the pandemic closely.

This conversation has been edited and paraphrased for clarity and length.

CJ:  I would have to agree. We’re looking now at pushing 600 cases a day. We’re talking two months away. Still, unless things change, unless these curves begin to flatten, we will see that.

We’re hoping it doesn’t have to be mandated or legislated. But if we reduce our contacts — not our social contacts, but our physical contacts — if we limit those cohorts, as asked by the province, if we step up our mask game, so we’re not wearing it under the minimum recommended circumstances but anywhere where we can’t maintain physical distance. If we look at what are our truly elective activities. Should kids be in three, four recreational sports at this particular time? Probably not, as much as we would like it.

RF:  Looking at all these numbers from Alberta, across Canada and around the world, since March, one thing that’s struck me is how predictable some of this stuff is.

As Craig said, if things don’t change, the trajectory of the spread is quite predictable.

The question is, will behaviours change, have behaviours changed? And the data we’re seeing is always sort of lagging behind what’s happening in the real world, so it’s giving us a picture of what happened a week or two ago.

But yeah, that’s what’s striking to me, is that it’s really quite predictable. The question is, will behaviour change?

CJ:  Basically, an R-value in a nutshell is how many people we can expect one infected person to transmit the virus to. So you can imagine an R-value of 1. So with each sick person only one additional person gets sick, and the number of infected people in the community would stay pretty consistent. R-values getting above one mean that each infected person is spreading it to more than one person. This is where we get our exponential growth.

RF:  This is actually something that Dr. [Deena] Hinshaw actually mentioned in her prepared remarks at her Tuesday briefing. She said she’s working with AHS to try to bring more detail into the public realm. There are some issues, as there often are, when it comes to confidentiality. But she said Alberta Health is working with AHS on bringing more of that detail out. She said it’s still a work in progress and didn’t really offer a specific timeline, but it’s something the province is working on.

I’ve heard that question from a lot of people and we just don’t know, now, some of those answers.

CJ:  This is obviously critical information to have if we want to have targeted restrictions. The more we know about where people are getting the virus allows us to better focus the resources. I think one of the difficulties we’re having is that there has been an increasing trend of reluctance of people indicating where they may have been exposed.

JL:  Politicians and public health care experts would argue that our health-care system will be overwhelmed and quickly. And if you look at the numbers of hospitalizations and ICUs, we are now at a critical point. We’ve hit an all-time high in COVID hospitalizations.

And there’s the human dimension. If we just live with the virus, there will be countless deaths.

RF:  It’s a tough question, but I would point out a few things. One, deaths aren’t so low. We’re back at the highest rate of deaths we’ve seen in the pandemic to date. They are relatively low to some other jurisdictions, notably the United States, but we’re back to almost four deaths per day, which is as high as we’ve seen, ever.

Two, things can get out of control really fast.

The virus looks to be out of control in Winnipeg, and that came out of the blue in a place where everything looked to be fine not too long ago.

CJ:   is a weird virus, a very challenging virus. And simply looking at a hospitalization or mortality column, I think, really underestimates the impact this does have on health.

As was pointed out at the beginning of this discussion, it has obviously an impact on the economy and on the mental health of people who are not infected. But we need to look at the bigger picture, not simply hospital cases versus jobs in the province, if we want to understand how to best look after our neighbours.

Perhaps the single biggest difference is that we actually have a treatment for flu, or we have a preventive measure. And that is, we do have an effective vaccine program that has been shown to keep people out of hospitals.

The viruses themselves, COVID appears to be more deadly. And that’s a problem.

In Alberta we’ve already lost more people to COVID this year than in an entire typical flu season. So these are all stark warnings that this is not simply another flu.

CJ:  We are, for the most part, at least early in the pandemic, a victim of our own success. People hear voices on radio and on TV saying this could get very bad, and throughout July, August, it didn’t get very bad. We did a fantastic job of keeping numbers down. And I think that really lulls us into a false sense of security.

JL:  We are hearing a lot of calls for more targeted lockdowns. I’ve talked to a lot of doctors and infectious diseases experts who are saying, given what we’re seeing with the numbers, maybe we don’t move to a provincewide lockdown but bring in some more targeted measures.

So, an expert I spoke to the other day said, ‘I’d really like to see those mandatory restrictions in Calgary and Edmonton come down even further.’ This person was saying perhaps from 15, which is where they are now for social gatherings, to 10.

Other folks are saying, maybe for a short period of time, shut down places like restaurants and gyms in targeted locations. A lot of people would push back against that.

But I think, overall, what I’m hearing is calls for more of these targeted, and more severe targeted restrictions, even if they’re temporary, just to try to bend that curve.

Lucy Meyer reveals what it's like to be a Special Olympics gold medalist w...
Nonsynostotic deformational plagiocephaly: Understand, screen, and interve...
Umbilical cord blood improves motor skills in some children with cerebral ...
Are you worried your baby's head has a flat area on it?
I just want to dance again
Is hip arthroscopic surgery a sham?