Jeremy King, 37, takes son Phoenix for a stroll using a car-seat connector that high school students in Maryland created for him. Chelsie King. The Washington Post

Jeremy King thought he’d probably be deprived of the simple pleasure of taking his child for a stroll. It was something he desperately hoped to do.

After undergoing brain surgery in 2017, the 37-year-old Marylander was left with mobility and speech challenges. Although his cancerous brain tumor — which was “about the size of a baseball,” he said — was successfully removed, he faced a fresh set of obstacles after the operation.

“Even going out on a walk is so incredibly difficult for me,” said King, adding that balance is his biggest struggle, and he often uses a wheelchair to get around. 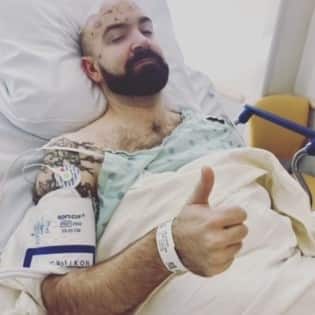 When he and his wife, Chelsie King, 32, found out they were expecting their first child in June 2020, they were ecstatic — but the news also sparked concerns for the couple, who live in Germantown, about 30 miles from D.C.

Mainly, they wondered: “How are we going to parent safely? How might Jeremy carry the baby without having to walk?”

While searching online for devices that might assist Jeremy with safely carrying their child, they found little information. Although there are design ideas for wheelchair adaptive strollers, there are limited options to purchase them.

Getting outside and taking your baby for a walk in a stroller is something that a lot of people take for granted,” Chelsie said.

But fortunately for them, a group of 10 innovative high school students spent several months crafting products that would ultimately enable Jeremy — and other parents with mobility challenges — to safely stroll with a child. 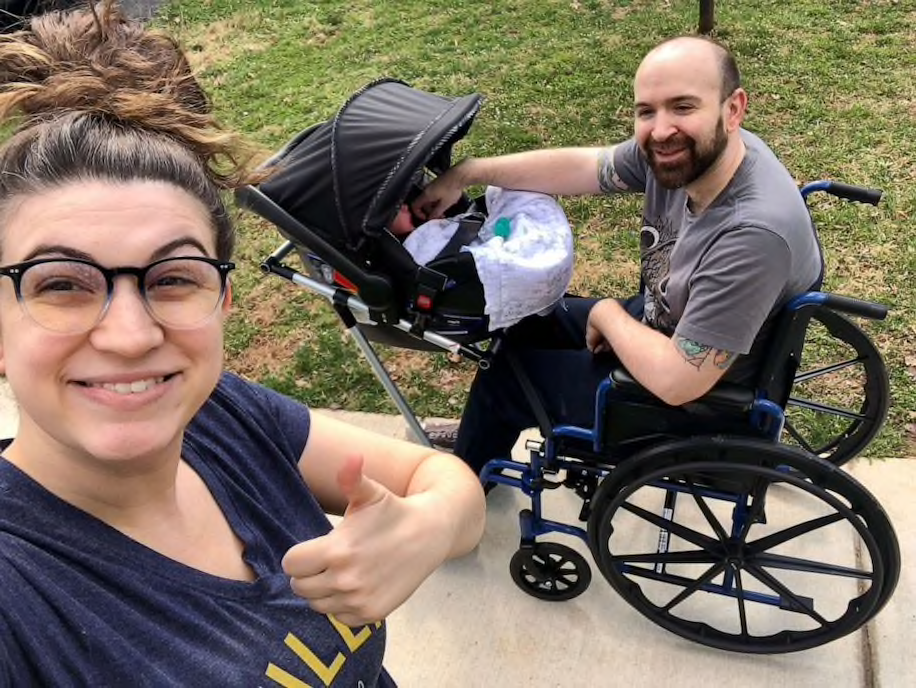 Chelsie King with her husband and son on a walk in Germantown MD. Chelsie King. The Washington Post

The project started after Chelsie, a middle school drama teacher at Bullis School in Potomac MD, shared her concerns with a colleague, Matt Zigler, who runs the independent school’s “makerspace” — a creative lab where students are encouraged to participate in hands-on projects.

I approached him as a personal favor. I know he’s a whiz at building things and is an incredibly collaborative person,” she said.

She expected him to spitball a few potential ideas, but instead, Zigler — who teaches an elective course called “Making for Social Good” — asked her for permission to consult with his high school students.

It seemed like that would be a perfect project that would engage the kids and result in a successful end product,” Zigler said, adding that the class focuses on creating innovative products that have a positive impact on society.

previous years, students made durable metal information cards engraved with various resources as part of a kit that was distributed to homeless people, as well as solar-powered cellphone chargers that were sent to Africa.

In this case, though, building a product that would directly benefit someone in their own community felt “especially meaningful,” Zigler said.

When he pitched the idea to his students “they were all very excited about it,” he said. 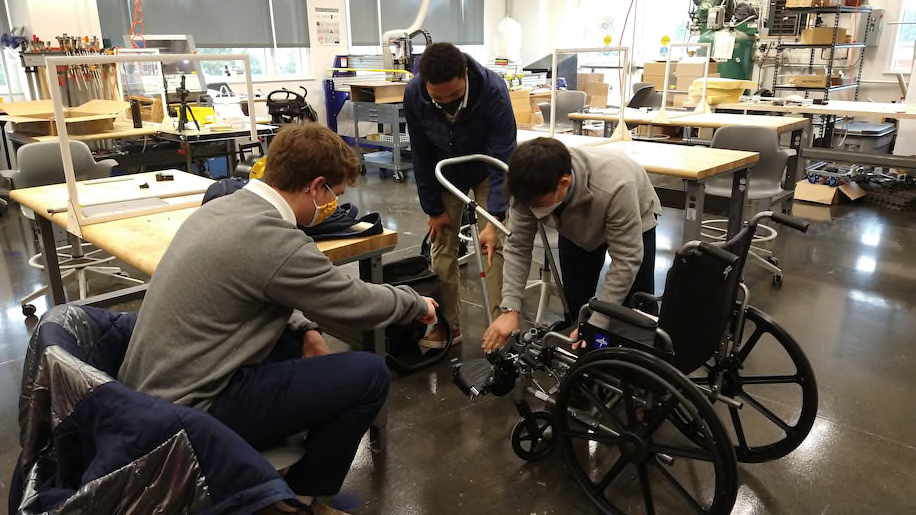 Plus, he added, given that the class is a trimester course which ran from November to March — ending just around the March 4 due date for the baby — “it lined up very well, and gave the students the time crunch they needed to stay focused.”

The students went straight to the drawing board in November and began with basic brainstorming, which included simply sitting and navigating in a wheelchair, while trying to imagine how Jeremy could safely stroll with his child.

“A big part of the course is developing empathy for the person you’re designing for,” Zigler said.

Evan Beach, 15, who just completed ninth grade, said the early stages of the process highlighted “the simple tasks that we take for granted.”

Using a wheelchair that they borrowed from the nurse’s office, as well as two strollers and a car seat that were donated to the class, “they started with low-tech experiments to see what might work, and then once those proved that they had some potential, they spent time refining them,” Zigler said. 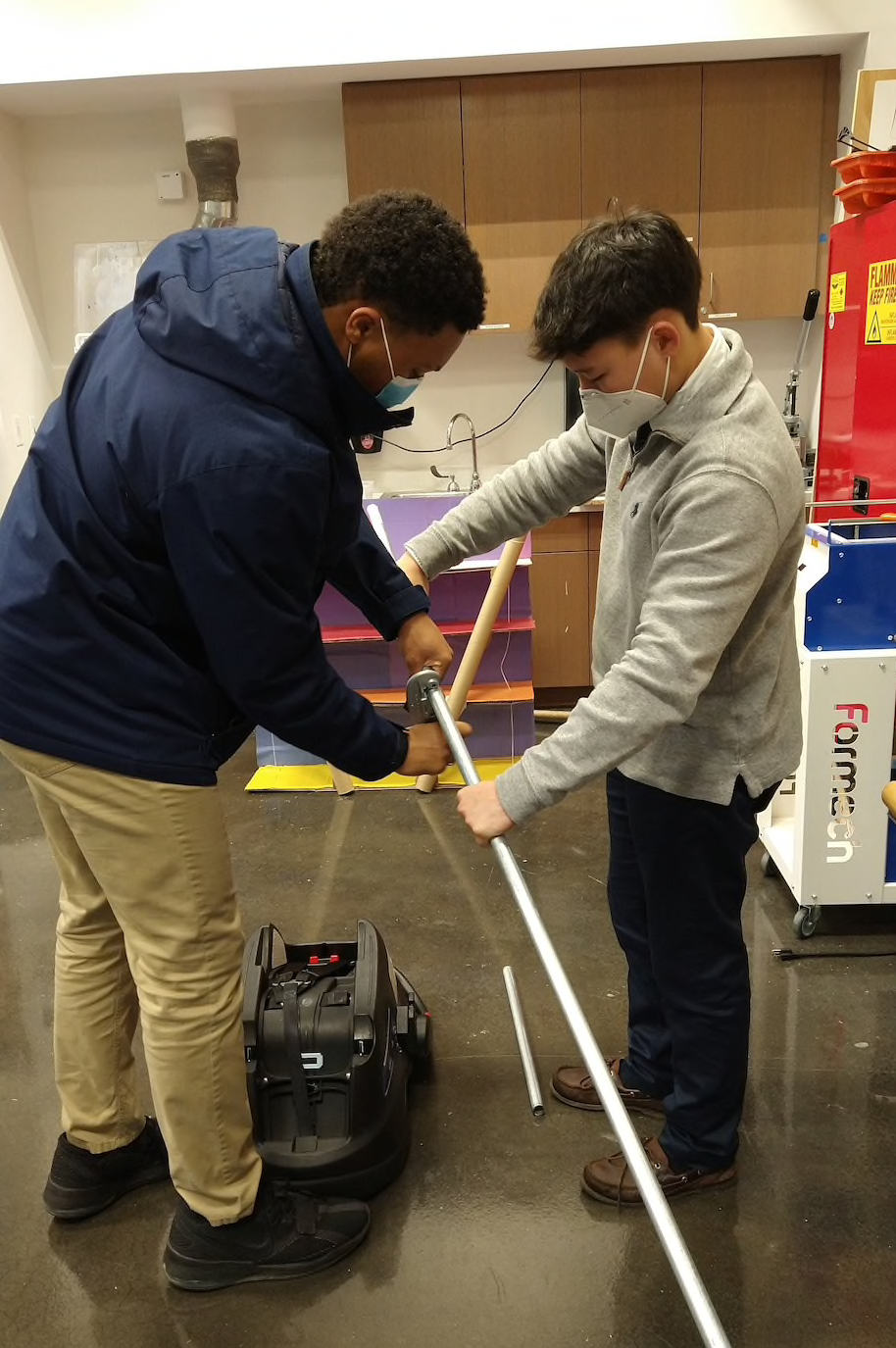 Jewel and Evan work on the attachment using simple supplies such as metal tubes from Home Depot. Matt Zigler. The Washington Post

The class, which decided to name the project “WheeStroll,” was divided into two teams: One group set out to build an apparatus that would attach an infant car seat to a wheelchair, while the other sought to create a contraption that would safely secure a stroller to a wheelchair for when the child is older.

Once the students devised early-stage blueprints for their respective products, they conducted a virtual interview with the Kings to hash out critical details, including what terrain Jeremy expected to travel on, and what weather he would consider going out in.

After the interview process, students became even more determined to help the family, they said.

“It was really soul-touching talking to them because we really got to understand what they were thinking and their idea of what they wanted,” Evan said.

“I was already really passionate about the project, but just talking to them, seeing their faces and hearing them explain the problem made me that much more inspired,” added Jacob Zlonitsky, 18, who is headed to Boston University in the fall.

Communicating directly with the students was also meaningful for the Kings, as they felt their needs were being carefully considered during the production process.

“I was ecstatic to connect with these students,” said Jeremy, who was a nurse anesthetist before his brain surgery and now works on the administrative side of anesthesiology. “They raised important points that we hadn’t even considered ourselves.”

Both teams had three central design goals: safety, maneuverability and ease of use. They also aimed to make the products as cost-effective as possible without sacrificing quality.

While one group embarked on a more complicated route and used a 3-D printer to create connectors to attach a stroller to a wheelchair, the other team purchased simple materials including screws, Velcro cable ties and metal tubes from Home Depot, totaling less than $100.

“One of the goals of the class is to make something that can be cheaply and easily replicated by anyone who has access to some tools and a little knowledge,” said Zigler, who publicly shared a detailed video tutorial explaining how to make the wheelchair attachment, and has received multiple messages from people planning to re-create the product.

Through trial and error, the students produced many iterations of each design, until finally landing on a solid prototype. They connected several metal pipes to securely attach the car seat to the wheelchair and conducted weight tests using 55 pounds of cinder blocks to ensure that the mechanism could safely support a baby.

Although they are still running safety tests on the 3-D printed version, Zigler delivered the completed car-seat connector to the Kings just days after son Phoenix was born.

A few weeks later, the couple tested it out and shared a video of the first ride with the class. 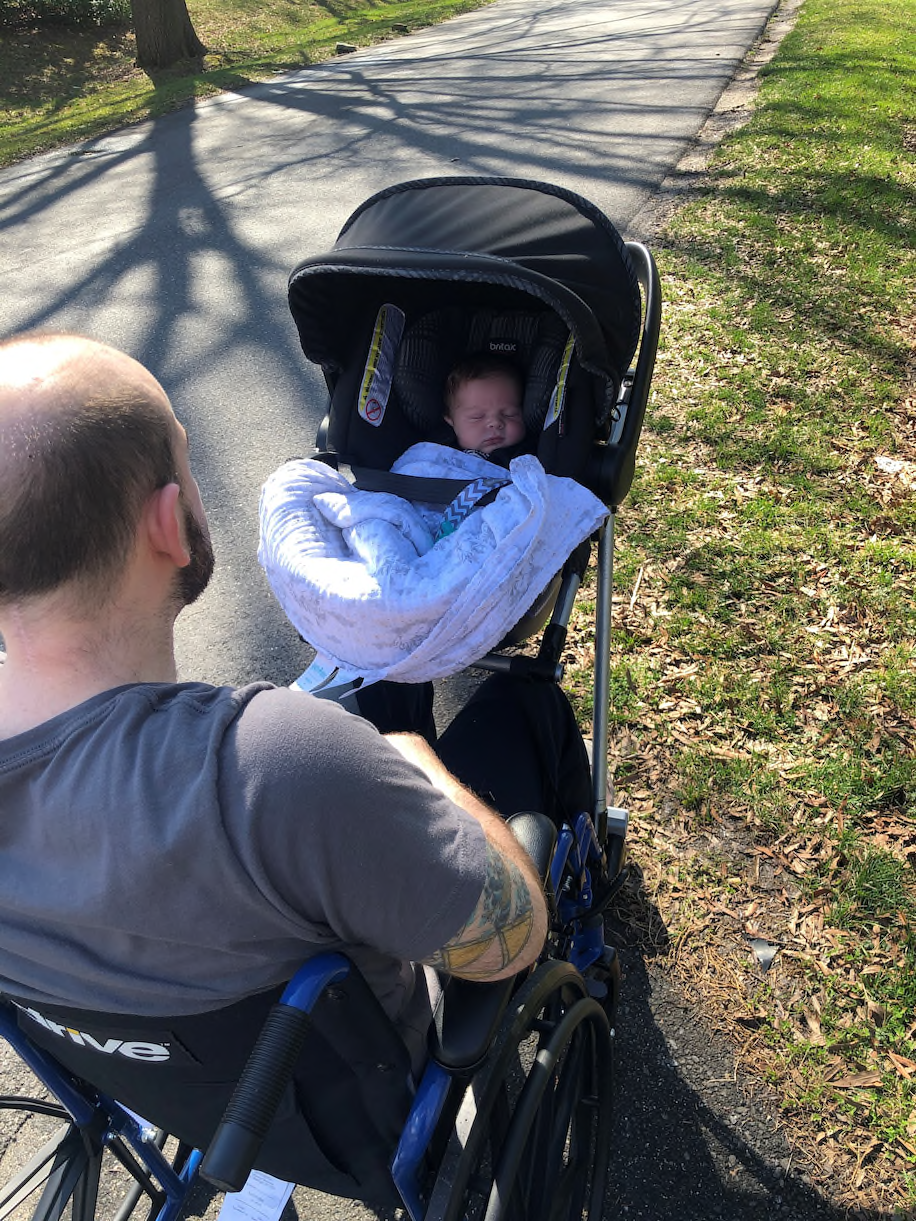 “I was elated,” Jeremy said. “I was really excited to see what they could pull off.”

“It was emotional to see it all come together and [to] put Phoenix in it for the first time,” Chelsie said.

Zigler and his students were proud of their work.

“Seeing the video was like hitting a home run. It felt really good,” Zigler said. “It’s super-gratifying to know that it’s being used and is helping someone.” 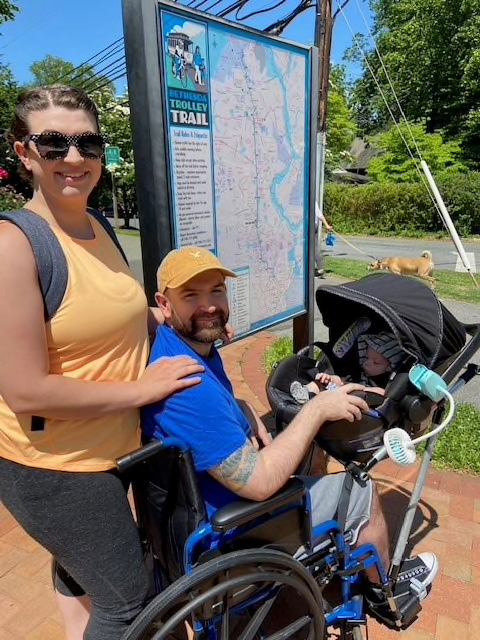 The Kings at the Bethesda Trolley Trail during Memorial Day weekend. Courtesy of Chelsie King. The Washington Post

Since receiving the wheelchair attachment in March, Jeremy has taken Phoenix on numerous outings and adventures, including to the Bethesda Trolley Trail, a place he’d long hoped to visit with his son.

“These students gave me the opportunity to do something I thought I would never be able to do,” Jeremy said. “I’m really grateful.”