But parents say their kids need the support. 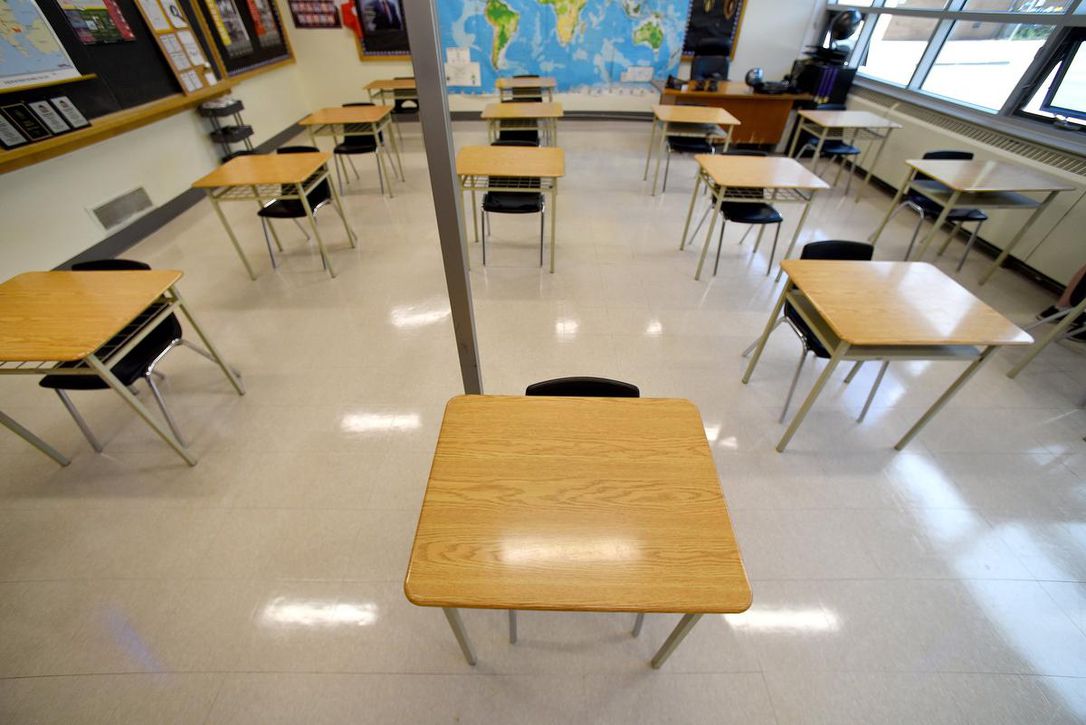 While the rest of the province is hunkering down under new, stricter stay-at-home orders, Jim Rossiter is his usual place — with students in his classroom.

Rossiter is a special-education teacher at Maxwell Heights Secondary School in Oshawa and, even with most schools shuttered amid surging COVID-19 numbers, he is teaching in-class, as in-person learning continues for many students with disabilities.

His heart is with his students, but he worries about the safety risks the kids and his fellow staff members face being together in a classroom while the rest of the province is in lockdown amid a 28-day state of emergency.

“Everybody’s shut down, but yet we’re still going in and not social distancing properly with the students that we have, because we can’t,” he said, adding his students are unable to physically distance and cannot wear masks. 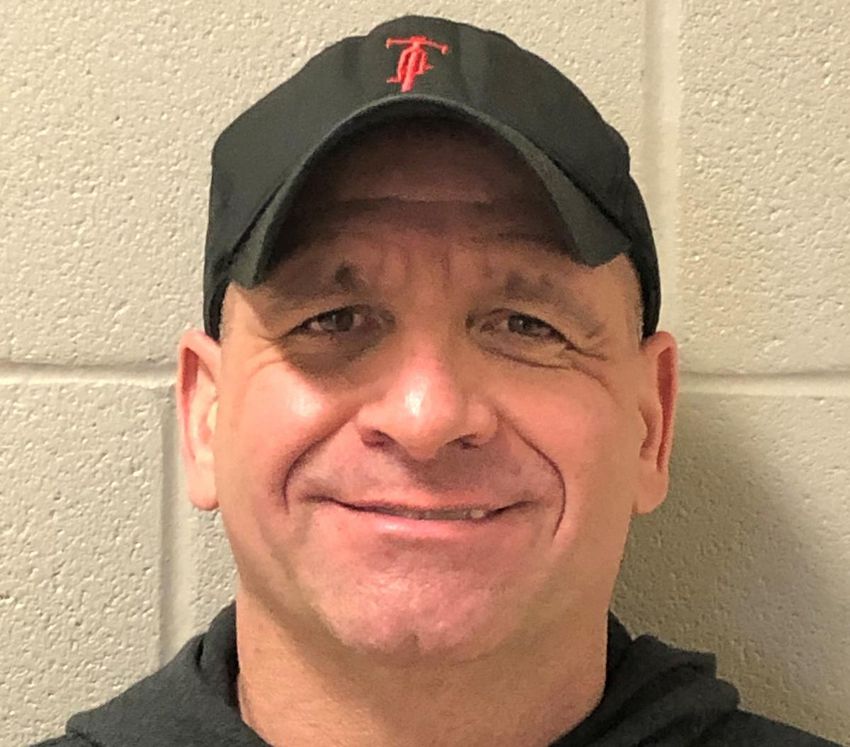 Jim Rossiter is a special education teacher in Oshawa. He says he’s concerned for the safety of staff and students as classrooms have reopened for children with disabilities across the province. Supplied photo

Schools in COVID-19 hot zones including Toronto, Windsor, Hamilton, York and Peel regions are offering online learning only after the Ford government pushed their in-class reopening date to Feb. 10, under emergency orders announced Tuesday. And schools in other parts of southern Ontario will keep learning virtually until later this month.

But Ontario has left it up to individual boards whether to allow parents the choice to send their children to school if they are enrolled in a special education program.

The Durham District School Board, which is the board Rossiter teaches in, said 42 of its schools are currently open to support 392 students for in-person learning. Most of the 15,000 students enrolled in special needs education classes are learning virtually, the board said.

Ontario’s Ministry of Education has made it clear boards must provide in-person supports for students with “special education needs who cannot be accommodated through remote learning,” said Ryan Bird, spokesperson for the TDSB in a statement. 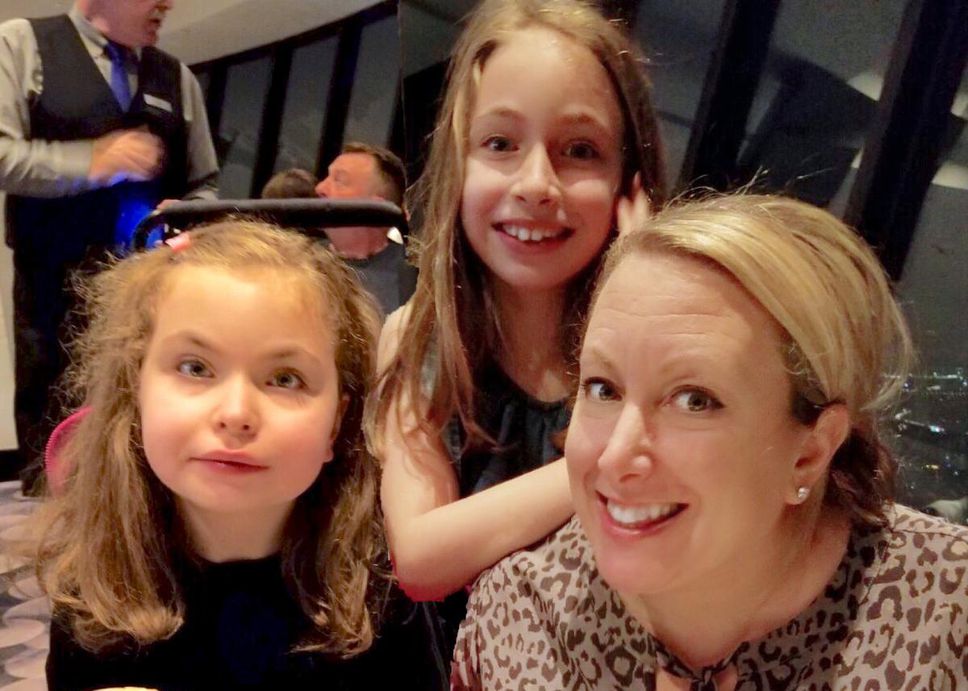 Jo Arbus, with her twin daughters, Lily, far left, and Sienna. Lily is non-verbal and non-mobile due to a rare illness, but thrives in a school setting, Arbus says. Supplied photo

For parents with children who have severe developmental and learning disabilities, having the option to send their child to class makes a massive difference for their well-being and care. Several parents told the Star virtual learning is impossible for their children and they require the structure of a classroom.

Jo Arbus’ daughter Lily is one of the students now attending in-person classes at Beverley Public School in downtown Toronto, which the TDSB describes on its website as a facility with “intensive special education programming.”

She says it’s impossible for her daughter’s significant needs to be met virtually.

Lily,10, has a rare illness called beta-propeller protein associated neurodegeneration, which means she is non-verbal and nonmobile, said Arbus.

“She is not intellectually delayed and loves reading, especially Harry Potter books. She communicates using an eye gaze device along with several of her classmates. She is very social,” she said.

During the first lockdown that began last March, when there was no in-person class available for students with disabilities, Lily experienced regression and became withdrawn, said Arbus.

“She was using her communication device less, physically her body suffered greatly without her usual school daily routine,” she said, adding at school, she has time in her wheelchair along with a stander and a walker to help her mobility.

She fears there could be permanent damage to Lily’s development if she’s away from the professionals in the classroom.

Arbus, who works as a clinical pharmacist in the neonatal intensive care unit of a Toronto hospital, says she understands the concerns of staff at schools as they are working on the front lines.

She says they should all receive vaccine priority and she can empathize with their current fears.

Both Arbus and her husband are front-line workers and she says the staff at Lily’s school have been incredible. They haven’t seen family or friends since the pandemic started, specifically to keep Lily and staff that interact with her safe, she said. 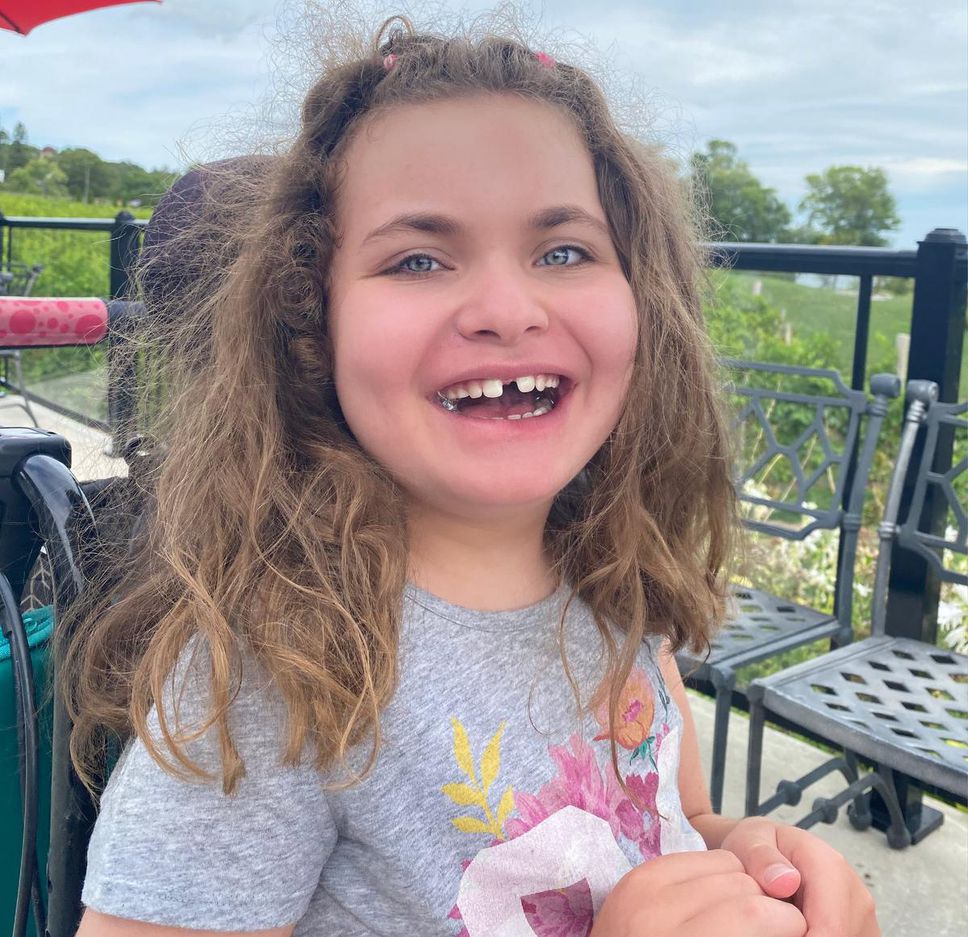 The province should provide schools that need to remain open with the resources they require to continue as safely as possible, she said.

“I think they should be prioritized, up there with long-term-care workers,” she said. Keeping schools open for children with urgent needs is crucial health-care during the pandemic, Arbus explained.

However, some teachers and education assistants who are still working in schools at a time when the province faces rising COVID-19 infections as well as confirmation of several Ontario cases of the more contagious U.K. variant, say they do not feel safe.

Several education assistants who help teachers in classrooms and often work in close contact with students including with their toileting needs, contacted the Star to express concerns for their safety and to stress that all students need to be kept home for now. All said they care deeply for the students and understand they have urgent needs — but they feel the province is in a dire situation with COVID-19 and in-classroom learning should not continue.

Rossiter says he takes no issue with the Durham school board and that his principal has been doing everything possible for staff and students under the circumstances.

But he says he and his educational assistants are putting themselves at risk coming into the classroom every day to assist the three to four students he has in his class.

“What I think should happen is if they’re shutting everything down, they need to shut it down, even for these kids right now,” he said, adding several of the kids he teaches have suppressed immune systems, so their safety is also a concern.

Laura Walton, president of the Ontario School Board Council of Unions under CUPE, says in southern Ontario every school board has some students in their buildings during the current lockdown.

If staff are required to go in now, they should have additional pandemic pay and have more health and safety protocols than are currently in place, said Walton. As front-line workers, they do not feel supported by the province, she said.

“They’re fearful because they’re going in to work… in situations where children, through no fault of their own, are unable to wear masks,” she said. “They don’t have N95 masks. They don’t have proper ventilation.” 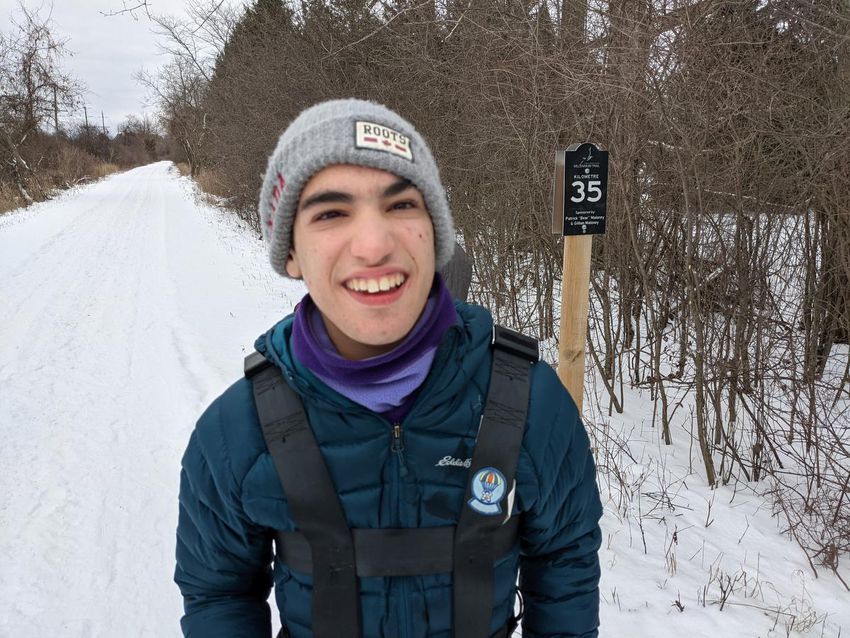 On Friday, Mike Schreiner, leader of the Green Party of Ontario, said in a statement that while in-class learning is important for students with special needs, the province has a responsibility to implement additional safety measures for staff and students.

“Schools will not be made safe with a stroke of luck. Students, educators and parents deserve clarity and action,” he said.

Educational assistants, who do work that can be seen as similar to personal support workers at long-term-care homes as they often feed and diaper students, need to be treated as such and prioritized for vaccinations if schools are to be kept open, said Walton.

In a statement, the Ministry of Education said experts in the “special education community” have recommended that the province “ensure the most vulnerable kids who cannot participate in remote learning, can continue to benefit from routine and consistency in-class, coupled with the continuation of strong health and safety measures.”

Currently, the province has invested $7.5 million toward teacher training for students with autism along with $52.5 million for “special education” and mental health during the pandemic, said Caitlin Clark, spokesperson for the minister.

As an educational assistant for the Toronto District School Board, Cristina Pinto said while she isn’t working in classrooms this month, she’s a union representative for CUPE 4400 and saw first-hand the poor ventilation in classrooms.

She says current staff members are at risk in their classrooms and the Ontario government is not providing enough support.

“I am also thinking about the kids. We all do. We all try to put the kids first,” she said. “But as someone who represents the educational assistants, I’m concerned because they don’t have a choice.”

Clark said meetings with parents over the past few months and consultations with Physicians of Ontario Neurodevelopmental Advocacy, a doctors’ advocacy group, highlighted the importance of in-person classrooms for students with disabilities.

Experts told the province closures of schools for those students could lead to long-term mental health impacts and losses in functioning, she said. Most students with special needs are learning remotely if it’s possible during this time and schools are open for students who absolutely cannot learn at home, Clark added. 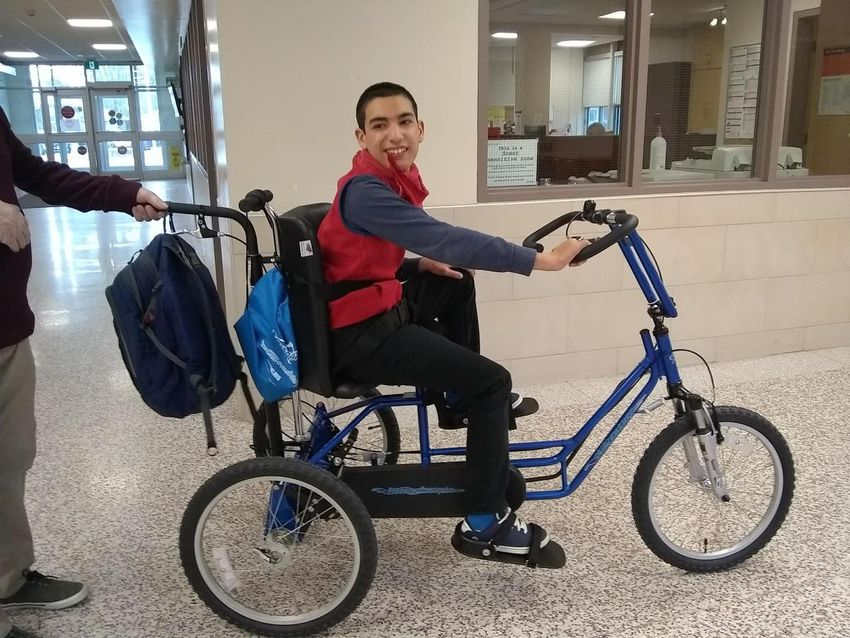 Rodrigo, a high-school student in Prince Edward County, is pictured riding a bike at his school. His mother Nini Mendes says Rodrigo’s development relies on in-class learning, and their family is grateful he is still able to attend classes. Supplied photo

The ministry has also continued to provide deliveries of personal protective equipment including faceshields, face masks, coveralls, and gowns. Around 95 per cent of schools have received “improved” ventilation systems as well, which include 20,249 portable HEPA filters, said Clark.

Nini Mendes, whose son, Rodrigo, attends in-person classes at Prince Edward County Collegiate Institute in Picton, says he requires in-classroom care as they no longer have a personal support worker at their home due to the pandemic.

Rodrigo, 16, has been diagnosed with Christianson Syndrome, a disorder that impacts the nervous system. She likens his development to that of a one-year-old child.

The first lockdown when schools were closed severely impacted his mental health, and he started to withdraw, she said.

“Taking care of him, he needs full care: diapering, feeding, clothing, bathing. Going to school is so important to him and also the family,” she said.

Teachers and educational assistants are essential workers who educate and care for vulnerable populations including her son, and everything possible needs to be done to improve their working environment so the schools can remain open, Mendes said.

“They need the support… they need to have more respect. Unless you have a disabled member of your family, you don’t realize it, but they are essential workers. These students need them.”