Will the large numbers of people with disabilities from COVID make our society more accessible and inclusive? 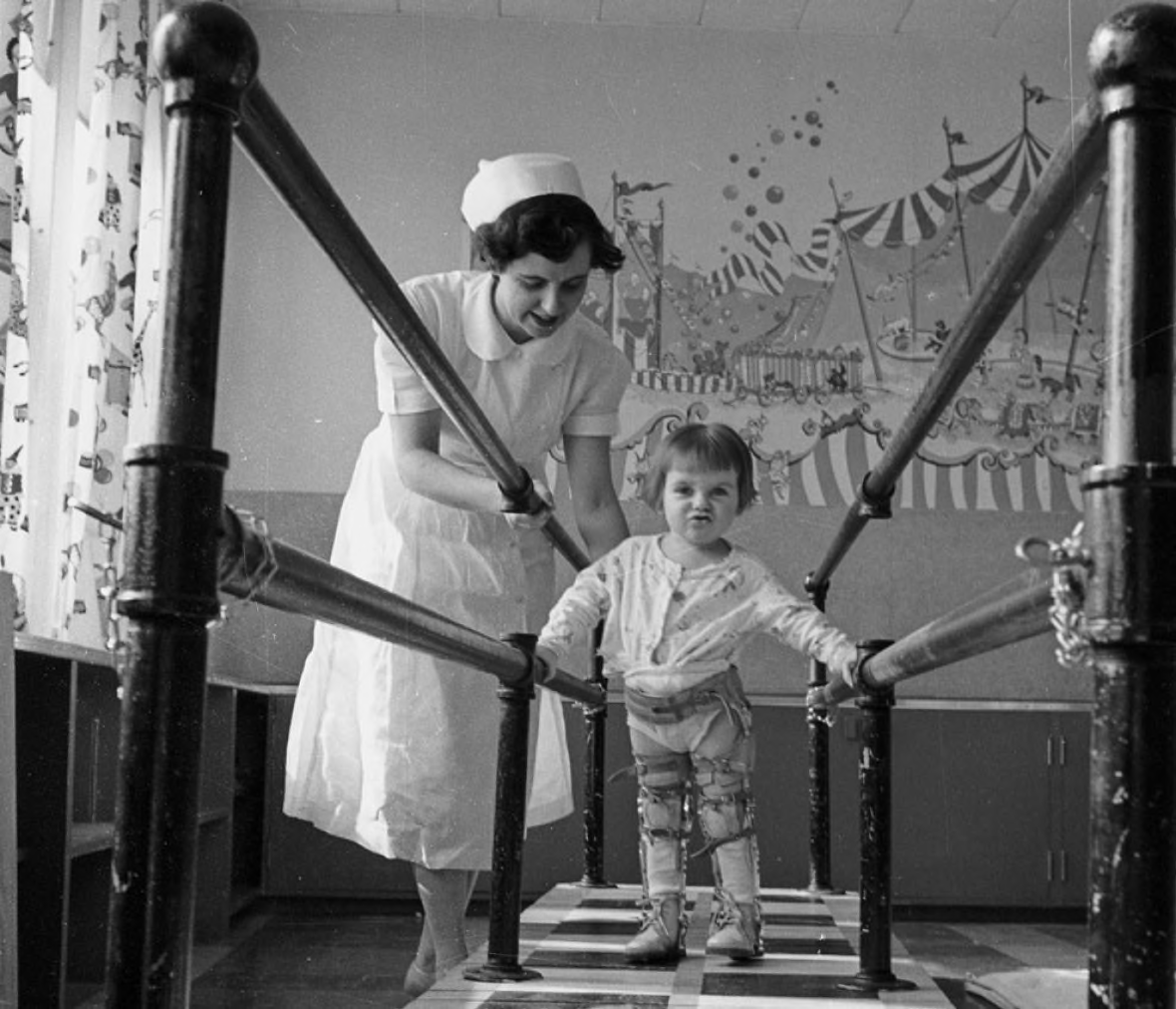 Polio causes paralysis is about one in 200 patients. Survivors like Gifford, shown here age 2 at the Sudbury General Hospital, often spent months or years in physical therapy. Chris Lund, National Film Board of Canada/Library and Archives Canada

Practically everyone, from public health officials to political pundits to social media commentators, has framed the threat of COVID-19 in terms of its mortality rate.

But COVID is going to injure many more people than it kills.

For every one person who dies of the disease, 14 people have health problems that last months after their initial infection, including chest pain, abdominal pain and shortness of breath. One in five patients hospitalized with COVID goes home with a new disability.

The loss of life over the past year and half has been staggering, but this pandemic is shaping up leave its greatest mark on survivors, making it much more similar to polio than, say, the Black Death.

Poliomyelitis, more commonly known by its abbreviation polio, has probably existed since ancient times, but it wasn’t responsible for any major epidemics until the 19th century. Canada’s first recorded case was in 1910, when a little girl was admitted to a hospital in Hamilton, Ont., with what appeared to be rabies.

It was only after she died that doctors diagnosed her illness as polio.

This stele from Egypt’s 18th Dynasty, showing a man with atrophied muscles in his right leg, suggests that polio has been around for at least 3,500 years. Deutsches Grünes Kreuz

Polio typically strikes children under the age of five, though it’s possible to be infected at any age. For children who grew up in the 1950s, when Canada had its most severe outbreaks, the disease was an annual visitor.

In our climate, polio peaked in the summer and early fall, when swimming, picnicking and other warm-weather activities created ideal conditions for the disease to spread.

Polio cast a long shadow over summertime. Parks, playgrounds and public pools would be closed during epidemics. Kids would stay home alone, playing in their backyards, avoiding each other.

The early symptoms of the disease are fatigue, fever, headache and vomiting, which can progress to muscle stiffness and, in a small number of cases, permanent paralysis.

The starkest image of polio is the tank ventilator, popularly known as the iron lung – a hulking metal tube that would look more at home navigating the bottom of the ocean than furnishing a hospital ward. The iron lung was a last resort in cases of respiratory polio, where the virus paralyzed the diaphragm, making it impossible for a patient to breathe on their own.

Ensconced in the machine from the neck down, with only their head protruding, the patient’s chest would be pulled open and pressed closed by the air pressure inside the tank, forcing them to breathe.

In a best-case scenario, the patient’s diaphragm would recover when the acute polio infection passed, and they could leave the ventilator. Some patients’ muscle tone, however, never improved, relegating them to iron lungs for decades. 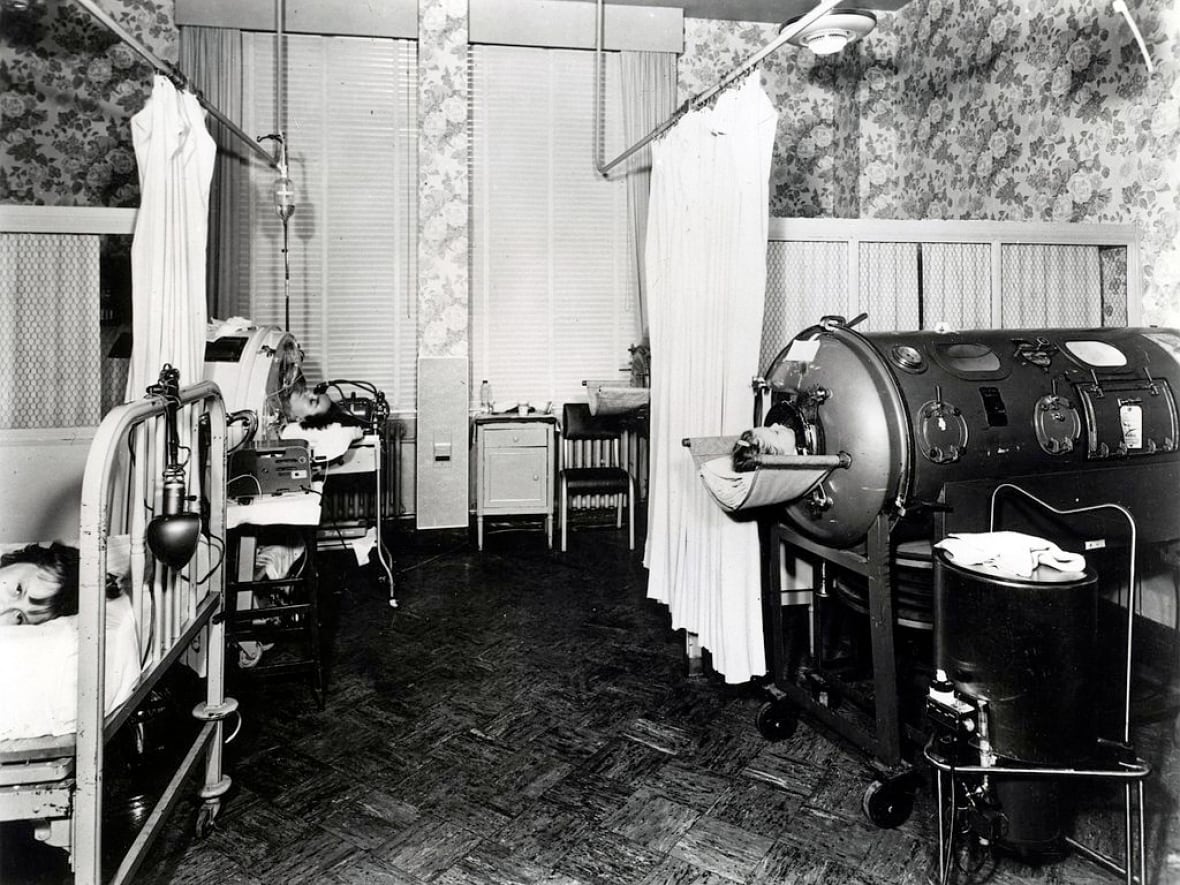 Polio wards were lined not only with beds but with iron lungs, large metal ventilators that helped patients to breathe during the worst of the infection. Some survivors never regained lung function and spent the rest of their lives in the devices. U.S. Food and Drug Administration

A handful of polio survivors still rely on the devices today.

Polio was considered such a devastating illness that Jonas Salk, developer of the polio vaccine, inoculated himself, his wife and his three children while his formula was still at the experimental stage, two years before it was approved for public use.

Unlike many other pandemic diseases, though, both polio and COVID-19 are disabling more often than they are fatal.

The mortality rate of polio is only around 0.05 per cent, or one in 2,000 cases. Seventy-two per cent of people who catch the poliovirus are asymptomatic, and 24 per cent experience a minor, flu-like illness that clears up in a week or two.

Only in about 0.5 per cent of cases, or one in 200 infections, does the disease lead to permanent paralysis. That figure may look small, but, as we’ve seen with COVID, when millions of people are catching a disease small percentages quickly add up to large numbers.

Approximately 11,000 Canadians – mostly children – were paralyzed by polio in the five years between 1949 and 1954 alone. When they recovered and were discharged from hospital, they returned to a society that was built to exclude them.

Public transportation didn’t accommodate wheelchairs. Disabled parking spaces hadn’t yet been invented. Doors were too narrow, sinks were too high and staircases were everywhere.

Worse still, people with physical disabilities were widely considered incompetent and were barred from many educational, employment and social opportunities.

As a result, thousands of young, healthy people who were ready to resume their lives found themselves stymied – not by their paralysis, but by the discrimination and inaccessibility of their communities.

The childhood polio survivors of the 1940s and 1950s grew up to be the disability rights advocates of the 1970s and 1980s. They were proponents of independent living and universal design.

They ensured that the Canadian Human Rights Act and the Charter of Rights and Freedoms included people with disabilities as a protected class, and they jump-started the long process of changing society’s perspectives on physical disability and mobility impairment. 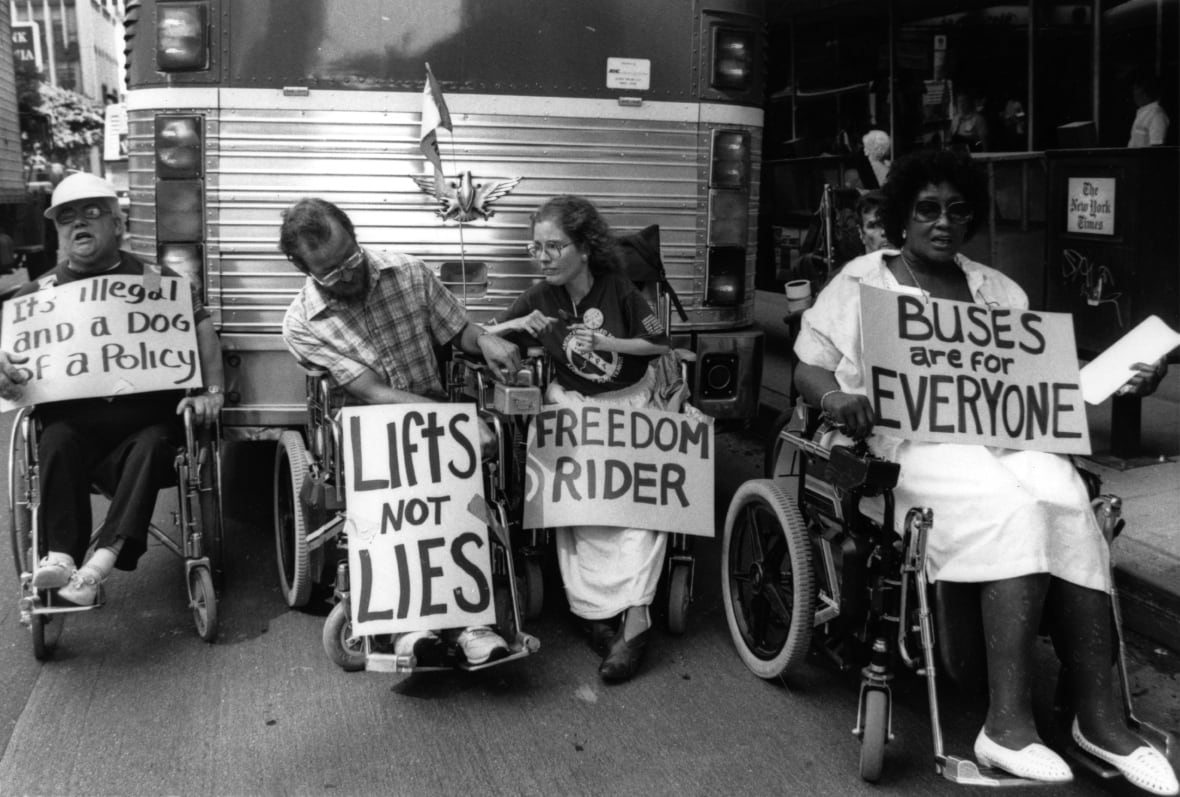 Our culture is still a long way from being fully inclusive of people with disabilities, and in the years to come COVID survivors may be among the new torch-bearers for disability rights. In fact, they may do for invisible disabilities what polio survivors did for physical disabilities.

Unlike the paralysis of polio, none of these things can be seen on the body, but they still have a major impact on daily life. They might affect someone’s ability to walk long distances, to work regular hours, or to manage their household.

Even before the COVID pandemic, our population was becoming more disabled as advancements in medicine allow people to live longer, healthier lives with a variety of conditions.

The COVID pandemic has cost us so much.

As we emerge from it, perhaps one advantage we can take away is a new appreciation for the prevalence of disability and a new commitment to making our society truly accessible.