‘A person with vision loss wouldn’t even attempt to go on a hike by themselves.’ 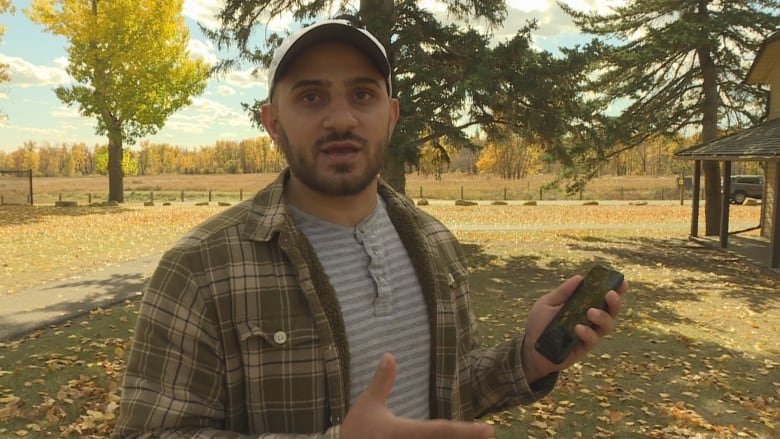 Ali Khalil, who is visually impaired, is the technology program lead with the Canadian National Institute for the Blind. He has been using the BlindSpace app, along with his white cane, to hike in Fish Creek Park. Dave Gilson CBC

An app called BlindSquare that helps visually impaired people navigate their surroundings is now available for some trails in Fish Creek Park in Calgary.

For Ali Khalil, who is visually impaired and has been using the navigation app along with his white cane, being able to go for a hike alone is a new level of independence.

“It’s giving a person with vision loss back their independence to navigate their surroundings without relying on another individual to guide them,” said Khalil, the technology program lead with the Canadian National Institute for the Blind.

“Just for my safety, I love it,” he said. “To be able to, as a person, to not just rely on my cane skills and my other senses, but to also have my smartphone on me and feeding me this information to make sure that I’m staying safe while I’m walking this pathway as a hiker.”

BlindSquare is a 3D, audible GPS app that feeds information to the user about their surroundings. It uses auditory cues to guide people along a route, and alert them to things like trail surface changes, crossings, bridges, benches, buildings and trail features.

“It will tell me if there is a bench fairly close to me, a store, a landmark, things like that,” Khalil said.

The user points the phone, shakes it and waits for the information about what’s up ahead.

“A person with vision loss wouldn’t even attempt to go on a hike by themselves without a guide,” Khalil said. “You’re essentially creating an accessible world for people with disability to be able to enjoy the outdoors, to make me feel safe to walk Fish Creek Park by myself… So I think it’s very, very revolutionary.”

The province says park visitors can now use the app to help them navigate Stream Changes Trail and the visitor centre.

“When I’m close enough to the trees and to the sound of the stream, it brings me peace,” Khallil said.

BlindSquare is an international accessibility app that is fairly new to Alberta, but it is expanding here. The app can be used in places that are mapped out through the use of beacons, GPS and even QR codes.

Khalil says the app has helped him to feel safer wherever he has used it.

“Before BlindSquare, I would rely on my hearing to see if traffic was coming, and my cane skills,” he said. “Now, with BlindSquare, I get informed that this is an intersection, and there’s a lot of cars driving back and forth, and just to be careful.”

BlindSquare can also allow people to mark out a destination, such as a restaurant, and then guide them to it on foot.