The shoe-fitting fluoroscope was unnecessary and hazardous, but kids loved it. 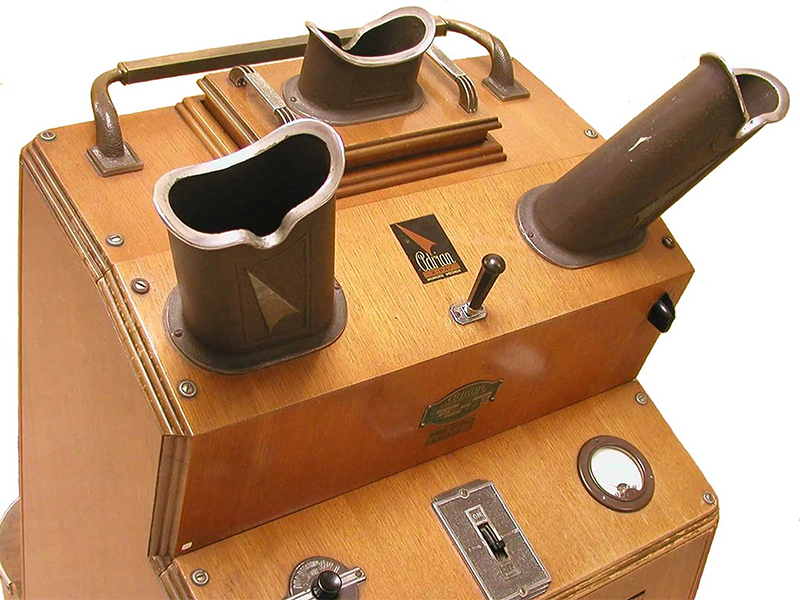 How do those shoes fit? Too tight in the toes? Too wide in the heel? Step right up to the Foot-O-Scope to eliminate the guesswork and take a scientific approach to proper shoe fitting!

When the German engineer and physicist Wilhelm Röntgen accidentally discovered a mysterious light that would pass through most substances and leave behind a ghostly image of an object’s interior, I doubt he had shoes in mind. Indeed, he didn’t even know what the light was, so he called it “X-rays,” the “X” standing for the unknown. That name stuck for English speakers, although in many languages they’re known as Röntgen rays. 8 November marks the 125th anniversary of his discovery.

Röntgen published his findings on 28 December 1895, and within a month, “On a New Kind of Rays” had been translated into English and published in Nature. Three weeks after that, Science reprinted it. Word also spread quickly in the popular press about this wondrous light that allowed you to see inside the human body. Similar to Marie and Pierre Curie, Röntgen refused to take out any patents so that humanity could benefit from this new method for querying nature. Scientists, engineers, and medical doctors dove into X-ray research headlong. 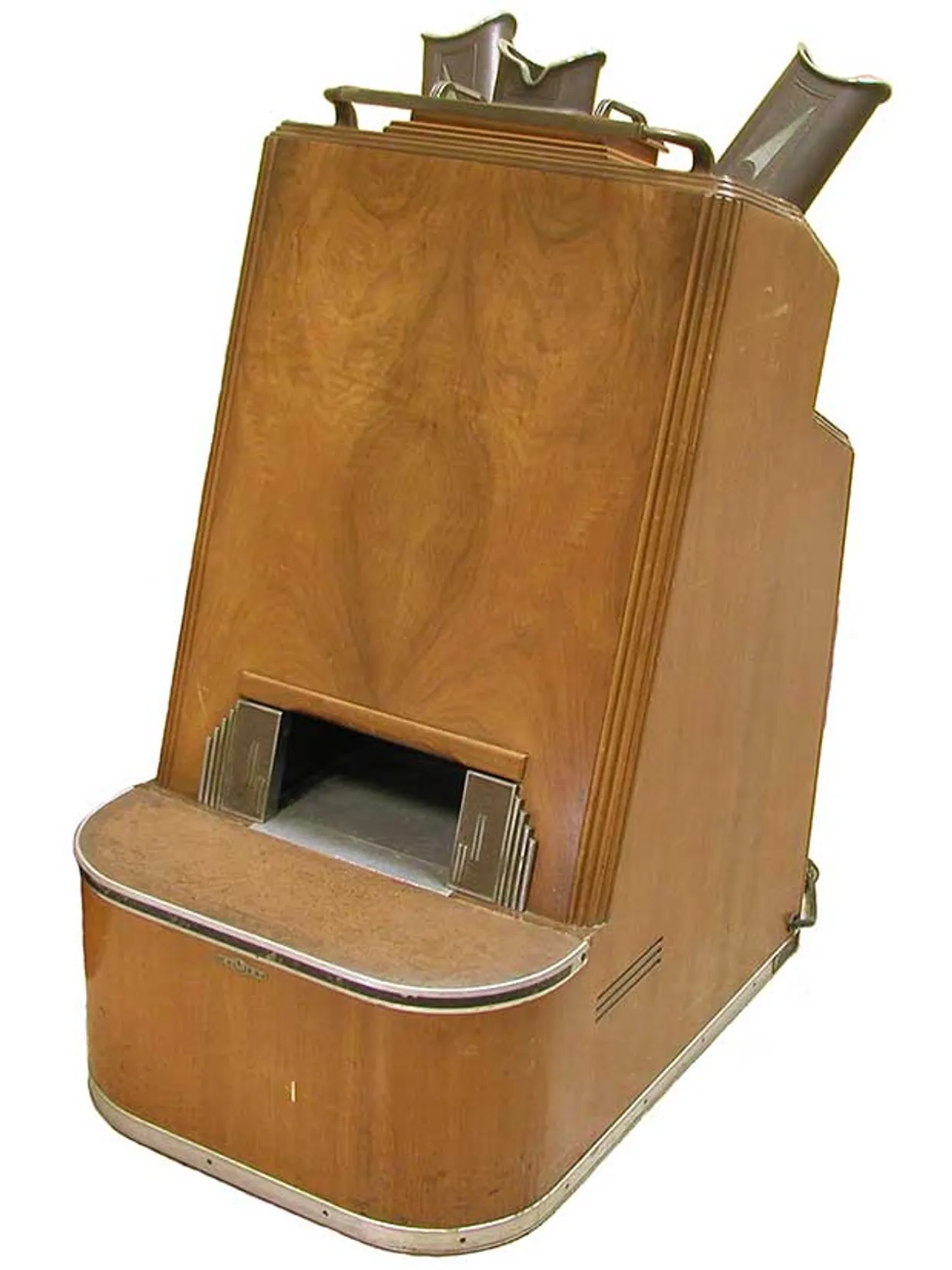 Experimenters quickly realized that X-rays could produce still images, called radiographs, as well as moving images. The object of interest was placed between an X-ray beam and a fluorescent screen. Röntgen had been experimenting with cathode rays and Crookes tubes when he first saw the glow on a screen coated with barium platinocyanide. It took a few weeks of experimenting to capture clear images on a photographic plate. His first X-ray image was of his wife’s hand, distinctly showing the bones and a ring.

Viewing a moving image was simpler: You just looked directly at the fluorescent screen. Thomas Edison, an early X-ray enthusiast, coined the term fluoroscopy for this new technique, which was developed simultaneously in February 1896 in Italy and the United States. 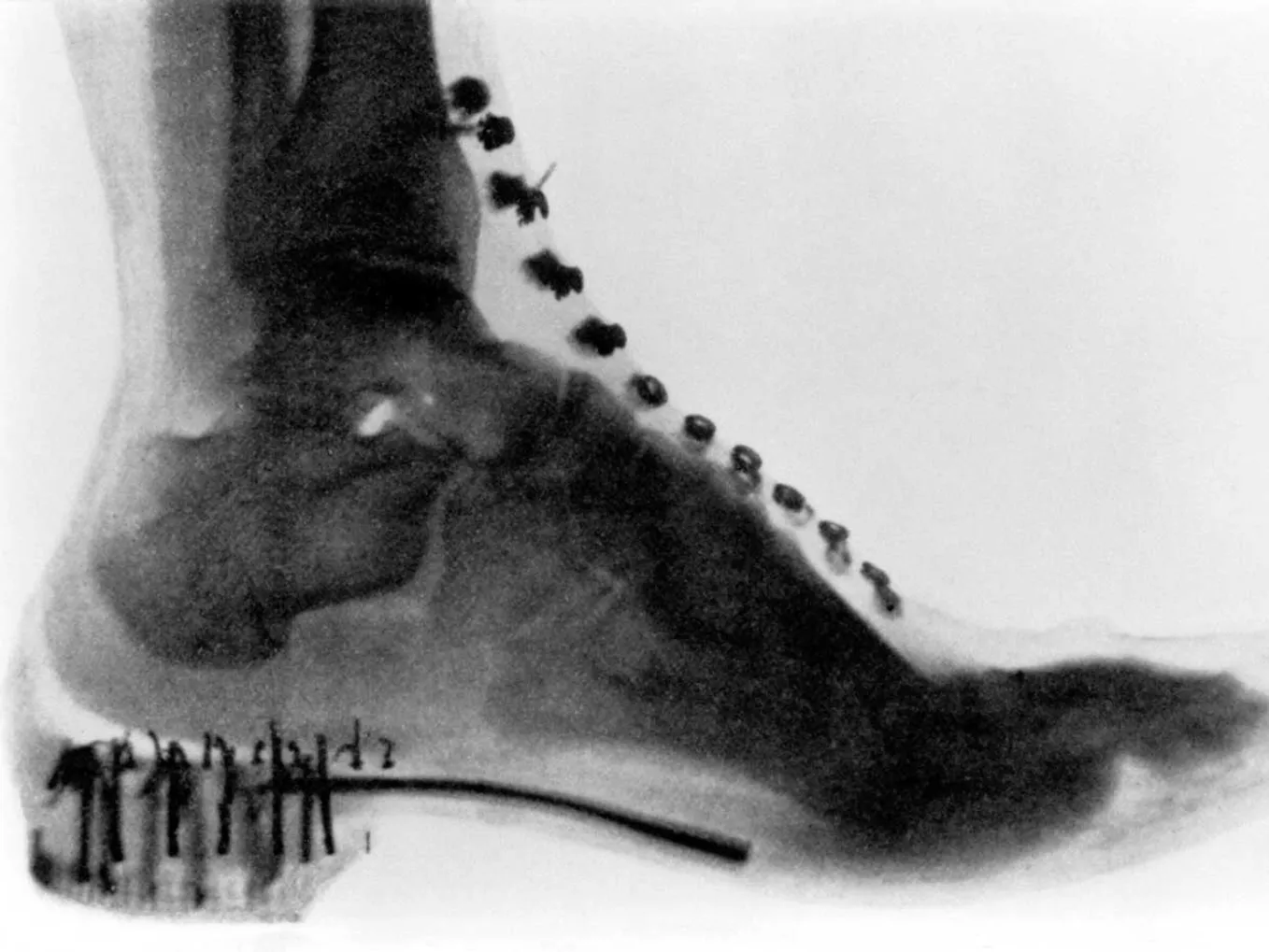 Less than a year after Röntgen’s discovery, William Morton, a medical doctor, and Edwin W. Hammer, an electrical engineer, rushed to publish The X-Ray; or Photography of the Invisible and Its Value in Surgery, which described the necessary apparatus and techniques to produce radiographs. Among the book’s numerous illustrations was a radiograph of a woman’s foot inside a boot. Morton and Hammer’s textbook became popular among surgeons, doctors, and dentists eager to apply this new technology.

A push from the military during World War I helped establish the fluoroscope for shoe fitting. In his highly regarded 1914 publication A Textbook of Military Hygiene and Sanitation, for instance, Frank Keefer included radiographs of feet in boots to highlight proper and ill-fitting footwear. But Keefer stopped short of recommending that every soldier’s foot be imaged to check for fit, as Jacalyn Duffin and Charles R. R. Hayter (both historians and medical doctors) detail in their article Baring the Sole: The Rise and Fall of the Shoe-Fitting Fluoroscope (Isis, June 2000).

Jacob J. Lowe, a doctor in Boston, used fluoroscopy to examine the feet of wounded soldiers without removing their boots. When the war ended, Lowe adapted the technology for shoe shops, and he filed for a U.S. patent in 1919, although it wasn’t granted until 1927. He named his device the Foot-O-Scope. Across the Atlantic, inventors in England applied for a British patent in 1924, which was awarded in 1926. Meanwhile, Matthew B. Adrian, inventor of the shoe fitter shown at top, filed a patent claim in 1921, and it was granted in 1927.

Before long, two companies emerged as the leading producers of shoe-fitting fluoroscopes: the Pedoscope Co. in England and X-Ray Shoe Fitter Inc. in the United States. The basic design included a large wooden cabinet with an X-ray tube in its base and a slot where customers would place their shoe-clad feet. When the sales clerk flipped the switch to activate the X-ray stream, the customer could view the image on a fluorescent screen, showing the bones of the feet and the outline of the shoes. The devices usually had three eyepieces so that the clerk, customer, and a third curious onlooker (parent, spouse, sibling) could all view the image simultaneously.

The machines were heralded as providing a more “scientific” method of fitting shoes. Duffin and Hayter argue, however, that shoe-fitting fluoroscopy was first and foremost an elaborate marketing scheme to sell shoes. If so, it definitely worked. My mother fondly remembers her childhood trips to Wenton’s on Bergen Avenue in Jersey City to buy saddle shoes. Not only did she get to view her feet with the fancy technology, but she was given a shoe horn, balloon, and lollipop. Retailers banked on children begging their parents for new shoes.

Although the fluoroscope appeared to bring scientific rigor to the shoe-fitting process, there was nothing medically necessary about it. My mother grudgingly acknowledges that the fluoroscope didn’t help her bunions in the least. Worse, the unregulated radiation exposure put countless customers and clerks at risk for ailments including dermatitis, cataracts, and, with prolonged exposure, cancer.

The amount of radiation exposure depended on several things, including the person’s proximity to the machine, the amount of protective shielding, and the exposure time. A typical fitting lasted 20 seconds, and of course some customers would have several fittings before settling on just the right pair. The first machines were unregulated. In fact, the roentgen (R) didn’t become the internationally accepted unit of radiation until 1928, and the first systematic survey of the machines wasn’t undertaken until 20 years later. That 1948 study of 43 machines in Detroit showed ranges from 16 to 75 roentgens per minute. In 1946, the American Standards Association had issued a safety code for industrial use of X-rays, limiting exposure to 0.1 R per day. 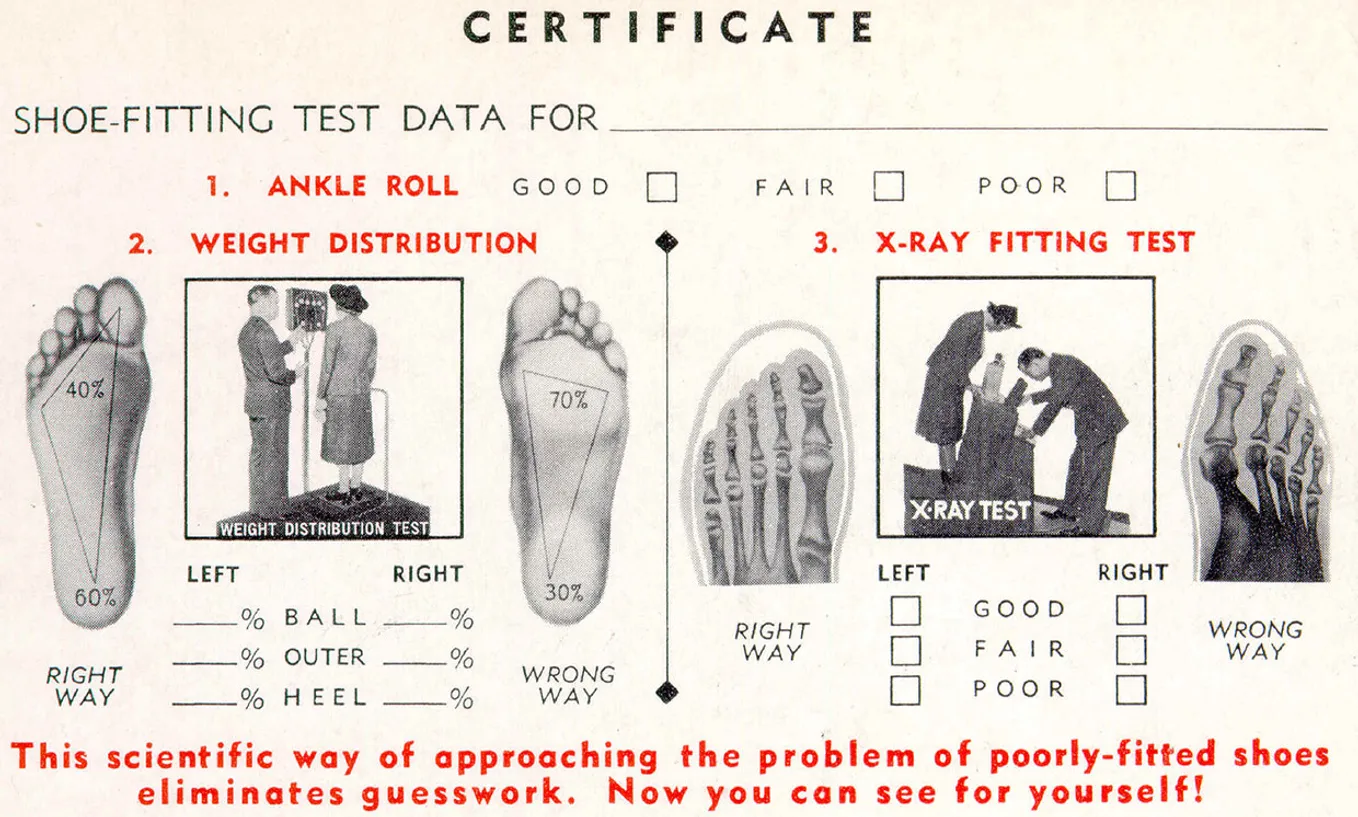 But some experts had warned about the dangers of X-rays early on. Edison was one. He was already an established inventor when Röntgen made his discovery, and for several years, Edison’s lab worked nonstop on X-ray experiments. That work came to a halt with the decline and eventual death of Clarence M. Dally.

Dally, a technician in Edison’s lab, ran numerous tests with the fluoroscope, regularly exposing himself to radiation for hours on end. By 1900 he had developed lesions on his hands. His hair began to fall out, and his face grew wrinkled. In 1902, his left arm had to be amputated, and the following year his right arm. He died in 1904 at the age of 39 from metastatic skin cancer. The New York Times called him “a martyr to science.” Edison famously stated, “Don’t talk to me about X-rays. I am afraid of them.”

Clarence Dally may have been the first American to die of radiation sickness, but by 1908 the American Roentgen Ray Society reported 47 fatalities due to radiation. In 1915 the Roentgen Society of Great Britain issued guidelines to protect workers from overexposure to radiation. These were incorporated into recommendations made in 1921 by the British X-Ray and Radium Protection Committee, a group with a similar mission. Comparable guidelines were established in the United States in 1922.

For those concerned about radiation exposure, the shoe-fitting fluoroscope seemed a dangerous machine. Christina Jordan was the wife of Alfred Jordan, a pioneer in radiographic disease detection, and in 1925, she wrote a letter to The Times of London decrying the dangerous levels of X-ray radiation to which store clerks were being exposed. Jordan noted that while a scientist who dies of radiation sickness is celebrated as “a martyr to science,” a “‘martyr to commerce’ stands on a different footing.”

Charles H. Baber, a merchant on Regent Street who claimed to be the first shoe retailer to use X-rays replied with a letter the next day. Having used the machine since 1921, he wrote, he saw no harm to himself or his employees. The Times also ran a letter from J. Edward Seager of X-Rays Limited (as the Pedoscope’s manufacturer was then called), noting that the machine had been tested and certified by the National Physical Laboratory. This fact, he wrote, “should be conclusive evidence that there is no danger whatever to either assistants or users of the pedoscope.”

And that, seemingly, was that. The shoe-fitting fluoroscope flourished in the retail landscape with virtually no oversight. By the early 1950s, an estimated 10,000 machines were operating in the United States, 3,000 in the United Kingdom, and 1,000 in Canada.

After World War II and the dropping of the atomic bombs, though, Americans began to pull back from their love of all things irradiating. The shoe-fitting fluoroscope did not escape notice. As mentioned, the American Standards Association issued guidance on the technology in 1946, and reports published in the Journal of the American Medical Association and the New England Journal of Medicine also raised the alarm. States began passing legislation that the machines could be operated only by licensed physicians, and in 1957, Pennsylvania banned them entirely. But as late as 1970, 17 states still allowed them. Eventually, a few specimens made their way into museum collections; the one at top is from the Health Physics Historical Instrumentation Museum Collection at the Oak Ridge Associated Universities.

This video by the U.S. Food and Drug Administration nicely captures how regulators finally caught up with the machine:

The shoe-fitting fluoroscope is a curious technology. It seemed scientific but it wasn’t. Its makers claimed it wasn’t dangerous, but it was. In the end, it proved utterly superfluous—a competent salesperson could fit a shoe just as easily and with less fuss. And yet I understand the allure. I’ve been scanned for insoles to help my overpronated feet. I’ve been videotaped on a treadmill to help me select running shoes. Was that science? Did it help? I can only hope. I’m pretty sure at least that it did no harm.