On a cold, still morning, camped on a lake, with dawn weak in the sky and autumn bittersweet in the air, I woke to the message that Nathan was gone. I was shocked. Nathan Dexter took me on my first skydive. That day had been electric, one of the most exciting of my life. Nathan was electric. How could he possibly be dead? 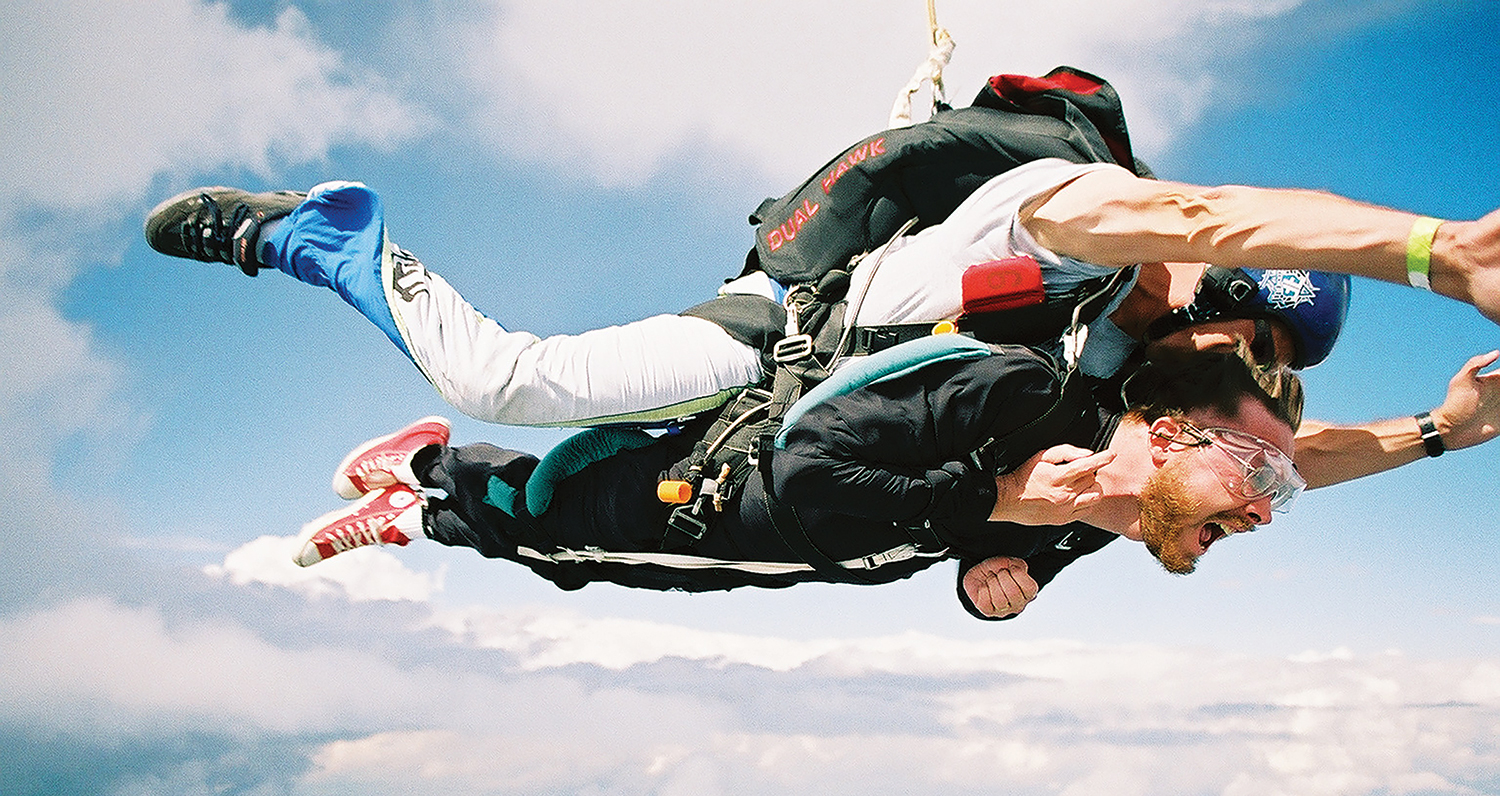 Nathan and I jumped together for Skydiving for MS. For 19 years people with MS and their allies took to the air over Chicagoland Skydiving Center in Rochelle, Illinois. What started as an annual benefit for the late Ken Adams, expanded into one of CSC’s signature events, raising over $250,000 for the National Multiple Sclerosis Society [in the US]. I touted it as “The Most Exciting Fundraiser in the World,” and the epic raffles and after-parties definitely were. In addition to fundraising, the event succeeded in its mission of getting disabled jumpers in the air, growing from one or two to dozens. I was one of the many who got hooked — over the years I jumped 11 times.

I loved skydiving, but more than that I loved skydiving with Nathan, the instructor for my first four jumps. Of the many lifelong friends I made at CSC, I most looked forward to seeing him. I’d roll out of the minivan with butterflies. The plane revving on the airstrip… the scheduling orders crackling over the PA … the outfitted skydivers rushing to and fro… all on the move. But none of it was real, not until I’d heard Nathan’s jolly, swaggering pirate’s laugh. Like him, it was larger than life and full of gusto. The adventure had begun.

“My most potent memory of Nathan is that raspy laugh that would just carry through the hangar,” says Becky Johns, former events and marketing director at CSC and a student of Nathan’s. News of his death by heart attack in 2020 “sent a wave of shock through the community.” He was 48.

“He was a big personality,” says CSC owner Doug Smith, a close friend and competition teammate of Nathan’s. “You know, he could sometimes be abrasive to people because he’s so loud. But you spend five minutes with that guy and you realize that it’s purely his passion for the sport, for sharing fun experiences with people, that was driving everything.”

Once a year, he poured all that energy into opening the skies to me. For someone like me who spent his days in a room pecking a keyboard, this was mind-blowing stuff. He exemplified an industry of instructors, facilities owners and equipment makers willing and able to adapt safe access for people of all abilities.

Skydiving for MS was a big day, and I needed a big instructor. Nathan was strong enough to do everything with a 6-feet-2-inches-tall quad strapped to him. After 19,500 jumps he had more than enough expertise to introduce scores of paraplegics and quadriplegics to skydiving. Every year he and the folks at CSC brought some new improvement to our set-up. It was incredibly welcoming.

He’d drip sweat as he suited me up in the summer humidity, weaving a cord through my jump harness and pulling tight. A half-hour later I’d come rolling out of the hangar trussed like a pot roast to keep my arms from whipping in freefall. From the tarmac they hoisted me up to the floor of the plane. I was a lot of work, and year after year he was there for all of it. 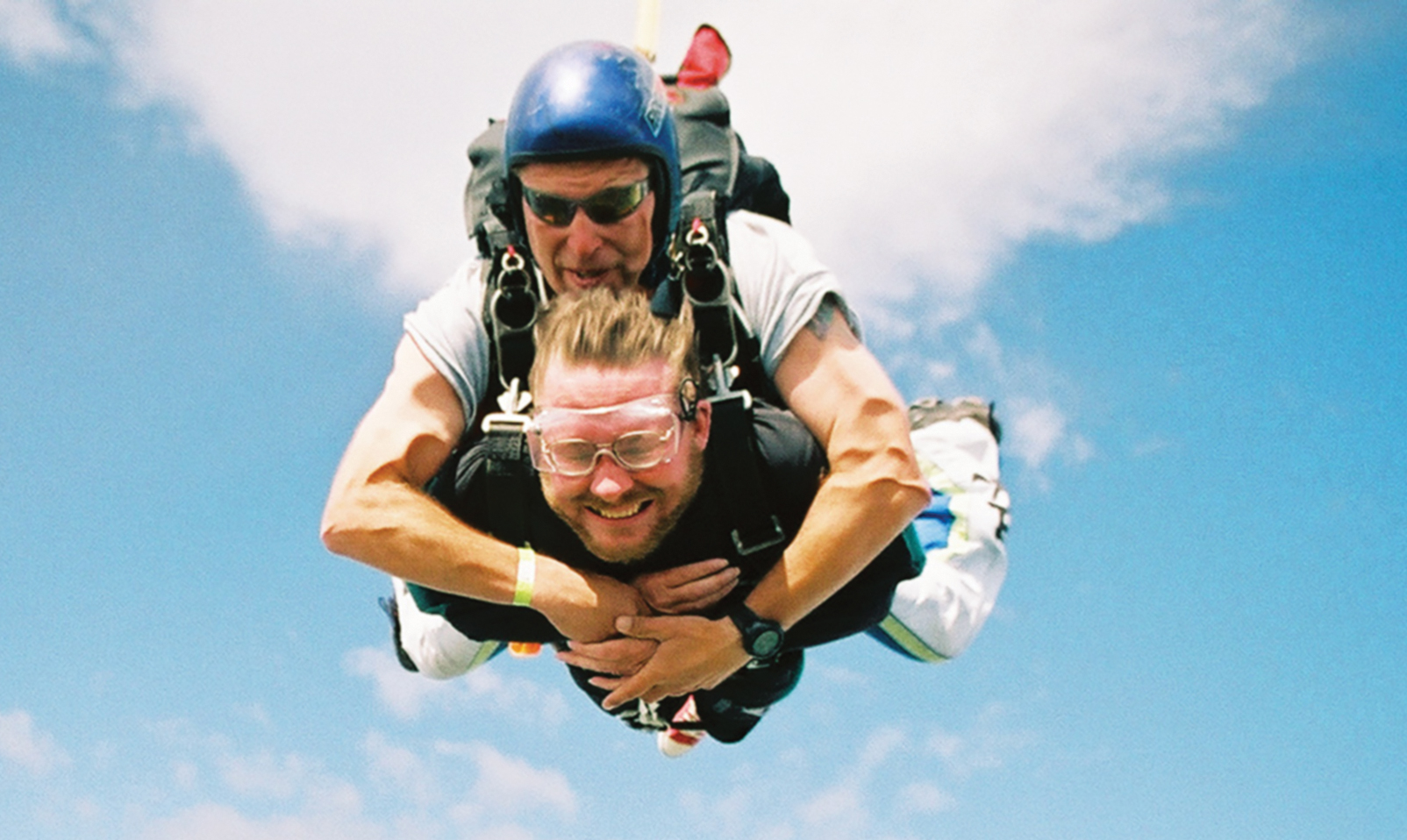 Climbing to 14,000 feet takes a noisy 15 minutes in the prop plane. On my first jump, the air was filled with adrenaline, anticipation and war-whoops from a couple dozen jumpers inside. All along, Nathan checked and rechecked the harness, yanking straps tighter and tighter as there could be no space between us. From the jump seat I got a bird’s-eye view of the world falling away through the clear Plexiglas door.

Finally, the door jerked open, rolling overhead like a garage door. Cold air and prop-noise rushed inside. A half-dozen formation jumpers slapped hands and lined up inches away in the open doorway, and in the blink of an eye, vanished outside. That was our cue. With grab bars, Nathan pulled himself to his feet and trudged us to the threshold like some two-headed, eight-limbed science experiment. Looking down on the earth 2.5 miles below — where the highway looked like slot racing and the farmland an endless quilt of green and gold squares — here was where I thought I’d feel fear. But there was no time for that. He pulled us through the cargo door and we were gone.

The first several seconds we tumbled in a kaleidoscope of blue sky, white clouds, the airplane, the earth, sky, clouds, airplane, earth, blueness. Surprisingly, I didn’t feel dizzy. Nausea is rare, Nathan told me, adding that in all his jumps he’d seen only one person get sick. My mind was busy processing the swirl of images.

It is rapid flight. In one minute of freefall, you drop 10,000 feet through tornado-level 120 mph winds. The photographer flying alongside with his helmet-mounted camera was an excellent reminder that I was there to enjoy myself and not get all serious – besides, if I didn’t smile pretty for the camera, my skin would’ve been looser, and my cheeks would’ve flopped all goofy in the wind. Then, Nathan changed the game by pulling the chute.

Under the canopy of the parachute the world turned serene. Moments earlier, my ears boomed like a volcano, but now it was quiet enough to have a conversation. “You just completed your first freefall, my man,” he said. We turned this way and that, as he pointed out landmarks. It was the first time in years I’d moved around without being tied to a piece of machinery. In the field below I spotted a golf cart with people beside it, and in that cluster was a black dot I realized was my wheelchair. I called Nathan’s attention to it. “Keep me out of it as long as possible,” I said. I mean, I love my wheelchair and all, but we’re cool about seeing other devices like airplanes and canopy rigs.

Nathan began shifting me higher in the harness, so that his feet were positioned below mine. It was ingeniously simple: his feet would simply reach the ground first. The ground got closer and closer. The grass rushed by. People ran to intercept us. Here we go, I thought, gritting my teeth.

After five years, a bad back would force him to hand me over to another instructor with 25,000 jumps of his own and experience taking up people with disabilities.

John Beer and instructors Nathan Dexter and Jacko Jackson are fired up after another successful jump.

July 3, 2021 was a perfect summer’s day in Rochelle. Over the course of the day about 100 people gathered at CSC, some from the area or Chicago, others from as distant as Minneapolis, Texas and Arizona. They included family members of Nathan’s and those he had trained, tandemed and jumped with over the years, including some from Skydiving for MS. It was the third and final tribute, after similar events in California and Arizona, other skydiving communities where Nathan left his mark.

“So many people came and said I wouldn’t be skydiving today if it weren’t for Nathan Dexter … people came out of the woodwork that I had not seen in 10 or 15 years,” says Smith. “It was a great vibe.”

At sunset a plane took off for the day’s final flight, carrying many of his closest friends from CSC, including Smith and Johns. The climax was an “ash dive,” when Lisa Dexter, Nathan’s wife, released a portion of Nathan’s ashes while freefalling in tandem with former CSC co-owner Todd Davis. There were ash dives over California and Arizona as well.

“An ash dive is such an important tradition to skydivers,” says Johns. “It’s to signify you’re retiring to the sky, right, like you’re one with the sky forever.” She says the tribute “couldn’t have gone any better … lots of tears, lots of laughs.”

Back when we jumped together, Nathan had also produced the souvenir DVDs that document customers’ jumps. For mine, he used an aggressive rocker as the soundtrack, “Alive” by POD. I wouldn’t think it was possible, but I get more amped watching it now than when I first saw it on that electric day so many years ago. The chorus couldn’t be a more fitting tribute.