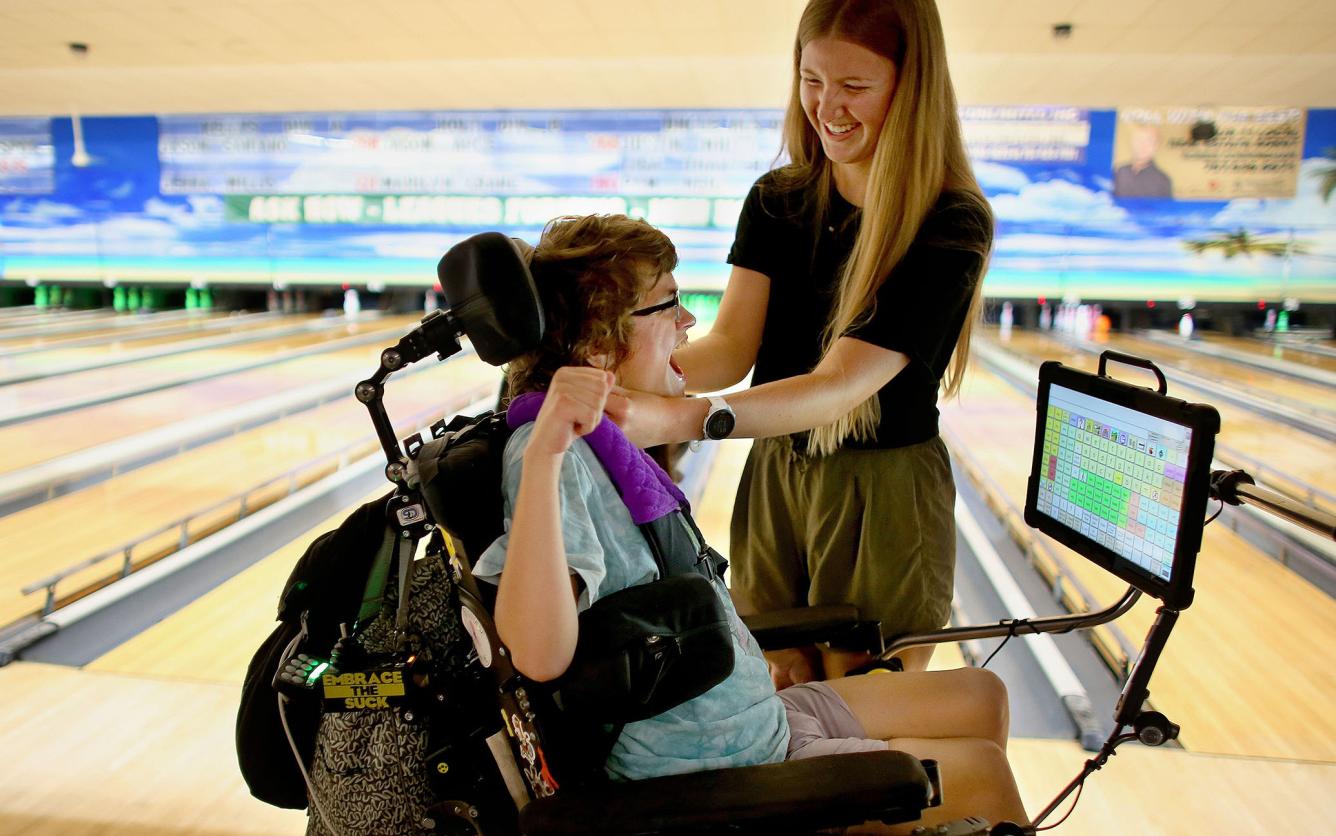 Julia Prendergast adjusts Tyme Fiedorczyk’s collar as she celebrates a strong frame during a field trip with the Ability Center to go bowling at Pinboy’s in Virginia Beach, Va. in July. Stephen M. Katz, The Virginian-Pilot/TNS

VIRGINIA BEACH — At the bowling alley, Julia Prendergast carefully worked the joystick on her friend’s wheelchair, positioning her perpendicular to the lane.

She brushed a wisp of hair off Tyme Fiedorczyk’s face and adjusted her glasses. Tyme has cerebral palsy, which impairs her muscle coordination; to talk, she must type into an electronic device; to move freely, she must have support.

The bowling ball sat atop a ramp to her left, and she swiped at it. After several attempts, she hit it, sending it spiraling down the lane.

As the ball rolled, her fan club — friends from her adult day camp, gathered at Pinboy’s — started cheering behind her:

As the ball spun closer to the pins, her friends waved their arms, yelling at the ball to move right.

Julia smiled and leaned over her friend’s chair.

“Three pins left. You got it.”

She lined Tyme up again to finish the frame and took a step back to watch, wait and cheer. 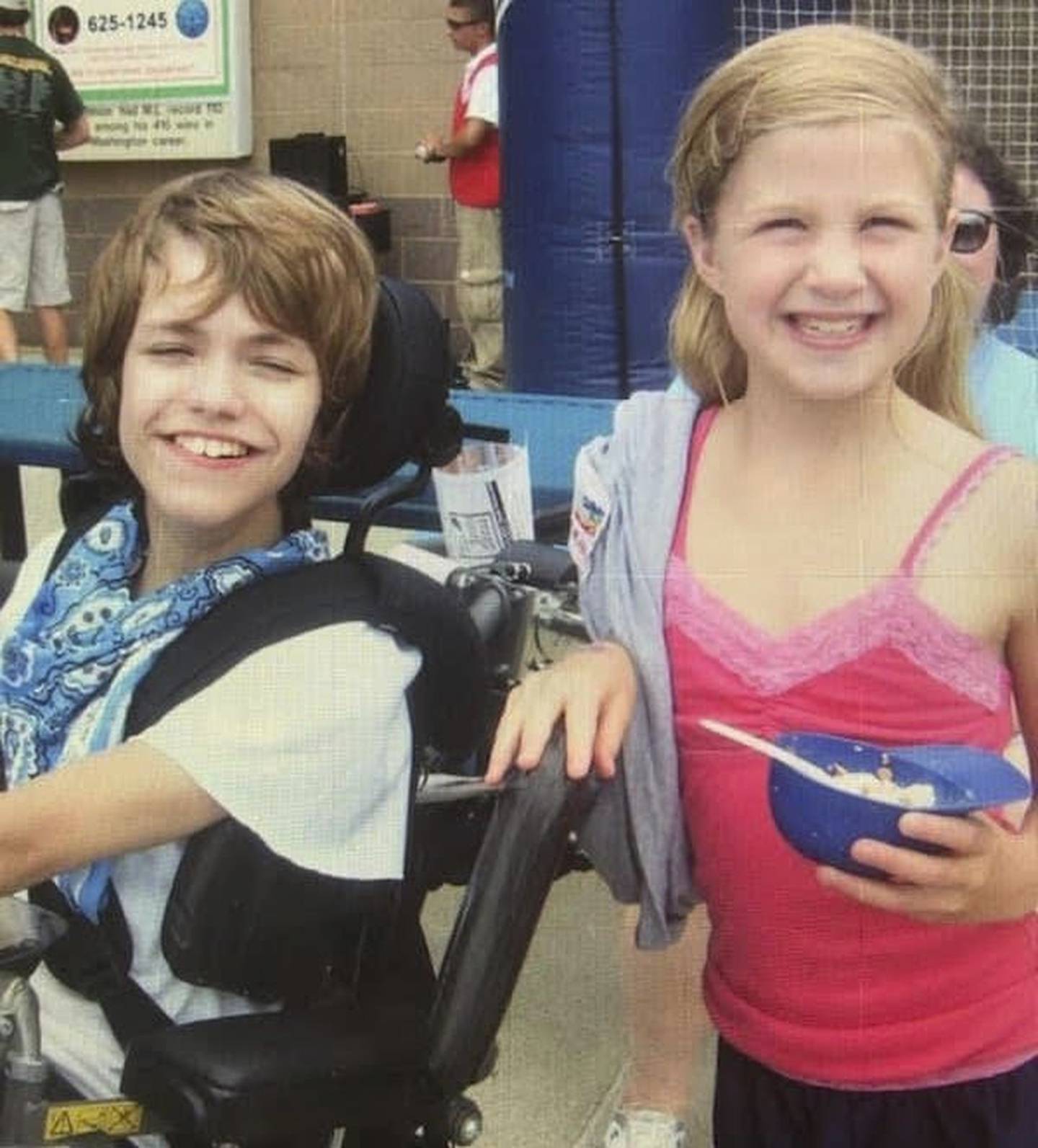 Tyme Fiedorczyk and Julia Prendergast in 2010, a few years after they first met. Julia’s mother had sensed the girls would hit it off; she’s executive director of what’s now the Ability Center of Virginia (Courtesy)

A look. A touch. A coy smile. An inside joke.

That is all Julia, 21, and Tyme, 25, need to express their thoughts to each other.

Julia has been Tyme’s caregiver for the past year. But they have been friends for 15.

They met at the Ability Center of Virginia (formerly Cerebral Palsy of Virginia), a nonprofit aimed at helping people with different abilities lead happy and productive lives.

Julia was 6 when she first volunteered as a peer buddy. Tyme was 10 and attending her first summer camp.

Julia’s mother, Michelle, is the executive director of the Virginia Beach-based program and had a feeling that her daughter would hit it off with Tyme. They did.

Julia invited Tyme to her birthday parties, to movie nights, to go shopping.

Tyme invited Julia to watch her surf with Life Rolls On and cheer her on at the Virginia Miss Amazing pageants. Julia even placed the crown on Tyme when she won the National Miss Amazing 2020 Junior Miss Pageant in Nashville, Tenn.

They both graduated from high school in 2019 — Julia from Kellam in Virginia Beach and Tyme from Indian River in Chesapeake — and shortly after, their relationship took on new meaning.

Tyme’s mother, Kim, asked Julia if she would be Tyme’s caregiver. Without a question, Julia accepted.

The arrangement started out at two days a week and progressed to full-time last summer.

“I decided I would be with her every day,” Julia said, during an interview at Tyme’s home in Chesapeake. “And I told her to get used to it.”

Tyme, sitting beside her, erupted with sounds of glee.

At 10 a.m. five days a week, Julia arrives at Tyme’s home to help her dress, connect her communication device to her wheelchair, and “make sure Miss Vain looks presentable.”

“When I tell people what I do, I say caregiving as the short answer because not everyone gets it,” Julia said. “It’s easier to say I’m going to my best friend Tyme’s house.”

Julia feeds her. She drives her to the adult day program at the center and to physical therapy.

“To have someone in our home, someone we trusted and someone who knew Tyme and was comfortable with her was comforting,” Kim Fiedorczyk said. “At some point, I can’t remember when, I handed her the keys to the van and said, You guys go.” 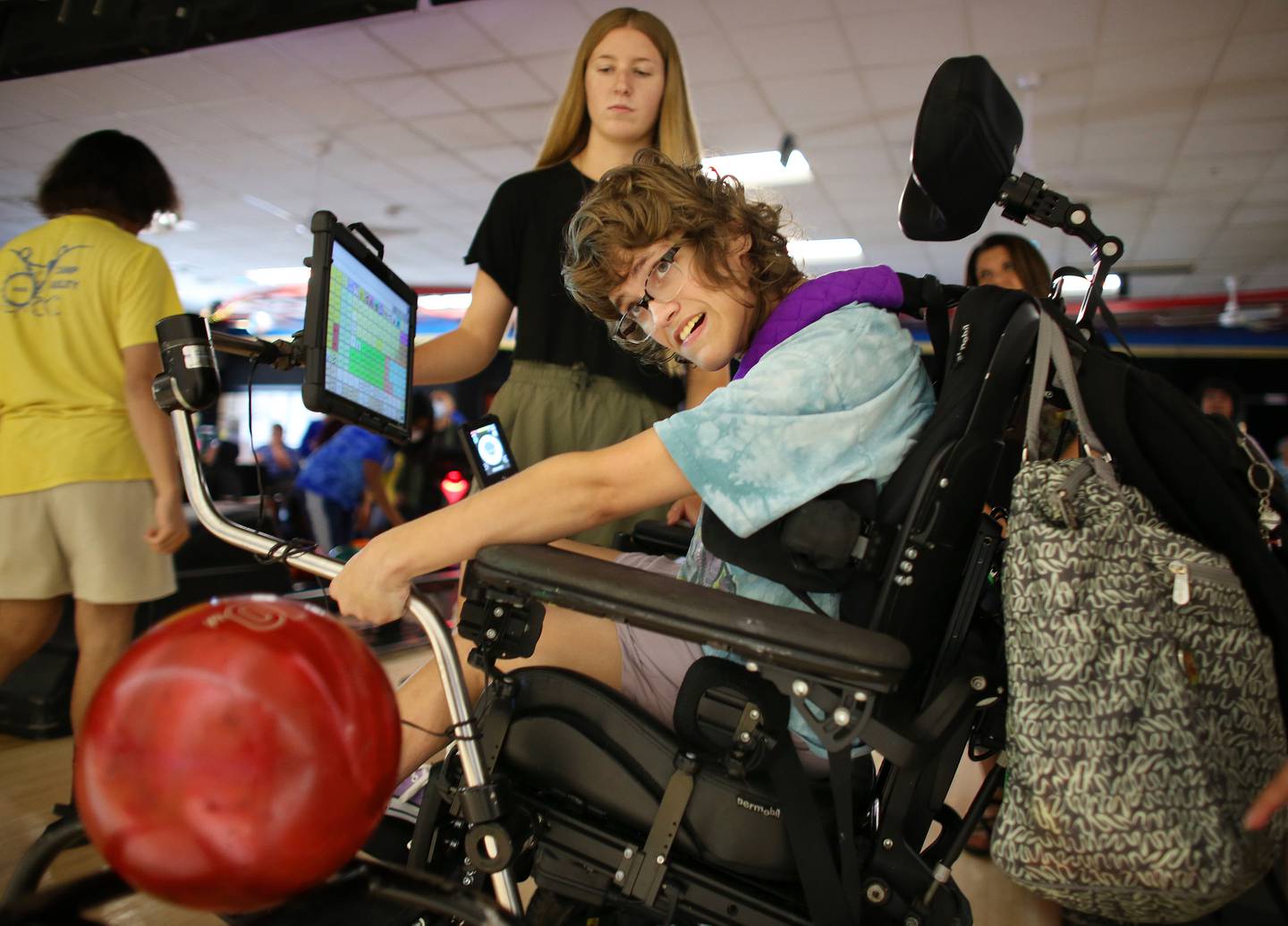 Tyme lines up a shot. (Aside from bowling, she swims, loves indoor skydiving, and has gone hang gliding and downhill snow skiing. Julia runs; sometimes Tyme joins her. Stephen M. Katz, The Virginian-Pilot/TNS

Kim and Eric Fiedorczyk always made sure their daughter tried new experiences — many of them centered on water, where she can move more freely.

She’s gone water skiing and tubing. She’s surfed in Puerto Rico and was scheduled to go to Hawaii before the pandemic hit.

She enjoys swimming in the family’s backyard pool, a gift 10 years ago through a nonprofit, Backyard Havens.

She loves indoor skydiving at iFly in Virginia Beach and has gone tandem hang gliding and downhill snow skiing using a bi-ski.

Julia is a keen runner and normally prefers running solo, but started signing up for the Ability Center’s 5K races with Tyme, who sat in a loaner push race chair.

They ran the Surf-n-Santa 5-miler in 2019 and signed up for the Shamrock Half Marathon in March 2020 only to see it canceled because of the pandemic.

When races started back up, the duo were quick to sign up. The Wicked 10K in October 2021 was next, followed by the Norfolk Harbor Half Marathon in November.

They stopped with a half-mile left. Julia helped Tyme climb into a gait trainer so that she could walk the last half-mile. Tyme had worked hard to cross the finish line walking.

“That was a really cool moment.”

As Julia recalled the race, Tyme gently tapped a button with her knee on her tablet to describe what walking felt like.

Weekly training with a physical therapist at Old Dominion University helps her increase her strength.

The hope is that she will one day do 1-mile runs in her gait trainer.

In March, the friends set off to Orlando, Fla., for runDisney, which features a 5K, 10K and 10-mile theme park race.

Julia has to pace herself as she pushes the 30-pound chair plus Tyme’s 105-pound frame.

“It’s hard, but easy,” she said. “It’s nice to have something to hold onto because self-doubt can really kick your ass, but you’re moving, so it’s moving with you.”

Julia and Tyme plan to travel for other races, including the DC Half Marathon in September. They also plan to start a fundraiser for a new foldable running chair.

All the while, they’re happy to know they have each other to count on and motivate.

Because that’s what friends do.

“She is smart, witty and clever. I tell people she’s just like everyone else,” Julia said. “As much as I do for Tyme, it’s always given back to me. My days always tend to be better after I see Tyme.” 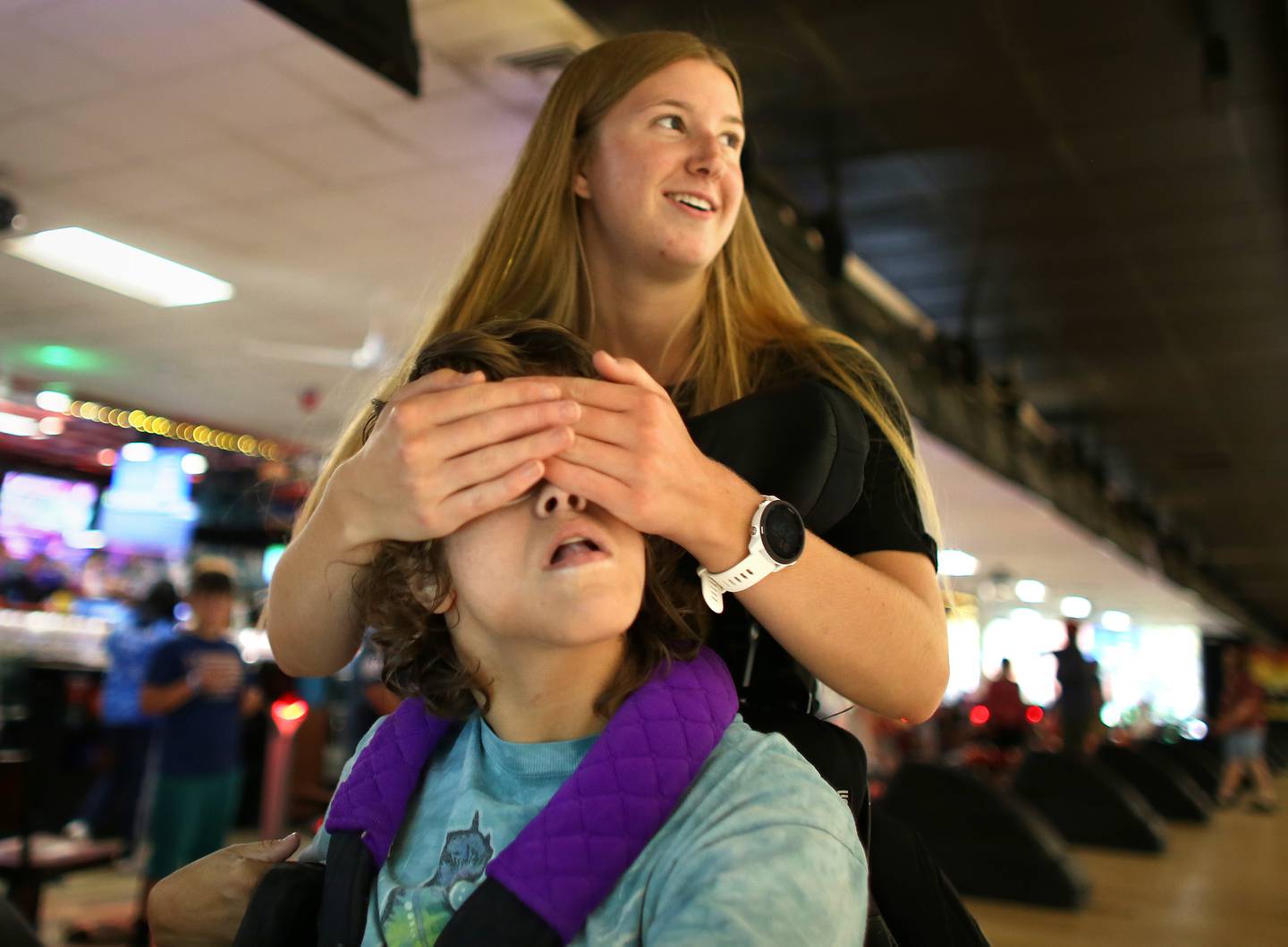 Julia shields Tyme’s eyes after a particularly rough frame. The teasing goes both ways: Tyme got hers in when Julia threw a gutter ball. Stephen M. Katz, The Virginian-Pilot

At the bowling alley on this recent summer day, Tyme waited as a volunteer put the ball back on the ramp. She nudged the ball and it rolled slowly.

Julia could tell what was going to happen. She placed her hands over her friend’s eyes. Only two pins fell. One more and it would have been a spare.

She removed her hands so her friend could see.

“You gotta step your game up,” Julia said.

Then it was her turn.

She took a ball and stood at the top of the lane.

She let it fly, and the ball rolled and sailed into the gutter. She turned back to Tyme and laughed.

With a tap, tap, tap of her knee, Tyme typed on her device.

Julia glanced at the screen.

Source The Virginian-Pilot/TNS via Diability Scoop

Wearable brain-machine interface could control a wheelchair, vehicle or co...
Imagining grasping may help restore hand function in spastic CP children
Will an orthosis help you walk better with MS?
Given a chance to be little ballerinas, and smiling right down to their to...
IPC Para-Nordic World Cup 2017 in Canmore
Disability advocates call for easier access to 'life-changing' technology