Amanda Timm, 21, is now able to cycle again using the FES bicycle at her school, the University of Calgary. Jennifer Friesen photo for Metro.

It sounds like something from Star Trek: an exercise bike that prompts nerves to fire, allowing people with paralyzed legs to cycle. This is not science fiction, it’s a functional electrical stimulation (FES) bicycle that will soon be available for public use in the Thrive Centre, located in the University of Calgary, Faculty of Kinesiology.

“The exciting thing is that there has been a lot of research to show that with this exercise regimen, people can actually get a very good cardiovascular workout which they previously may have had more have difficulty in achieving,” says Ho.

Four years ago, on Feb. 6, 2011, Amanda Timm suffered a T6 spinal cord injury while skiing in Fernie and lost the use of her legs. While it doesn’t seem to have slowed her down too much (she’s a member of the National Prospect Team for Alpine Skiing who enjoys surfing and occasionally bungee jumping) her condition presents its own difficulties.

“I use the bike to keep muscle tone in my legs,” explains Timm. “I’ve been using one for three years, and I find it extremely useful. You don’t have to worry so much about pressure sores. I’m sitting in a sit-ski all day, so I’m not actually using my leg muscles but I still want to keep my leg muscles because it’s so important. A lot of people haven’t heard of the FES bike, but I think everyone should use it if they’re paralyzed.” 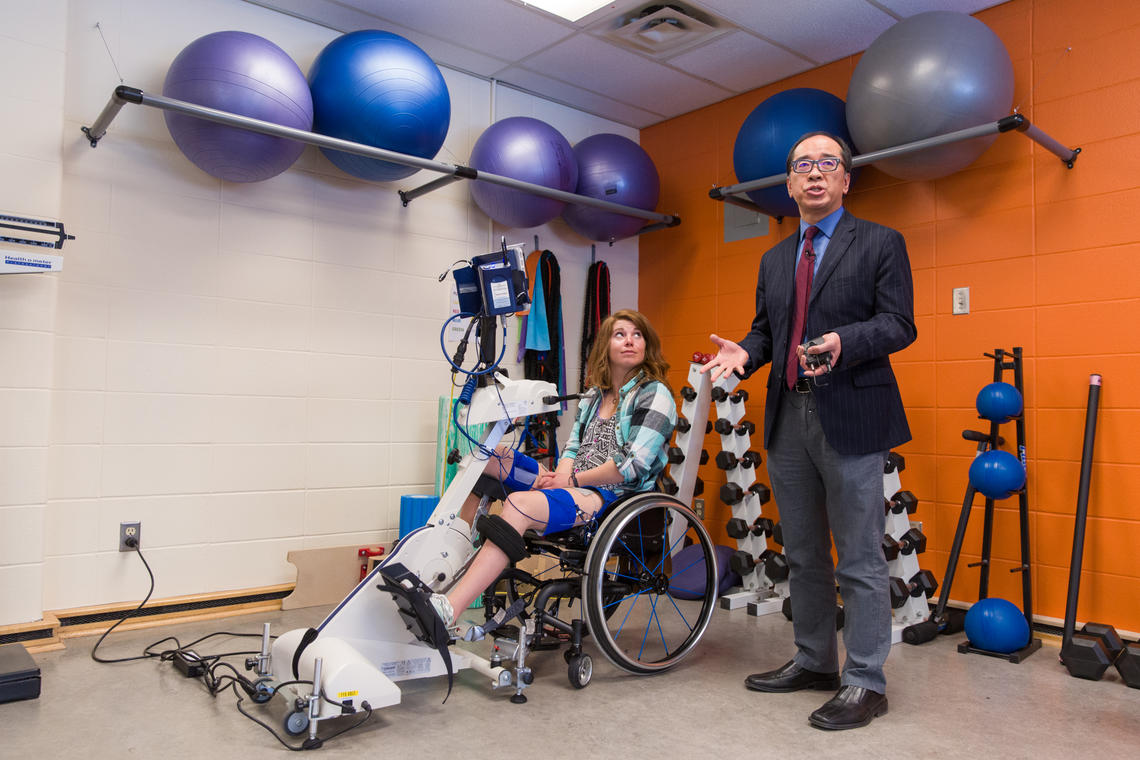 Amanda Timm lost the use of her legs in a skiing accident four years ago. Riley Brandt, University of Calgary

The $32,000 FES bike was made available to the public thanks to the combined efforts of the Amanda Project (a group dedicated to the betterment of Spinal Cord Injury Care), Spinal Cord Injury Alberta (formerly Canadian Paraplegic Association) the Faculty of Kinesiology and the Division of Physical Medicine and Rehabilitation as well as a generous grant from the Calgary Health Trust.

“Our donors are committed to ensuring that the very best in medical advancements are available to those who need it right here in our city,” explains Jill Olynyk, Calgary Health Trust CEO. “Access to the FES bikes will mean that users remain healthier and have less secondary health concerns in the long run. That’s a big win for everyone.”

The FES bike will be available for public use and is part of a network of FES bikes being developed in Calgary. Users will be required to obtain medical clearance and complete an assessment at a qualified centre to ensure the FES bike is suitable for their condition. Once specific exercise parameters have been established, users can then independently move to any FES bike including the one at the University of Calgary. The other two FES bikes are located in the Foothills Medical Centre and the Spinal Cord Injury Alberta office. Calgary Health Trust is currently actively raising funds to provide Albertans with more of the badly-needed FES bikes.

Leaning into the Ogo – seated Segway
The digital puppy that keeps seniors out of nursing homes
How magic tricks help children with cerebral palsy
Experimental scaffold hasn’t reversed her paralysis, but she’s embraced li...
Paraplegic man walks with own legs again
On bended knees: The quest for new knees is complete