Floor-reaction ankle foot orthoses and wedge-based tuning significantly improve ankle and knee kinematics in children with cerebral palsy, according to separate studies from Greenvile, SC, and from Scotland. Researchers from the Shriners Hospital for Children in Greenville used quantitative gait analysis to study 27 children with cerebral palsy while walking barefoot and with a floor-reaction AFO. Floor reaction AFOs are designed to reduce ankle dorsiflexion and knee flexion by limiting the ability of the tibia to advance over the foot during midstance, which is believed to reduce the internal knee extensor moment associated with crouch gait in CP.

The investigators found that the braced condition was associated with a significant decrease in mean sagittal plane dynamic range of motion at the ankle during stance (from 23º to 10º) and mean peak knee extension in midstance (from 29º to 18º of flexion ). The mean minimum sagittal knee moment in midstance also improved from an internal knee extensor moment to an internal knee flexor moment, although the change was not statistically significant. There was a strong positive correlation between mean minimum sagittal knee moment in midstance and the amount of peak knee extension at the same phase of gait. 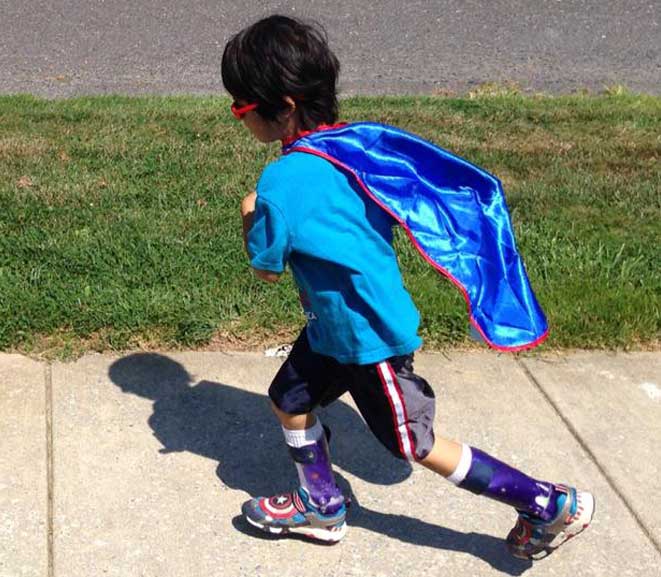 The findings, published in the October issue of the Journal of Bone and Joint Surgery (American), are consistent with those of an earlier Brazilian study of 71 children with cerebral palsy and spastic diplegia. In the earlier study, researchers from the Central University of Sao Camilo in Sao Paulo found that wearing a floor-reaction AFO significantly improved abnormal ankle dorsiflexion and knee flexion motion during stance phase.

However, the Brazilian researchers found that the effects of the device were significant only in patients with moderate or severe crouch gait. Kinematics did not change significantly in children with milder limitations (maximum knee extension of less than 15º). Patients with contractures greater than 10º were excluded from the study. The results were published in the February 2007 issue of the Brazilian journal Clinics.

Researchers from Queen Margaret University in Edinburgh, Scotland, are taking a different approach to orthotic management of children with CP. They theorize that a footwear-AFO combination can be optimized, or “tuned,” by adding heel wedges and/or rockers to realign the ground reaction force vector relative to the center of the joint. This realignment, in turn, is thought to reduce abnormal joint moments.

The investigators tested this strategy in five children with cerebral palsy, using wedges for tuning. Three dimensional gait analysis confirmed that the shank-to-vertical angle was closer to normal after tuning, and that knee hyperextension during stance was significantly decreased. No other gait parameters were associated with statistically significant changes, but because of wide inter-subject variability, the authors believe the sample size was not large enough to detect significance. The findings were published in the November 2009 issue of Disability and Rehabilitation – Assistive Technology.

Previously, the same authors presented their results using a similar tuning method in a 61-year-old female patient with left-sided hemiplegia. When her AFO-footwear combination was tuned with wedging and a rocker, knee flexion during early stance increased and hyperextension during midstance decreased along with pain and swelling. That case was presented in June 2007 at the annual meeting of the World Confederation for Physical Therapy.

Athletic-minded individuals with osteoarthritis can benefit from wearing a valgus knee brace during running as well as during walking, according to research from the German Sport University in Cologne.

In 16 healthy male subjects with varus alignment, researchers analyzed the effect of a valgus knee brace in three different positions: neutral, 4º and 8º of valgus angulation.

Decreases in first and second peak knee adduction moment were seen during walking at both angulations, ranging from 5% to 33%. However, during running the only significant change in adduction moment was seen when comparing the 8º condition to the no-brace condition, a decrease of 11%.

The results were e-published on September 14 in Clinical Biomechanics.

Recovery of calf muscle strength after acute Achilles tendon rupture is not significantly different when treated nonoperatively with functional bracing or treated surgically, according to research from the Netherlands.

Investigators from Utrecht Hospital performed isokinetic strength testing in 31 surgically treated patients and 25 conservatively treated patients, after three months and at least six months of follow up. After eight to 10 months, similar plantar flexion strength deficits were observed in both groups. The only significant difference between groups was seen for plantar flexion strength at 90º/sec at the long-term follow-up measurement, when conservatively treated patients were significantly stronger. The findings were published in the October issue of Foot & Ankle Specialist.

The strength study involved a subset of patients from an 83-subject randomized controlled trial, the first results of which were published in the September 2008 issue of the American Journal of Sports Medicine. That paper found that time to return to work differed significantly between groups but that complication rates, return to sports, pain and patient satisfaction at one year did not.