The South Health Campus is a big step closer to opening a pediatric emergency care space because of an anonymous donation of $3.9 million. 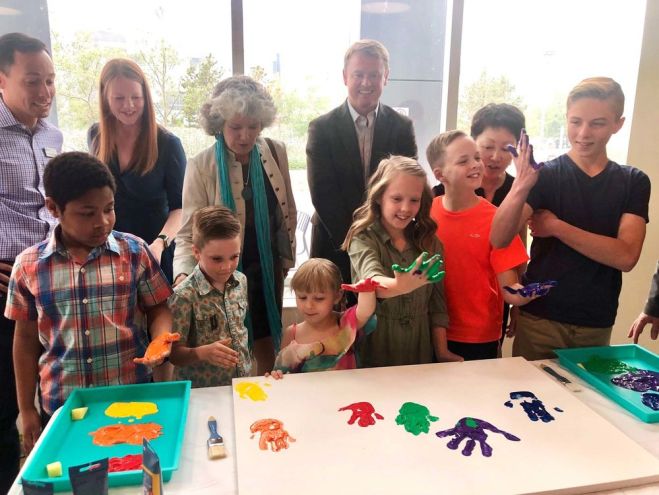 Kids covers their hands in paint and are joined by dignitaries for the announcement of a $3.9 million donation for a pediatric emergency care space at the South Health Campus in Calgary on Friday, May 31, 2019. Stephanie Babych, Postmedia. Calgary Herald

The campus has witnessed a growing need for a pediatric pod as one in every five patients in the emergency department is a child. The new care space, announced Friday, is expected to serve about 14,500 patients each year.

“This means so much. We have an amazing children’s hospital here in Calgary already, but it is (about 35) kilometres away from this location,” said Health Minister Tyler Shandro after the announcement. “Calgary is growing so much with so many young families here.”

Instead of a ground breaking ceremony, children painted their handprint onto a canvas to announce the start of building the pod #yyc pic.twitter.com/4YHADL6xzi

Matt Jones, MLA for Calgary-South East, said the pediatric pod is needed so that families don’t have to drive across the city for the care they need, which can cause additional stress for children and parents.

“I have four kids but with three boys I have been here before, and they’ve had to use the themed rooms already here,” said Jones. “It puts them at ease and when children are at ease, parents are at ease.”

Mike Meldrum, Calgary Health Trust president and CEO, said the pod will be a customized and comfortable area in the six-year-old hospital, with nine beds and bright murals on the walls.

“We can see that different spaces like this make things better for the families that live here,” said Meldrum. “We often hear from people who can look outside and see the hospital on the horizon. It’s a comfort that great care is so close to home, especially for those with young children.”

The hospital’s medical director, Dr. Colin Del Castilho, was bouncing with excitement during the announcement.

“I consider the South Health Campus my sixth child, no offence to my other kids but this one has been the hardest one to raise,” said Del Castilho as those listening laughed.

“We’ve been very busy… The emergency department has taken it upon themselves to do bake sales and try to raise funds through a Fun Run in September 2018. At the pace we were going, I told them, You’re doing a great job and in 4,000 years, we will get that pod.”

Del Castilho expressed his gratitude for the person behind the anonymous donation. South Health Campus had been fundraising the money for the pediatric emergency care space for a while, and with the addition of the $3.9-million donation, the pod is expected to open over the summer.