The agony suffered by Diamo Parvez motivated parents Samiya and Naveed to alleviate the suffering of others through the use of an array of cutting-edge technology. 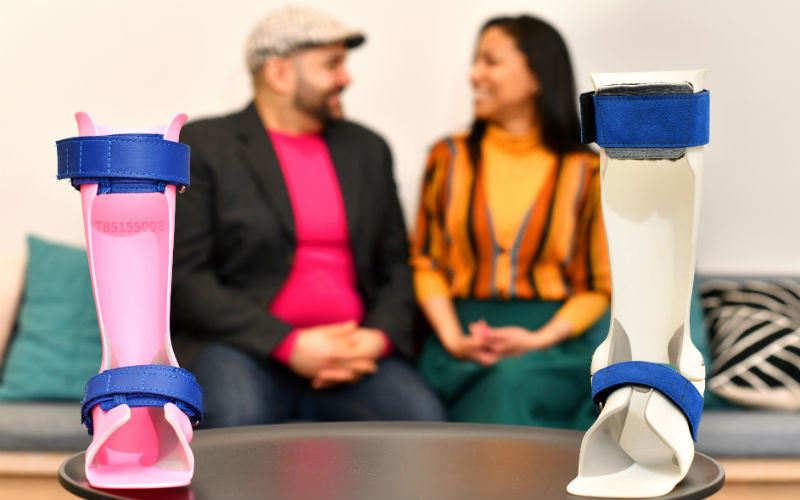 Andiamo is using Big Data, AI and 3D printing to transform the lives of children

Tragically, Diamo Parvez suffered unimaginable pain before dying from complications associated with his cerebral palsy at just nine years of age. Yet, thanks to his devoted parents Samiya and Naveed, his life has a legacy which it is hoped will help millions of others.

In 2014, two years after Diamo passed away, they founded HealthTech firm Andiamo to improve and fast-track the process of designing and manufacturing custom-made splints and braces to support the spine and limbs of disabled children.

A combination of its inspiring mission and cutting-edge development of an array of technologies – including Big Data, machine learning and 3D printing – has led to Hackney-based Andiamo being voted the capital’s most exciting tech firm by judges and the general public in our London Tech 50 ranking for 2019.

Its existence owes everything to a little boy born in 2003.

“Diamo was born with severe disabilities caused by medical negligence. They resulted in him having cerebral palsy and being quadriplegic,” his mother Samiya told BusinessCloud.

“He couldn’t really communicate. He had severe developmental delays and everything had to be done for him. He needed care 24/7.

“[As he grew] we came to understand that he needed equipment to support him. A back brace was everything to us: without it, he was unable to sit in his wheelchair, or in his chair at home. I couldn’t put him on a bus to go to school: he would literally slide down because he was so floppy.

“With the back brace, all he had to do was just lift his head up – that’s all he had to concentrate on. All of a sudden, the world around him opened up: he had good posture, he would sit in his chair and you were able to feed him properly.” 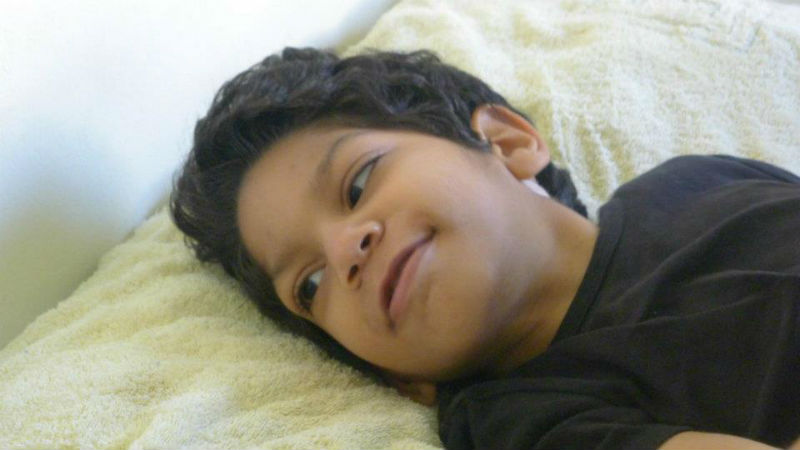 However, the process of having a brace custom-made to fit Diamo was a torturous one and not even guaranteed to succeed. Samiya had to pin her son down for an hour at a time while a plaster-of-Paris mould was taken around his body.

“I had to literally sit on him to make sure that he wasn’t moving whilst the plaster was drying. He screamed the place down because he hated it… I’d explain to him ‘look, this is something that you really need, and it will be beneficial for you’, but he just couldn’t understand.”

Three months later the orthosis would arrive. “If we were lucky, it would only need shaving a bit here and there to fit him,” said Samiya. “If we were very unlucky, we would have to go back for adjustments again and again until we needed to make another mould from scratch.”

Senior orthotists successfully made allowances for Diamo’s growth when making the braces, but more junior medical professionals were often unable to make such an accurate judgment. “We had to have it done because the alternative was unbearable,” said Samiya. “Not being able to feed your child, or him not being able to eat properly, is unacceptable.”

He also needed splints for his legs and hands. “They would literally just shred his legs to pieces and I would end up not putting it on him. I’d be like, ‘I’m not going to do this to my boy’.

“The mum of one of Diamo’s schoolmates stopped putting orthotics on her boy’s legs and at some point there was talk of him having corrective surgery [as a result]. But they just did not work because they never fitted.

“It was crazy… it was like a conveyor belt of children, one at a time going forward to be measured with no time for discussion of what the child needed. Had they even understood the outcome they wanted for that child?” 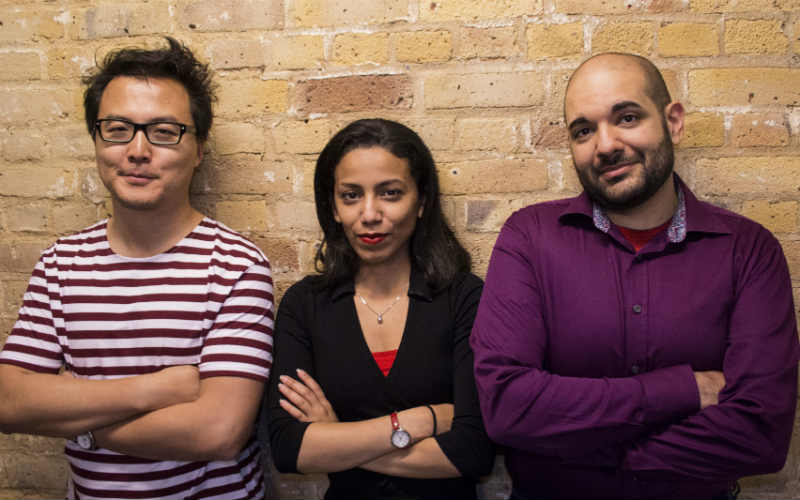 There are a declining number of clinicians in the orthotic and prosthetic industry, which is leading to reduced quality and longer wait times. “At the last calculation I think about 2.1 million people were going through the orthotic services in the UK and there’s less than 300 orthotists who are prescribing them. And not all of them are full-time,” explained Samiya.

“It’s just getting worse because the services are being cut – absolutely slashed to bits.”

Samiya, who is originally from Oman, worked on navigation mapping systems before becoming a full-time carer to Diamo. Her husband Naveed is an East Londoner with experience of working on tech projects for the likes of Tesco and the NHS while friend Lee Provoost, their Andiamo co-founder, was in charge of the digitisation of the passport renewal process.

“It snowballed really quickly. Suddenly we had a company and early stage backing from Bethnal Green Ventures,” said Naveed.

Andiamo launched the first version of its product to test with clinics in 2016.

“The first, important step is not about technology,” continued Naveed. “We try to understand what type of appointment the family needs: for example, we had a young boy who had severe autism. We told his parents that he needed two hours to calm down and get used to the environment before we started any tests. They said ‘no one’s ever done that for us before’ – it’s all 30-minute appointments.”

Andiamo carries out a full 3D scan of how the body is moving which is reviewed by a mixture of humans and artificial intelligence with three desired outcomes in mind: clinical, that of the child and that of the parents.

It can then design an orthosis – which Naveed describes as a ‘precision wearable’ – from scratch which is 3D-printed in a matter of weeks. 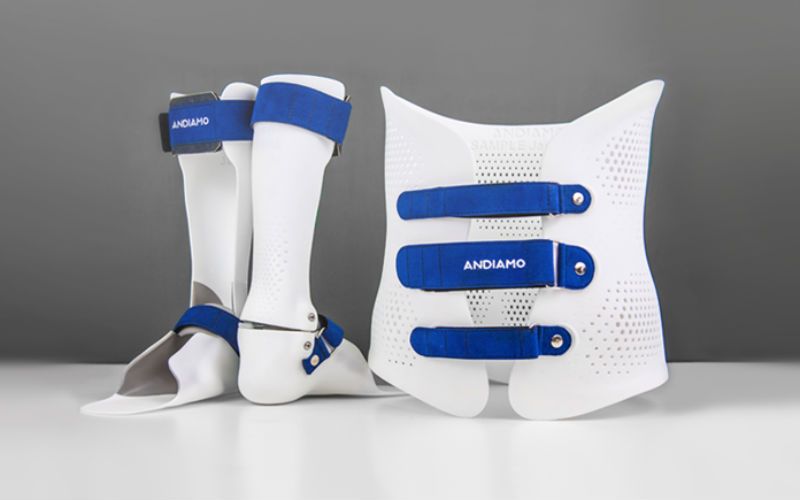 “We approach the problem from a very different angle. We didn’t set out to make a better product; we set out to deliver a better outcome for a family,” said Naveed. “There is no choice for us: we have to do this. We have to fix it. It’s an imperative.

“There is no discussion about me wanting to do it – it has to be done. We’ve approached everything in that mindset.”

This has led to Andiamo, which took on £1.7m investment in 2018, attracting attention from the biggest players in the technology industry.

“Our ignorance has been quite powerful,” says Naveed. “We thought that 3D printing looked really mature at first but 18 months in a major 3D printing organisation called us up and said ‘no one’s ever actually printed stuff to be put on a real person before and we don’t know what’s going to happen’. As we’ve got deeper and deeper into it, we’ve realised that there are a whole bunch of things that have to be fixed [to make it work]. It’s almost like we have to force it forward.

“Later we realised from talking to other people that we were way, way ahead of what everyone else was doing. Google even rang us up to talk about the funding they were putting into the sector!

“Even now, people tell us that the AI we’ve built is way ahead of everyone else.”

The Avanti automation platform is currently being used in the UK and the Nordics and is part of a £1.2m study with Barts NHS Health trust. To date Andiamo has helped 80 people with their condition, assisting many of them over a long period.

Naveed hopes that a new clinic in central London – due to open in October – will be the springboard to achieving 10m positive outcomes by 2030.

“It’s a centre of excellence for us – potentially a training ground for clinics in other parts of the UK and the world,” he said. “We’re looking to spread across the UK, the Nordics, the Middle East and the USA.

“Lee and I come from enterprise technology backgrounds so we’re used to building services that have to serve loads of people. We’re essentially licensing the whole platform out to healthcare providers so they have the power to do what we do.

Close up of the AFO showing the Andiamo heart logo. TCT Magazine 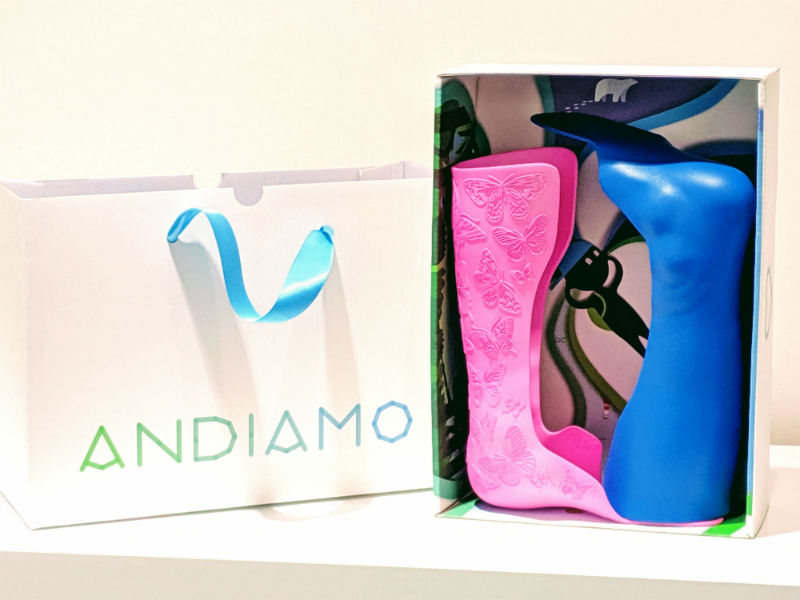 Karthi Velayutham, director of Women Who Code London, was one of the London Tech 50 judges who backed Andiamo as one of the capital’s most exciting tech firms.

“Technological achievements like Andiamo reinforce the hope and faith that technology can be a tool for the betterment of human life [and] positively impact the life of young people,” she said.

“Let Andiamo be an inspiration to all those [with the same goal]. I send them by best wishes to reach all the needful in every corner of the earth.”

It may be too late to help Diamo, but his memory is treasured by his parents and brother Lu’ay and sister Arya.

“Diamo was very quiet, very observant, and knew what he liked. He never liked kisses from Nana!” Samiya reminisced. “He had a favourite teacher and he really enjoyed pasta, chicken and vegetables. In general, he was quite happy within himself.

“He loved these fans with lights on them – they made his eyes just spark. And he liked music: he really, really liked James Blunt. I have no idea why! A carer put it on and, for the first time ever, Diamo was lying on his back without crying. If you put him on his back normally he would scream the place down.

“The year before he passed away, we got VIP tickets to a concert and he met James. 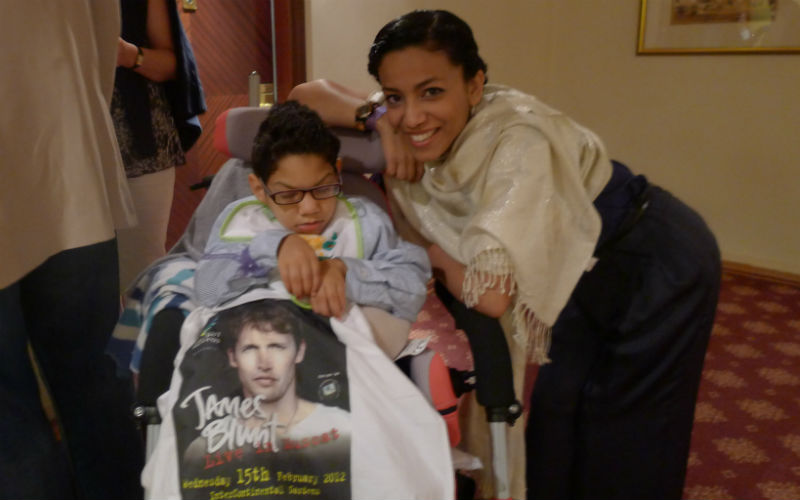 “Diamo died on his birthday on the fourth of March when Lu’ay was coming up to three years of age. He’s now 10 and still remembers his big brother. He was very, very protective of him. It took him a while to understand that Diamo was not coming home because he did not understand what death meant.

“Arya once said ‘I wish that I could see him because he saw me.’ And I told her he passed before she was born, so he couldn’t have seen her.

“She looked at me and went ‘actually, he did, because he’s in heaven. And people in heaven see everything, so he’s been watching me.’

“That’s her interpretation of what happens after life. That’s how she deals with it.”