“People will look,” warned Minna Caroline Smith in Lapham’s Quarterly about her pioneering tricycling touring of the coastal North Shore in eastern Massachusetts. It wasn’t just that the self-powered adult tricycles were novel, but so, too, were the women riding them. It was 1885. 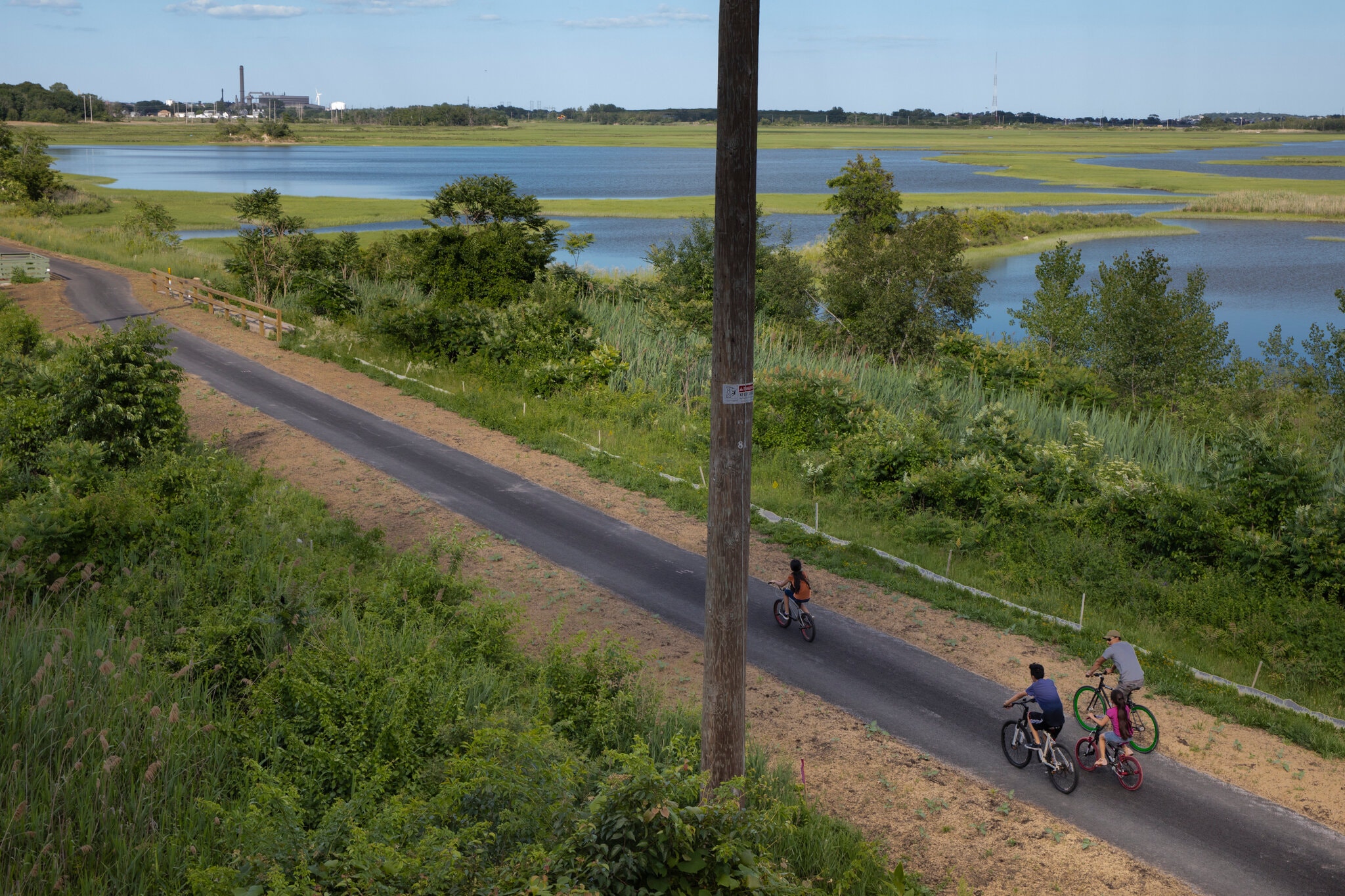 The gender shock may now be gone but as the only person steering a tricycle on the same roads a century plus later, I knew exactly what the incisive Smith meant. My weekend travel convenience, a low-riding recumbent trike powered by hands instead of feet, was arguably even more attention-getting. This was a first try at adaptive bike touring. After a lifetime of riding around the world, I was changing to a hand cycle after spine cancer and a complication that left my legs partially paralyzed. 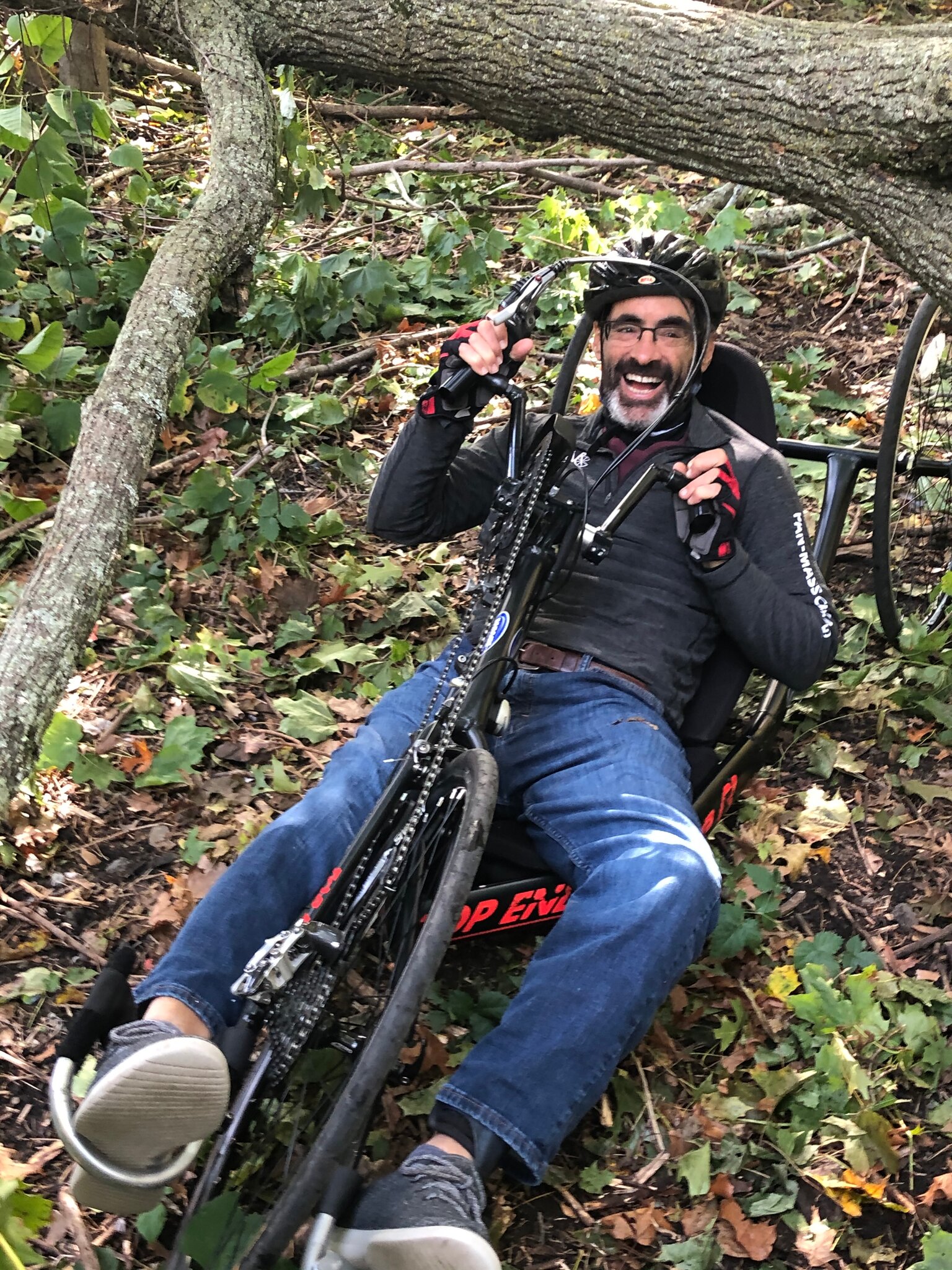 The author, Todd Balf, pedaled beneath a storm-tossed tree on the route. His low-riding recumbent tricycle is powered by hands instead of feet. Neil Stanton photo, The New York Times

I had hesitated initially, aware of how low-riding would look. When I finally flipped the mental switch, I went all in. In the ultralight, performance trike I had rented from a shop called Northeast Passage in Durham, N.H., I was supine with my legs suspended in aluminum stirrups as if stretched on a low chaise longue with my head and upper torso propped up with a back-cradling husband pillow. The pedal hand grips were eye level, the black cranks and silver chain whirring around in front of me like a hamster wheel. A long pole with blinking LED lights and an orange flag trailed behind me to alert the rest of the world to notice me. 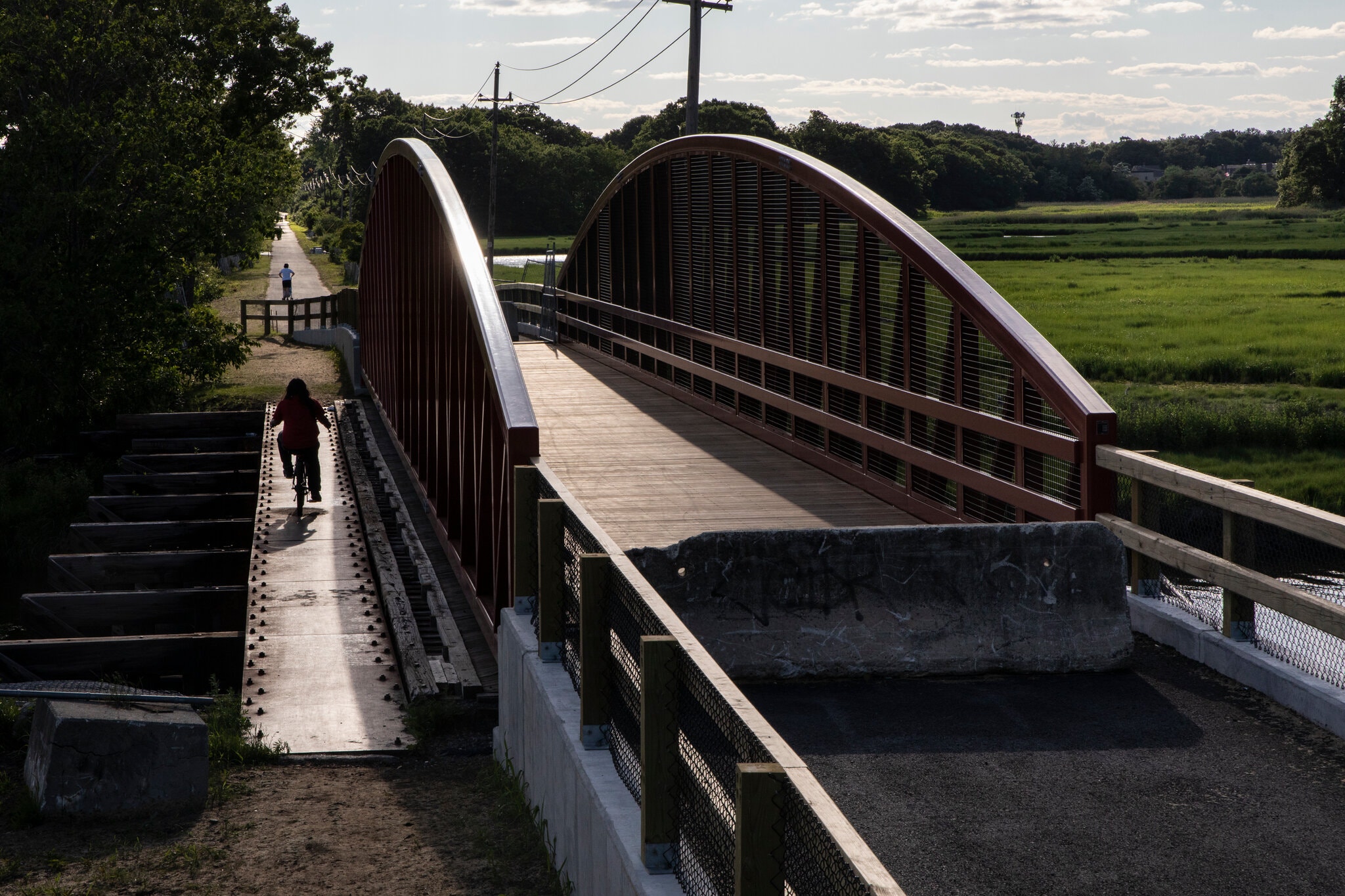 In 2019, the author traveled over the then-crumbling Saugus River footbridge with the help of cycling friends. Tony Cenicola photo, The New York Times

In two days retracing Smith’s 35-mile route from Malden Center to Cape Ann, I had kids gush at me and my curious rig, and young adults clandestinely stick their iPhones out car windows to catch me on video. One person whooped so unreservedly it shattered the village quiet in Manchester by the Sea.

“Do you fall asleep in that thing?” an older man in the Magnolia section of Gloucester asked covetously. At Manchester’s Singing Beach, a motorist complained I was hard to see and offered a safety suggestion. “You should go find a track somewhere,” he said.

I was glad to be riding again. I identified with the 19th-century Smith, not as a freethinking crusader exactly, but as part of the disenfranchised — a disabled man trying to join able-bodied fun. I felt a tie. Our modern, mixed-gender, middle-aged party consisted of six riders: a few experienced cyclists, others first timers. My wife Patty used a pedal assist e-bike, the rest standard issue road bikes. The vibe would be low key; there was no need to rush.

Boston’s North Shore has always been a premier cycling destination. “In and Around Cape Ann,” a popular wheelman’s guidebook published in the 1880s, lauded the views from the largely well-tended and graded dirt lanes. In 1898, in the heyday of the pre-car bike riding mania, a Boston newspaper printed a lavishly illustrated map of our bike touring route, devoting hand-drawn individual panels to snapshots of bridges, churches, elm tree-shaded gateways and signature offshore views. 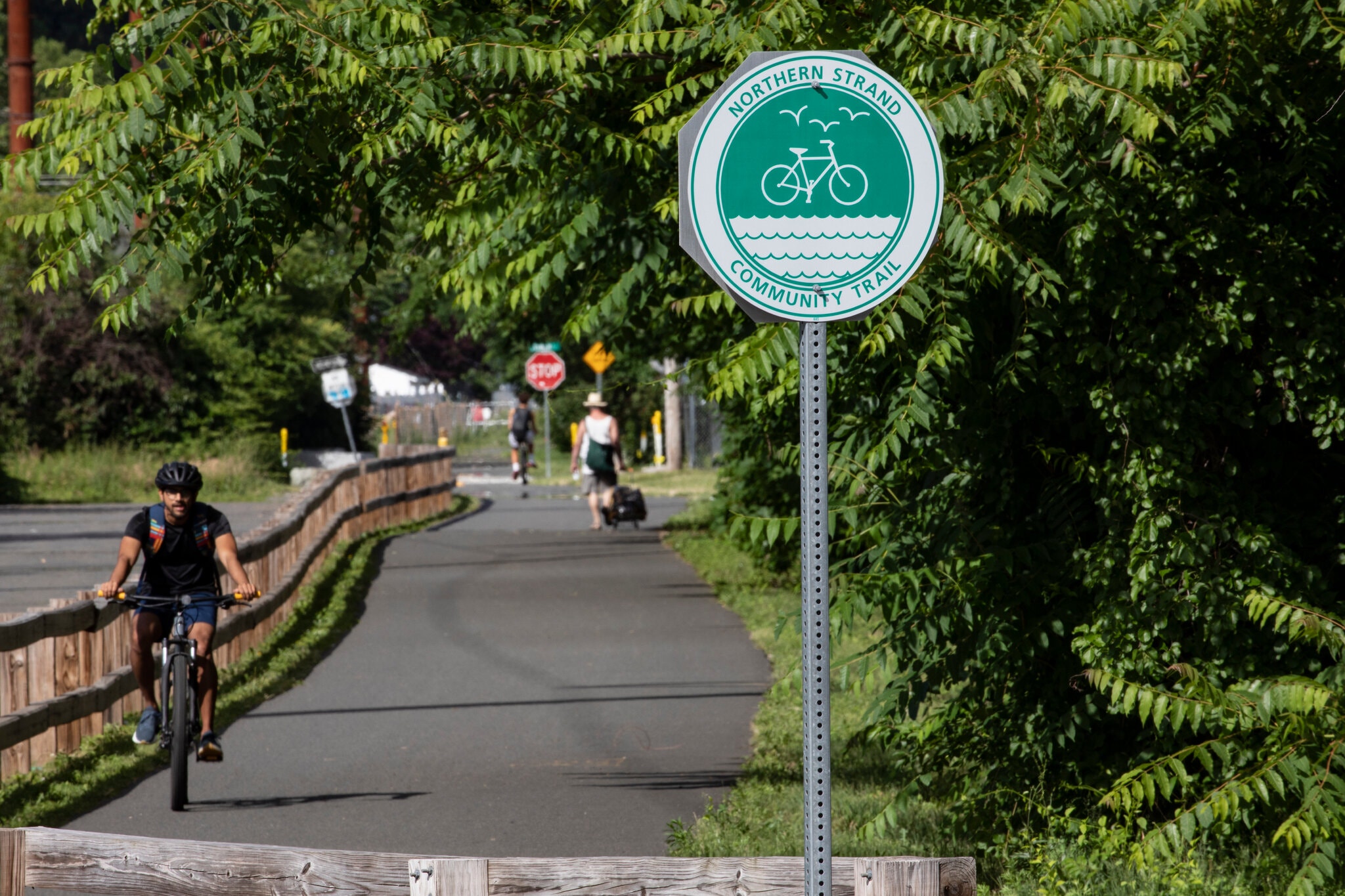 The gathering point, above, for the start of the route retracing a pioneering cycling tour taken more than a century ago. Tony Cenicola photo, The New York Times

The modern route’s start was no Currier & Ives postcard — a bustling Route 60 fronted our suburban hockey rink parking lot gathering point. But minutes later the automotive tumult disappeared as we set out on the Northern Strand Trail, an eight-mile, newly constructed rail trail through Everett, Malden, Revere, Saugus and coastal Lynn. The trail is also part of the East Coast Greenway, a partially completed 3,000-mile bike and pedestrian network linking towns and cities from Key West, Fla., to Calais, Maine.

The wide, well-marked trail was a revelation, creatively bordered with community gardens, vibrant murals, public sculpture and assorted green spaces and sprawling salt marshes. The road surface began with pavement then continued on gravel and dirt (since our Northern Strand ride in 2019 there have been several trail improvements, including a handsome new bridge across the Saugus River, and pavement throughout.)

We traversed on the trail beneath the Route 1 overpass and around the Revere Showcase cinemas. All of us, lifetime New Englanders and some living only a handful of miles away, kept saying some variation of the same thing: We had no idea any of this was here. 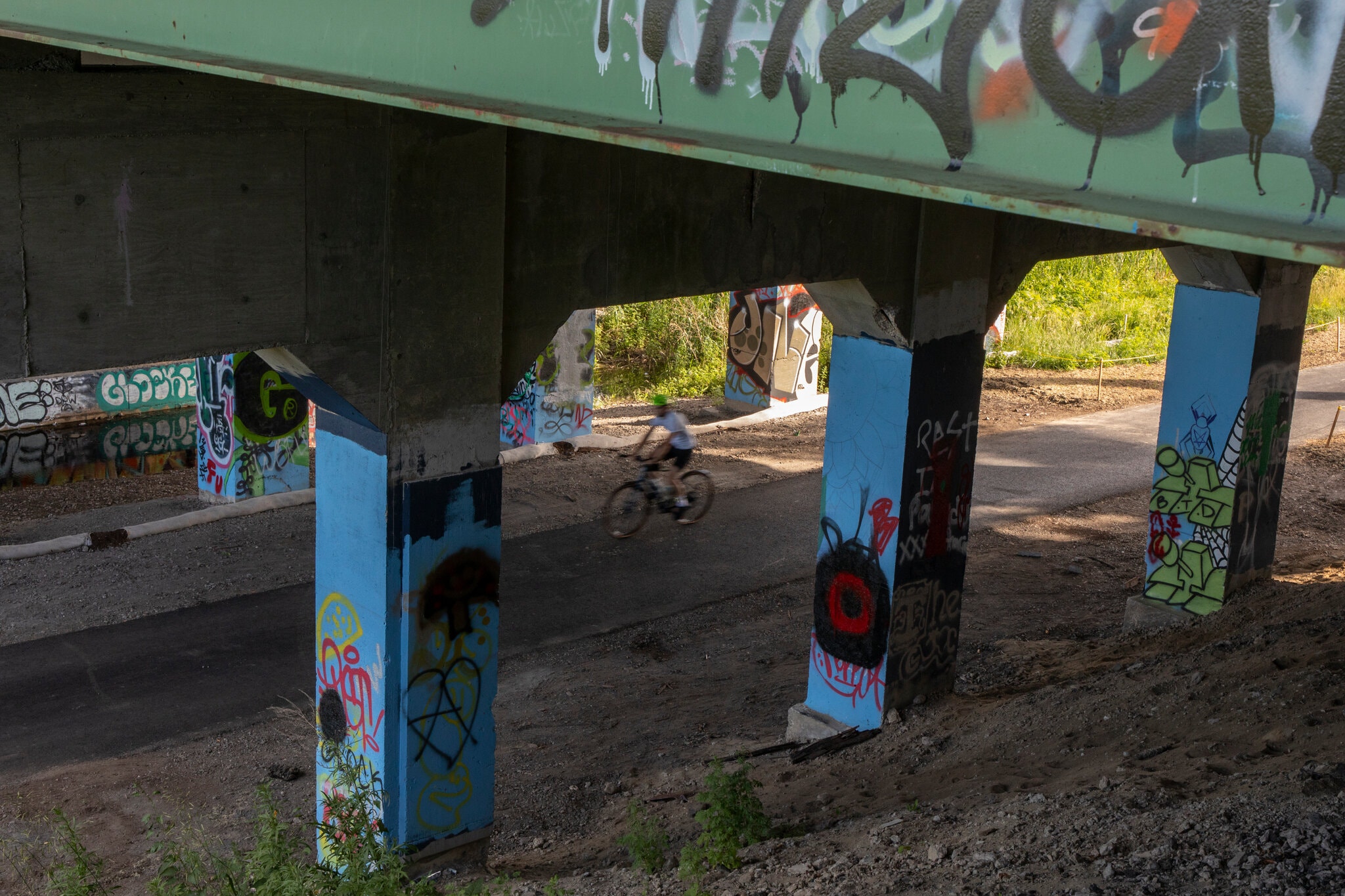 In Revere, Mass., the author and his cycling friends traversed on the trail beneath the Route 1 overpass. Tony Cenicola photo, The New York Times

The Rumney Marsh Reservation, a gorgeous 600-acre salt marsh bordering the trail and spanning parts of Saugus and Revere, would have sent Smith’s poetic heart soaring. Only five miles from downtown Boston, the habitat was a stopover for migratory birds and a permanent hangout for majestic tidal giants like great blue herons, one of which we saw flying overhead. 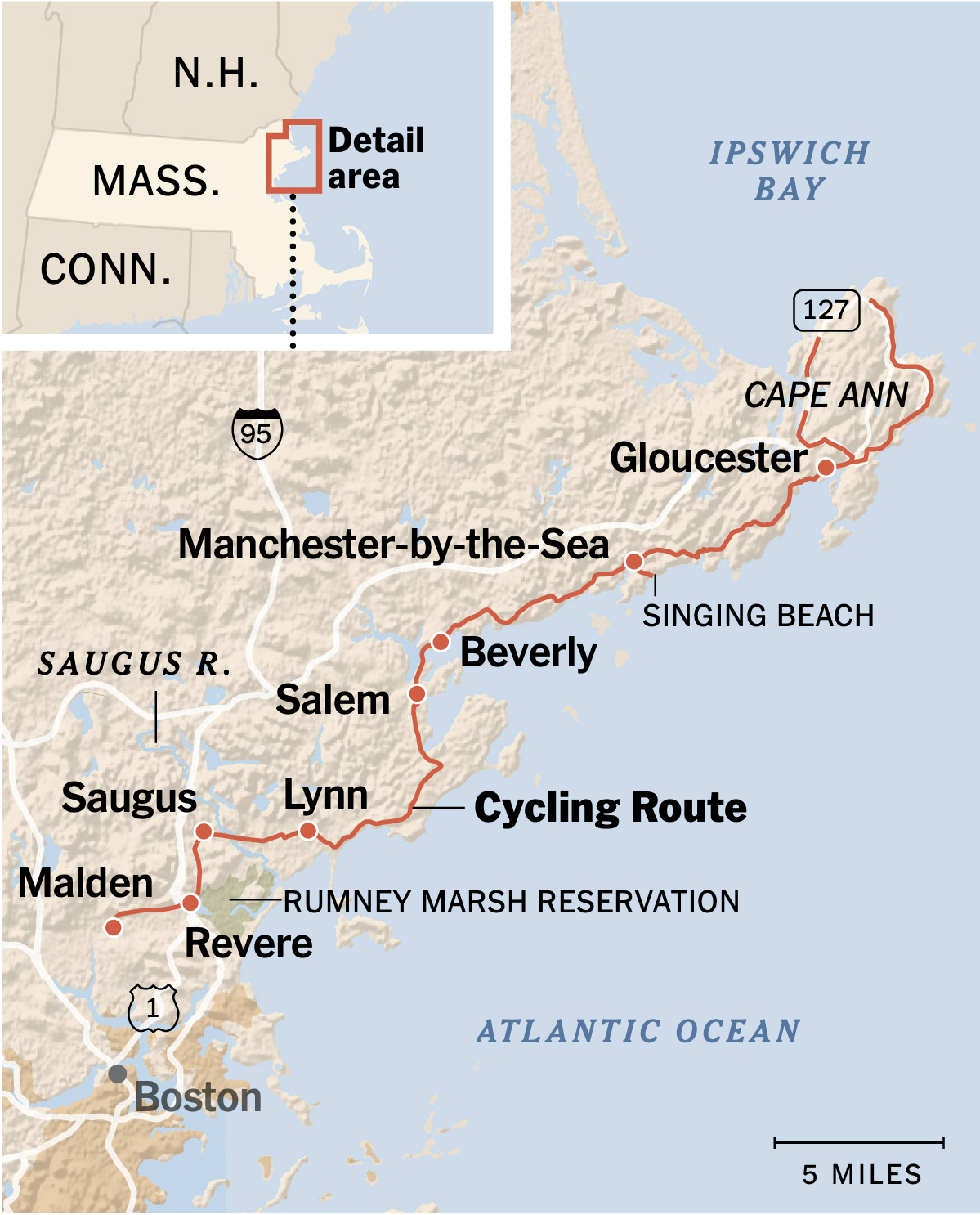 By The New York Times