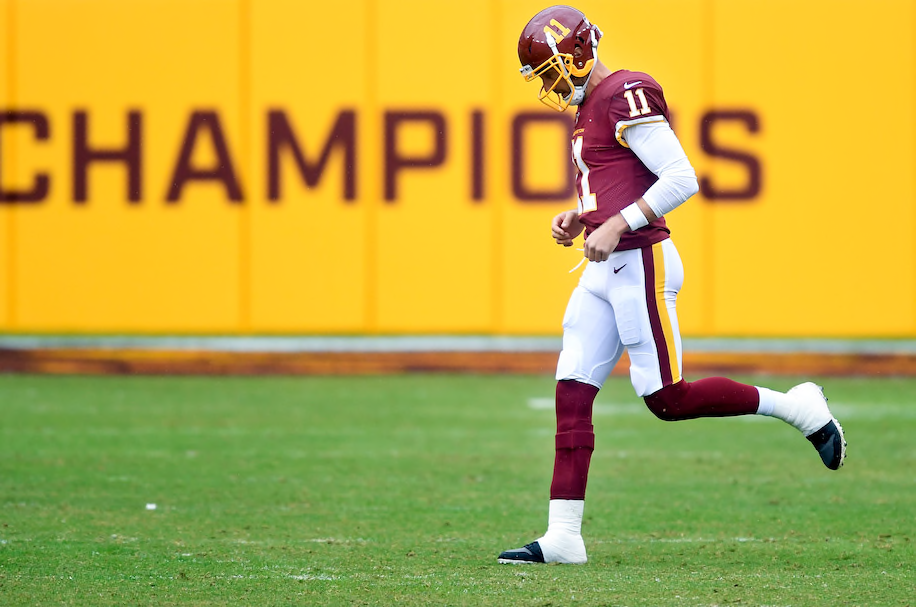 Washington quarterback Alex Smith jogs onto the field in the second quarter of Sunday’s game against the Los Angeles Rams. Toni L. Sandys, The Washington Post

The challenge is to create a device that is both pliable and durable, lightweight yet supportive — a brace that is almost not a brace.

“So which one are we making? The super flexible one?” Mike Muratore asks the patient seated in front of him. “Do you want me to see if they can make them all matte black?”

Muratore, a certified prosthetist and orthotist at Hanger Clinic in Bethesda, Maryland, is on another quest to create the perfect orthotic for a patient. But this patient has ambitions that far exceed those of his everyday clients.
“The more flexible one is better,” the patient, Alex Smith, responds.

“I think they’re better when they’re unfinished on the bottom,” Smith adds, saying that any matte color will suffice. “When they paint them, it squeaks a lot. The matte doesn’t stand out as much, either, on film.

It’s a Tuesday afternoon, just two weeks into the NFL season, and Smith, the veteran quarterback for the Washington Football Team, is at Muratore’s clinic with his surgically repaired right leg shrink-wrapped and cast in fiberglass to create a mold for a new brace as a reporter observes via video conference. Smith has been here before, probably sitting in that same chair in front of that same window as Muratore peppers him with questions while sawing off a cast.

After extensive rehab over the past two years, Smith has overcome nearly every physical obstacle that has resulted from his lower leg reconstruction. On Sunday, he completed his NFL comeback by playing in a rain-soaked loss to the Los Angeles Rams. But there’s one hurdle he will never completely clear.

Smith has foot drop, which means he is unable to lift up his right foot when he walks or runs. For more than a year, Smith and Muratore worked to find Smith an ankle foot orthosis, or AFO, to help him do what no one else is believed to have done before: play quarterback in the NFL after undergoing a limb salvage.

Professional athletes — including Dallas Cowboys linebacker Jaylon Smith and Denver Nuggets forward Michael Porter Jr. — have successfully competed while dealing with foot drop in recent years, opening the door for others to do the same.

“About 10 to 15 years ago, that was a death sentence for your career,” Smith said recently. “To me, those guys are inspirational to me to see if I can go do this.” 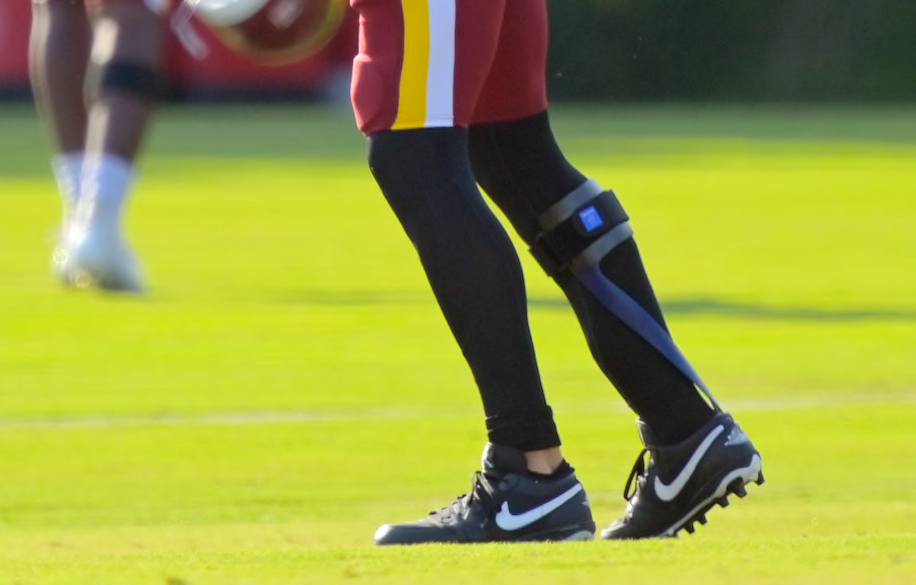 Smith wears the brace during a practice in August. John McDonnell, The Washington Post

Though Jaylon Smith and Porter were the forerunners, Alex Smith is charting a new, unlikely path — one that even specialists watching from afar describe as a miracle.

“To see him back and practicing, let alone… on to the active roster, it’s absolutely remarkable,” said Patrick Maloney, an orthopedic surgeon at the Institute for Foot and Ankle Reconstruction at Mercy Medical Center in Baltimore.

Typically, Maloney said, foot drop is the result of a neurological issue: peroneal nerve damage, as Jaylon Smith had, or the byproduct of spinal surgeries, as in Porter’s case.

“For most cases, it is a temporary event in that the nerve wakes back up and functions again and is able to send those signals to the muscles to contract and bring the foot up,” Maloney said. 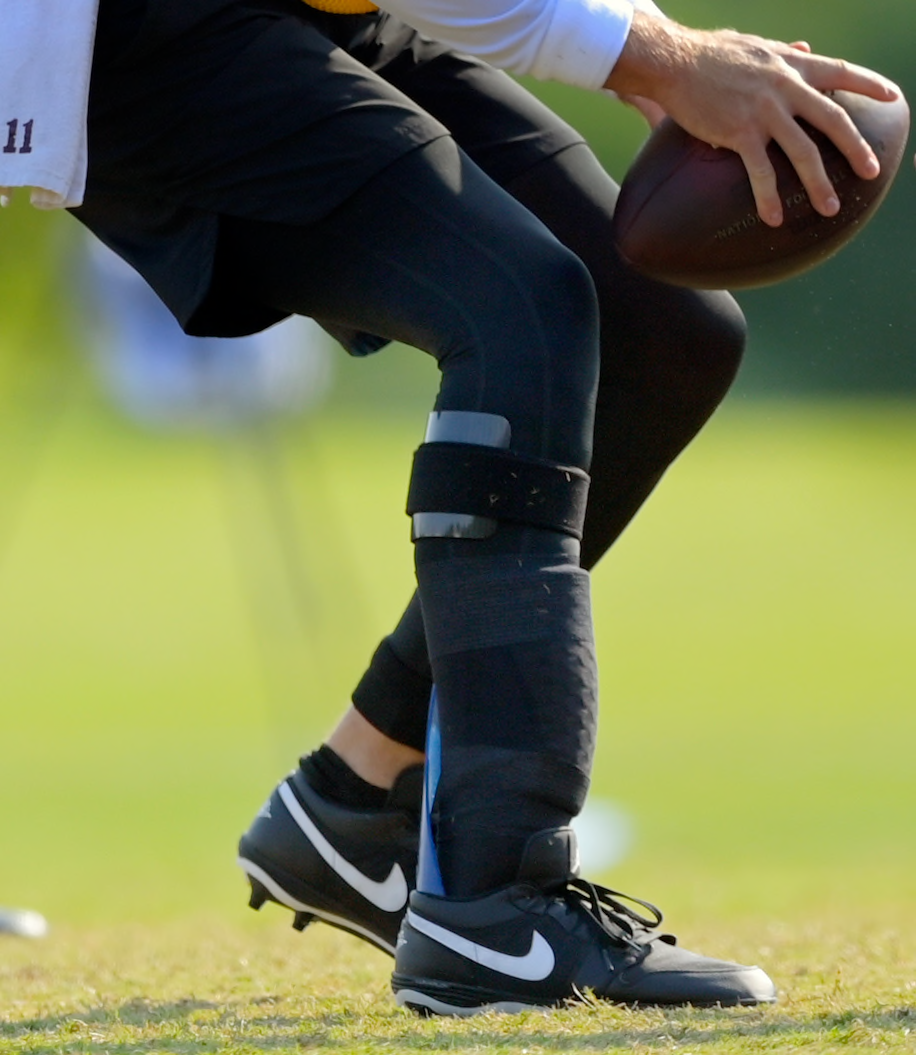 Alex Smith’s foot drop is the result of 17 surgeries to repair his right tibia and fibula after the severe injury he suffered during a game Nov. 18, 2018, and to clean out a bacterial infection that destroyed surrounding tissue. He now has a titanium rod in his tibia and muscles transferred from his other leg that provide coverage and blood flow.

What those muscles don’t provide, however, is the neurological function for dorsiflexion, or the ability to lift the foot up. His peroneal nerve was removed during the multiple debridements.

To gain full clearance when he runs, Smith always will need the assistance of a brace, and finding one that meets his changing needs may require continual customization.

“From the day I met Alex until now, he’s needed less and less support because he’s just so strong,” Muratore said. “He worked on all the muscles around the ones that are absent. …He’s doing more than he probably should be able to.” 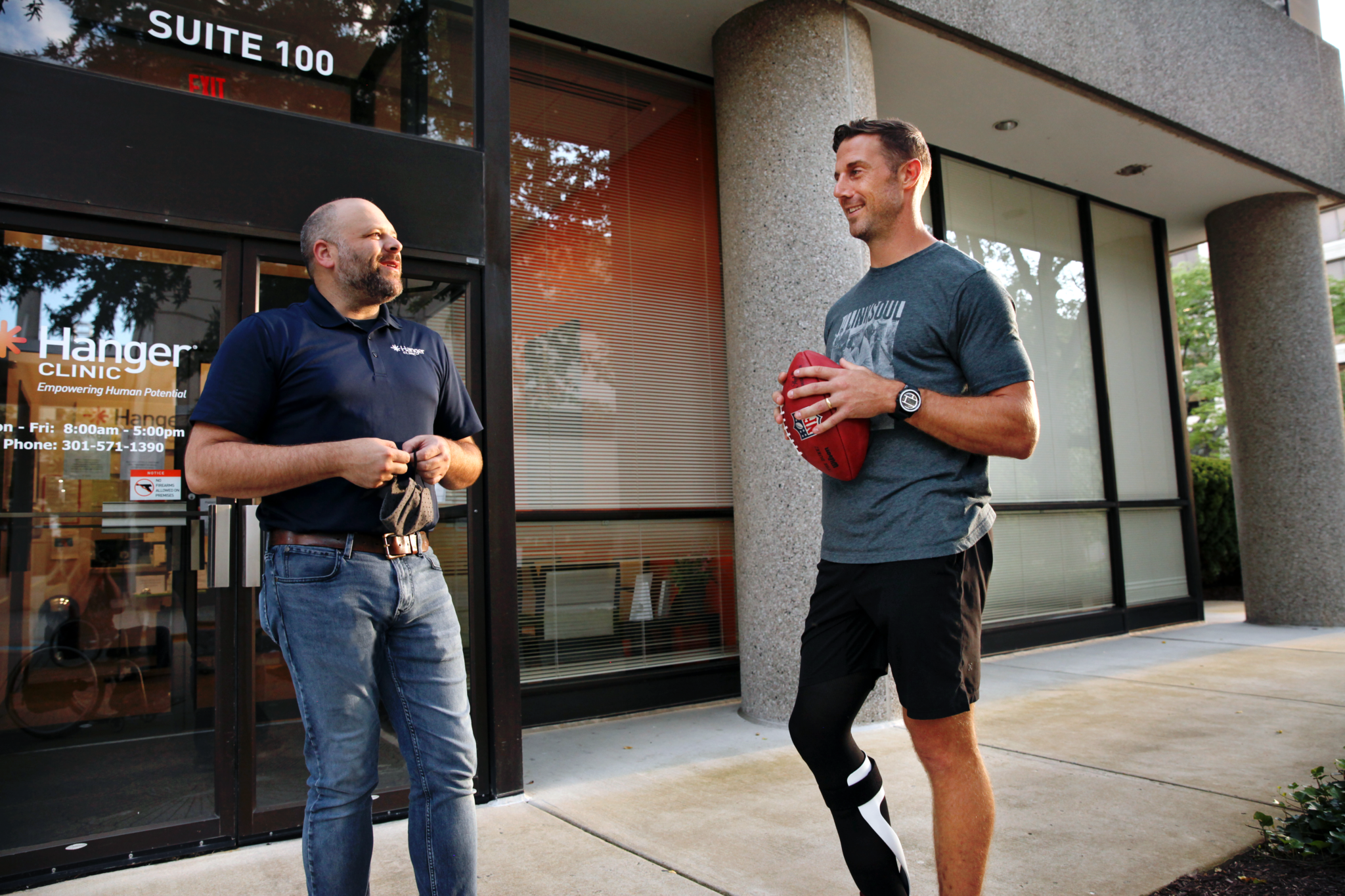 Since August 2019, Smith has tried four AFO models, working with Muratore to customize each. In the early going, Smith needed a brace that kept his ankle from rolling, so Muratore thought he might require a more controlling type of brace. But it soon became apparent that he didn’t.

“He was doing a lot of workouts without any bracing at all, so a high amount of supportive bracing was actually getting in his way and slowing him down,” Muratore said.

Then there was concern about fitting a brace in his cleat. Smith tried a bigger shoe, only to realize that his foot moved around too much. There was also a thought to bring the strut — the part that runs up the back of his calf and connects to the footplate — closer to his leg. But reducing the shoe size tightened it up too much to consider it.

Tinkering with the formula used for the composite materials was a challenge, too, as they sought the right balance of stiff and flexible. Smith currently uses a custom version of the SpryStep Flex, a brace manufactured by Thuasne USA in California. The brace, which weighs all of about six ounces, is made of composite materials more commonly used in aerospace and IndyCar racing, layered in a specific order to achieve an exact degree of flexibility.

“We’re doing a little bit of experimentation because, in this kind of high-impact environment, we’ve not had the opportunity to try something like this on someone who’s so high energy and high impact with this particular device,” said Muratore, who communicates with Thuasne to create new customizations for Smith. “So right now we’re actually making multiple variants of different thicknesses, and we’re basically just going to see what happens.”

With each tweak, Muratore has Smith try basic football movements — dropping back, climbing the pocket, cutting and running — at the clinic before taking it on the field. When further changes are needed, Muratore is essentially on call.

“It’s similar to what we would do for anyone else that had custom bracing,” he said. “It’s just for Alex … his activity goals are pretty unique and require a pretty unique solution.” 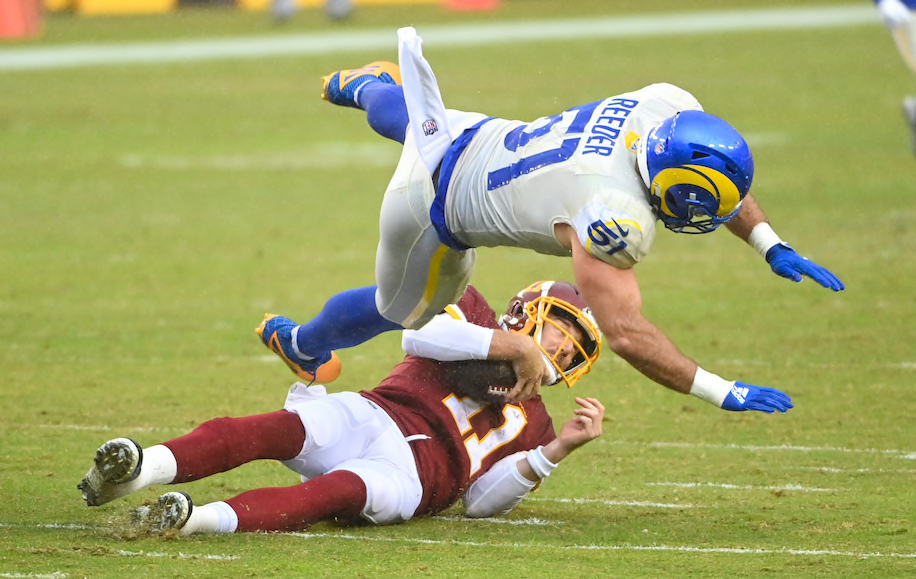 AFOs have been around for decades; they were made of leather and metal before they evolved to plastic. A footplate and upright piece behind the calf create an L-shape at the ankle. Over the past 20 years or so, manufacturers started using carbon fiber and other composites to create lighter, more dynamic AFOs.

It wasn’t until 2016 that the game truly changed for athletes who have foot drop, Muratore said. The Cowboys drafted Jaylon Smith roughly four months after he suffered a devastating knee injury in college that caused nerve damage.

“He had a peroneal nerve injury when they drafted him, and they knew that, and they waited him out and got him the technology to [overcome it],” Muratore said. “They gave him a chance, and they’re being rewarded for that.”

Jaylon Smith wore a custom AFO, the Richie Brace, when he returned to the field in 2017. He played all 16 games that year, then ditched the brace in 2018 when his nerve function started to return. He signed a $64 million contract extension last year and was selected to the Pro Bowl.

For a good portion of Alex Smith’s rehab this year, he wore a brace built in-house by Muratore that was similar to the one Jaylon Smith used. But the first brace Alex Smith tried was inspired by Porter.

“So Alex told me, I think there’s a guy in the NBA who wears one,” Robin West, an orthopedic surgeon and the lead physician for Smith and the Washington Football Team, said in an interview this year. “I found out he was with the Nuggets, and then I called a friend of mine and reached out to the physical therapist there and got connected with the player.”

Porter, a rookie in 2019, developed foot drop after multiple back surgeries and used a customized version of the SpryStep Flex.

“All the movements that are required on the basketball court are a good representation of potentially what it’s like to play quarterback as well, just the different types of movements and being able to have change of direction,” Smith said in a recent interview. “So that’s what first really encouraged me the most.”

Since trying it out late last summer, Smith and Muratore have continually refined it to fit the needs of an NFL quarterback.

“It’s been a process of trial and error,” Smith said. “There are a ton of braces out there, a ton of companies making different products, and for me it’s trying to zero in on something that will allow me to be multifunctional. This is kind of uncharted territory for football players, playing with something with a cleat on.”

As Smith jogged onto the field Sunday, replacing injured starter Kyle Allen in the first game in which he had been active in nearly two years, tucked underneath his burgundy sock was the new “super flexible” brace he was fitted for at Muratore’s office weeks earlier. It was the one with the front of the foot pointed up another 5 degrees and a matte finish so it doesn’t squeak when he walks.

Muratore had reminded Smith of the risk that the added flexibility would pose to the strength of the brace. But on Sunday, in the rain and under the weight of sacks by Aaron Donald and other Rams defenders, the brace held up.
And so did Smith.

“Going back to how much I’ve benefited from the progression of medicine and this rehab, certainly for limb injuries and leg injuries — I do feel like I owe on some level to push this to see how far it can go for whoever may come after,” Smith said.

Your stiff back may not actually be stiff, U Alberta study finds
Knee replacement timing is all wrong for most
Study tackles non-surgical treatment of knee osteoarthritis
People with disabilities failed by dearth of funding worldwide, say campai...
Alberta hospitals battle wave of sick children as viral illnesses surge
South Health Campus, AHS