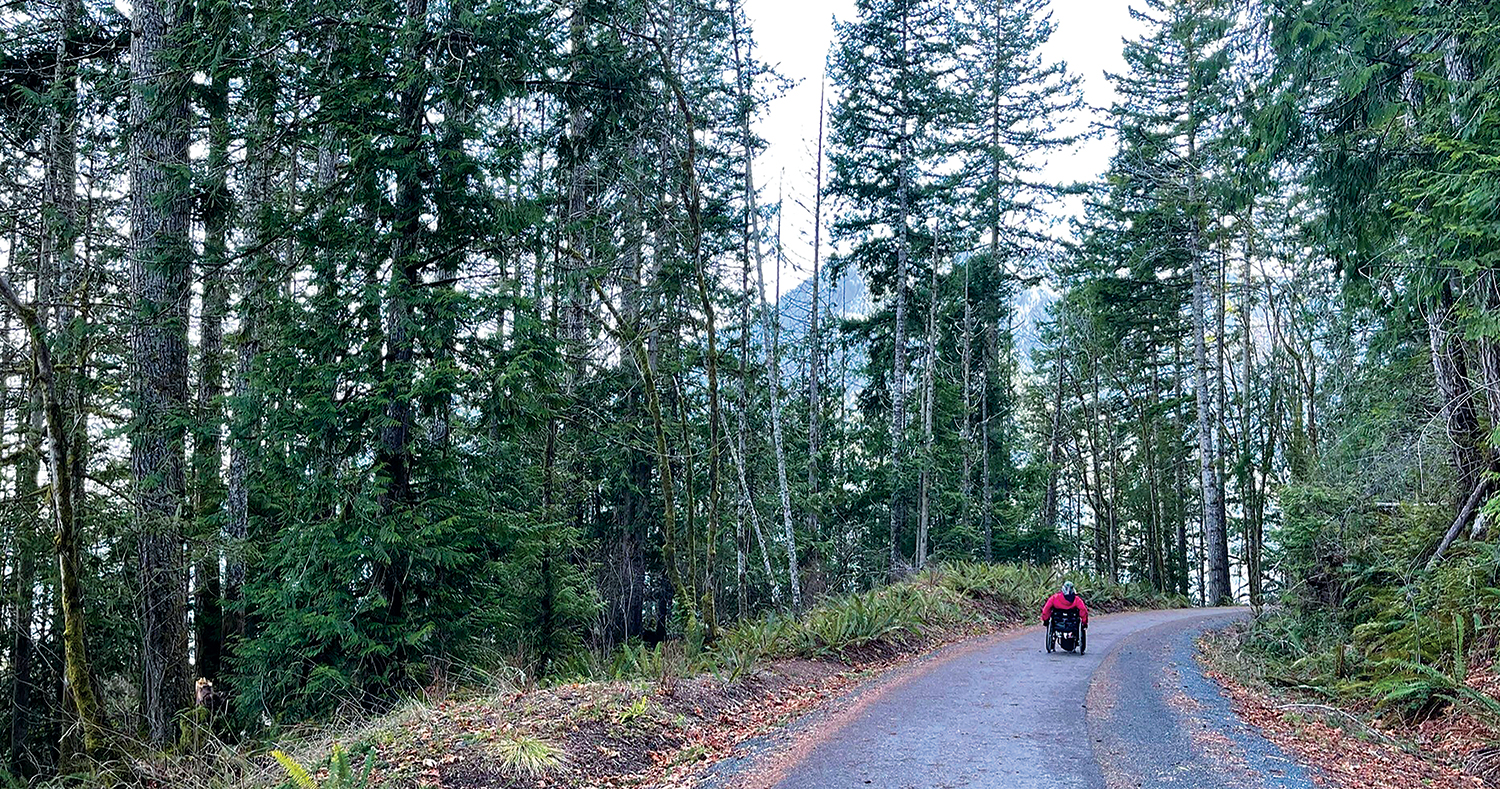 My first visit to the Olympic Peninsula started a tradition for me, rich with many repeat visits and years of discovery. Covering over 3,600 square miles, it has something for everyone. Over the course of a few hours of driving, you can travel from verdant rainforests to rocky coastline and on to snow-capped mountains. Accessible outdoor adventures are plentiful, and it’s a wonderland for nature lovers. 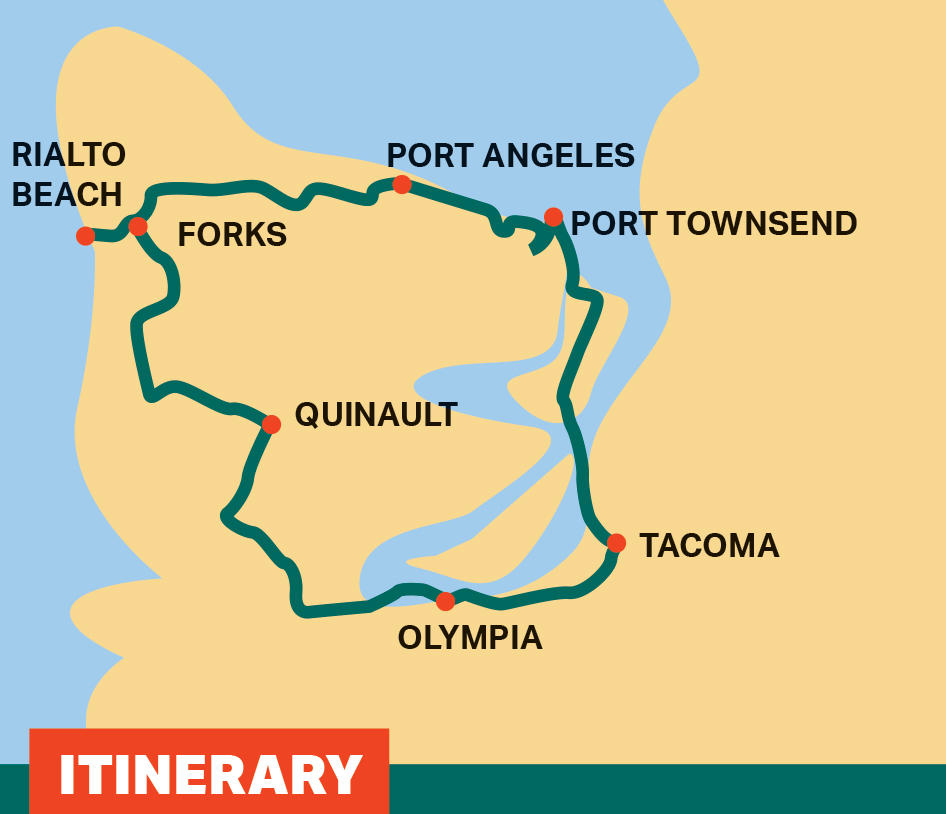 On my many visits, I’ve honed a loop that starts and ends in Olympia on Highway 101, with overnights in Lake Quinault, Forks, Port Angeles and Port Townsend, and several accessible stops along the way. The short distances between stopovers allow more time to soak in each destination and experience the same sense of wonder that overcame me on my first visit. Just remember, traveling the Olympic Peninsula in summer is best because there is massive rainfall — and mud! — during other seasons.

My first stop on my loop was 87 miles west of Olympia on the shore of Lake Quinault. It rains an average of 12 feet per year in Quinault Valley, creating more shades of green than you’ve ever seen, once your pupils dilate to accommodate the dim, dappled light. I followed North Shore Road into Quinault and came to the trailheads for the half-mile Maple Glade trail and the 1.3-mile Kestner Homestead trail, across from Quinault North Shore Ranger Station. 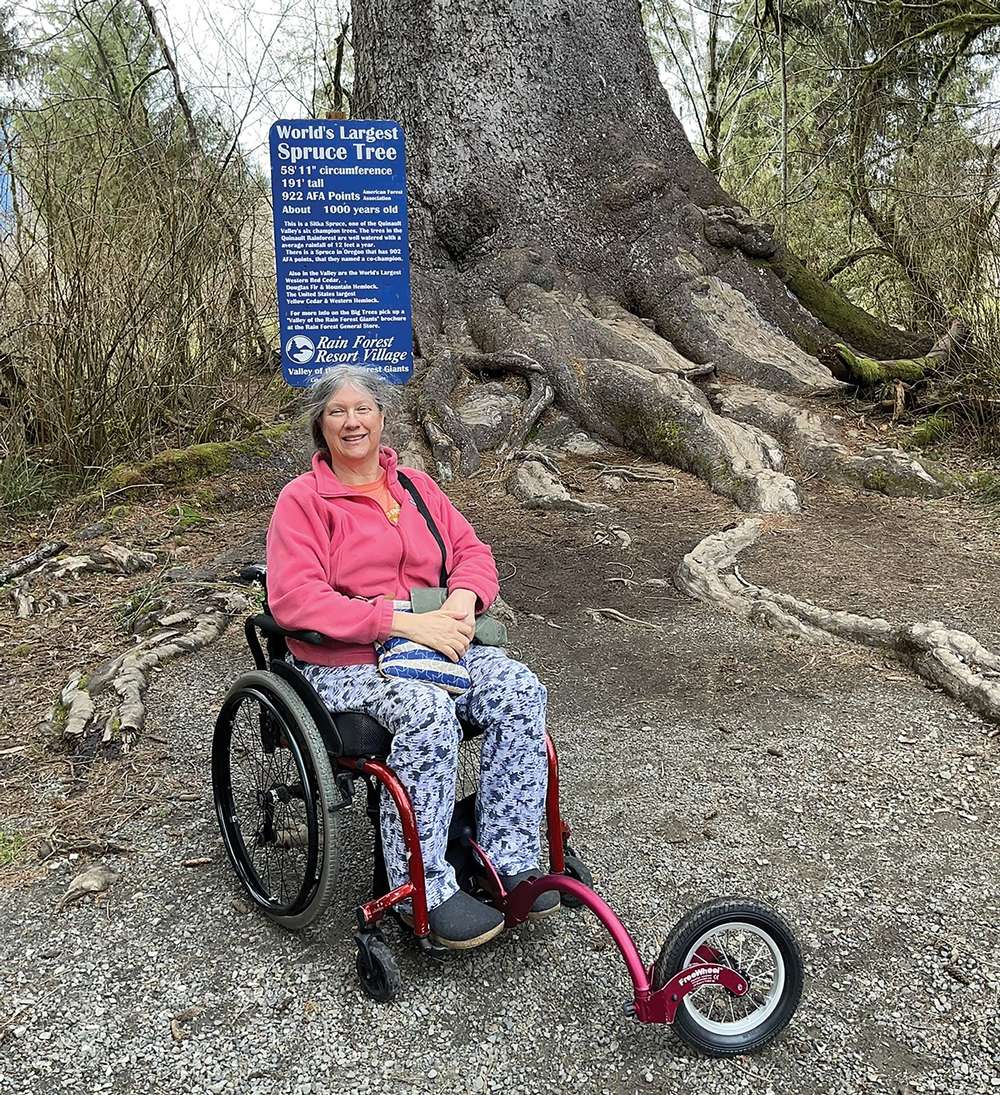 Giant trees (above) and giant mysteries (below) are but a few of the attractions awaiting visitors in the Olympic Peninsula. Lilly Longshore. New Mobility

Both trails were easy in my powerchair, but not ADA compliant. I was thrilled when the Kestner Homestead trail took me right into the rainforest, which technically stretches from Southern Alaska to Northern California. Sitka spruce, bigleaf maples and red cedars surrounded me, with their dripping branches swathed in layers of deep green moss. Tall, lush ferns grow thick below the dense canopy. I passed relics of the 1800s homestead, wheeling over fir needles and packed dirt on most of the trail. 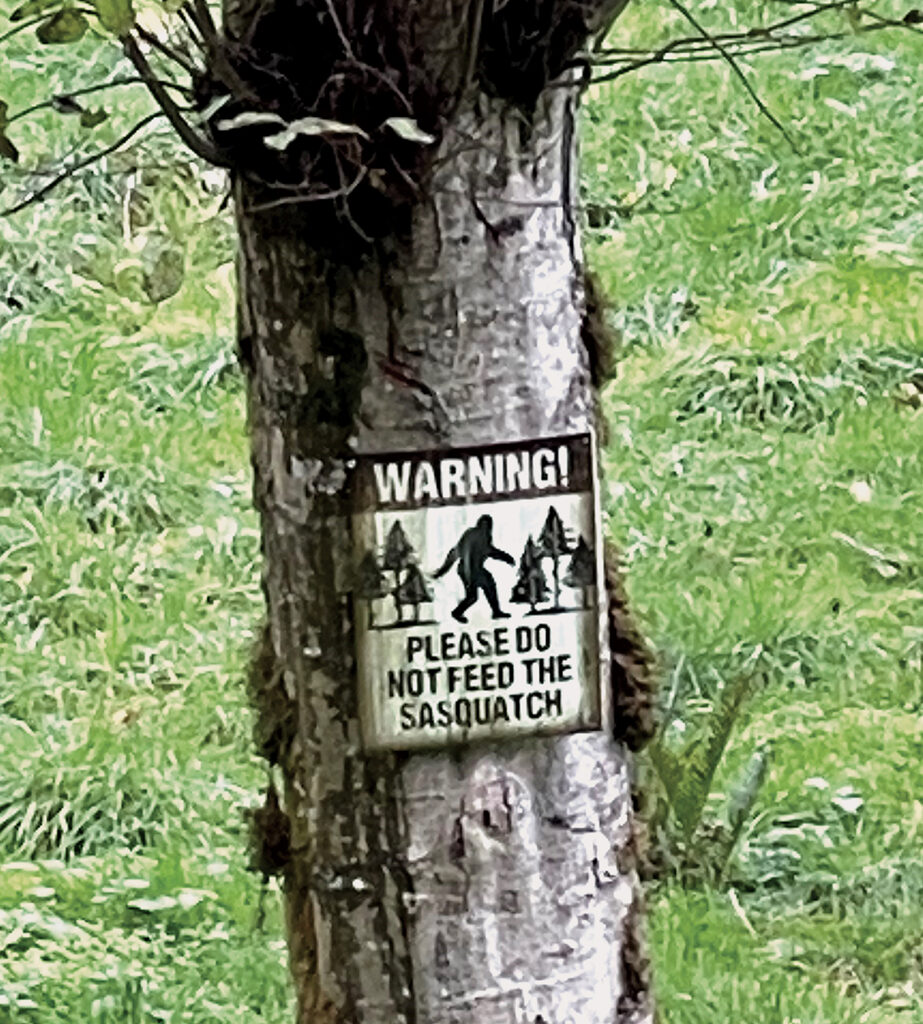 A short loop at July Creek picnic area offered serene views of Lake Quinault. I wheeled by crops of sword ferns and barely missed a Northwestern salamander resting on the path.

A short drive to the south side of Lake Quinault took me to the 1,000-year-old World’s Largest Sitka spruce. Nearby, the grand Lake Quinault Lodge demonstrates the rustic, natural construction that is a hallmark of Pacific Northwest style architecture, as does the quaint Quinault Mercantile across the street. Although Lake Quinault Lodge has ADA rooms ($150/night), I opted for the Lake Quinault Inn ($100/night) in nearby Amanda Park.

I continued northwest — using my GPS since cell coverage is spotty — following Highway 101 for 38 miles to Big Cedar Tree Kalaloch. This massive cedar is one of the oldest of the rainforest giants. Three miles north on Highway 101, Ruby Beach offered a picturesque view of the Pacific Ocean from atop a high cliff. A worthy scene of the stormy Pacific crashing into haystack rocks, plus accessible vaulted toilets, make this a convenient roadside stop.

Forks is a quiet little town famous for two things: wood and Twilight. The Forks Timber Museum chronicles the town’s rise to being dubbed the “Logging Capital of the World” in the 1970s. As that fame dissipated, the Twilight series only made Forks’ reputation burn brighter, depicting the town’s gloomy weather as the perfect home for brooding teenage vampires and werewolves. The props and costumes on display in the Forever Twilight Collections will interest some. It is wheelchair accessible, as is the first floor of the Forks Timber Museum and the surrounding area that holds many large wooden statues. But my focus was Rialto Beach, 14 miles west on WA-110.

A 25-foot wheelchair mat, available only in summer, provided access to the beach. I sat close enough for a great view of the gnarled, enormous downed Sitka spruce trees strewn along the sandy coast. It is sad that saltwater intrusion at the roots is killing these iconic rainforest trees. But it is oddly beautiful to see the enormous pieces of driftwood scattered for miles along the sand. I stayed one night at the Dew Drop Inn ($90/night). 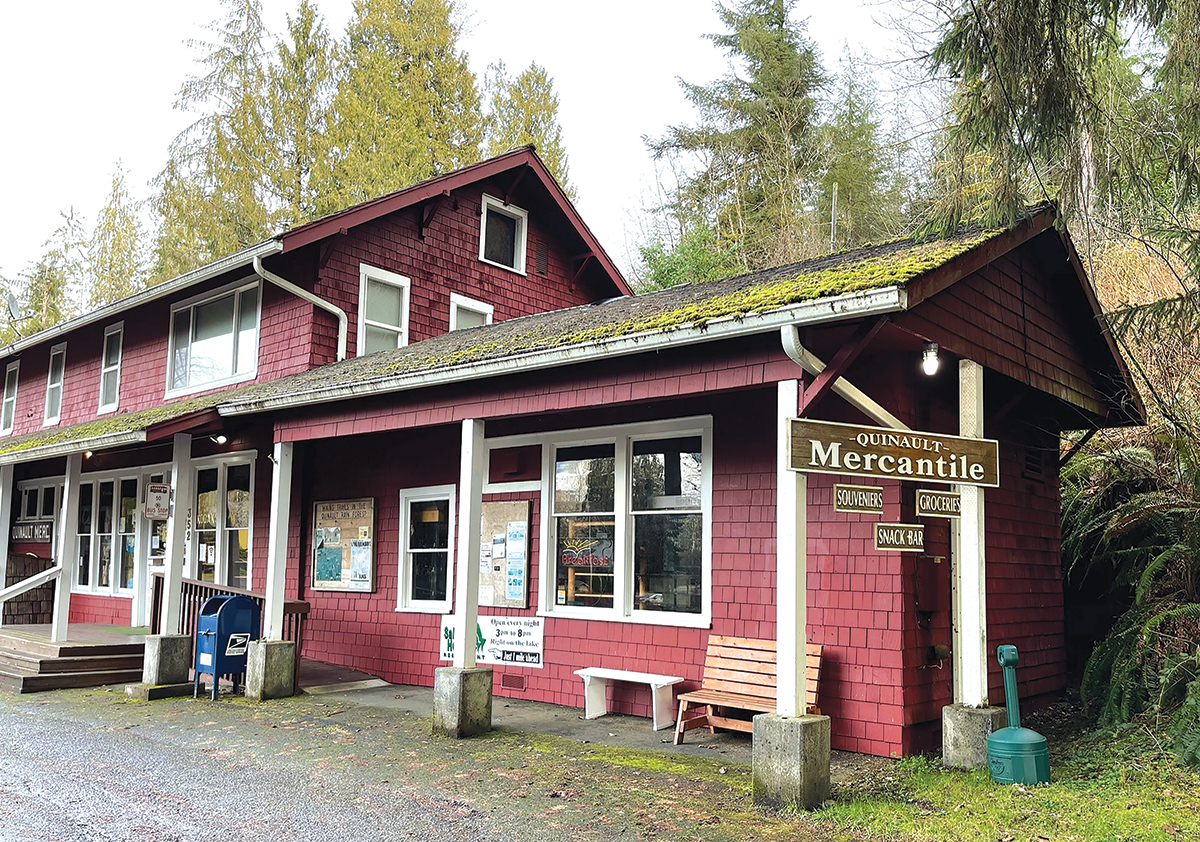 Woodsy cabins and lots of moss are the norm throughout the Pacific Northwest. Lilly Longshore. New Mobility

About 56 miles northeast on Highway 101 lies adventurous Port Angeles. It is the northern gateway to the Olympic National Park via Hurricane Ridge Road. The town offers a great waterfront with an active public pier where concerts and festivals — like Jazz in the Olympics and the Dungeness Crab and Seafood Festival — are hosted. I followed the waterfront walkway for miles, past artistic murals of town history and magnificent maritime views. I watched as Black Ball’s Coho Ferry took its passengers across the Salish Sea to Victoria, B.C.

Spectacular wheelchair accessible trails, many part of the 135-mile Olympic Discovery Trail, wind for miles through forests, past waterfalls and along lakeshores and rivers in this area. There is so much to do that I stayed for three nights. Over multiple visits, I have stayed at the Olympic Lodge ($149/night) but I prefer Super 8 ($80/night). It is comfortable, and Joshua’s Restaurant is a quick wheel across the parking lot for great food. 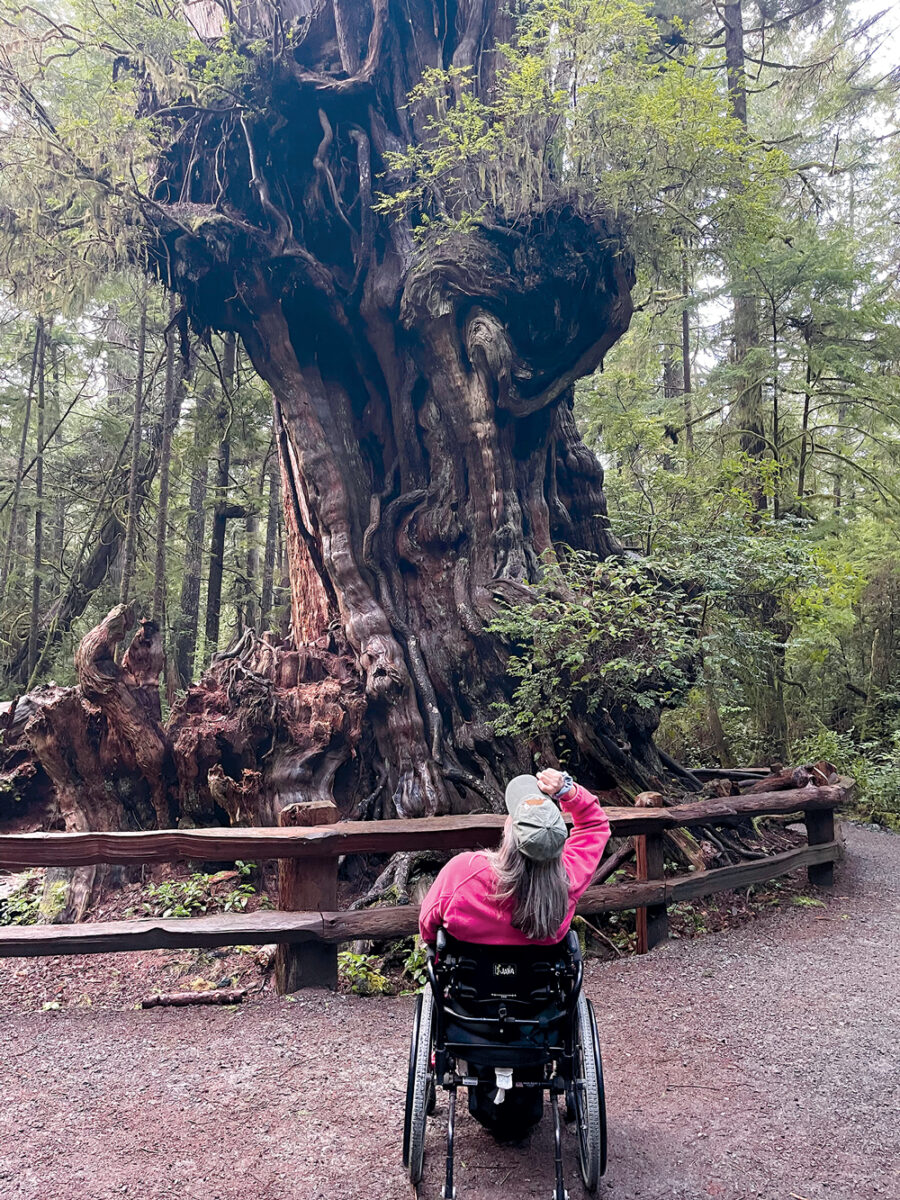 The Kalaloch Big Cedar Tree is roughly 1,000 years old and measures 175 feet tall, 19.8 feet in diameter, and 12,000 cubic feet in volume — making it the third largest of its species. Lilly Longshore. New Mobility

The Spruce Railroad, one of the best trails on the Peninsula (see Ian’s Favorite Trails, below), was originally constructed during World War I to transport spruce logs to the lumber mills for conversion to biplanes. Now it has been transformed into an outstanding 11-mile paved rail trail. This excellent trail goes through tunnels, dense rainforest, past waterfalls and along the edge of pristine Lake Crescent, offering stunning views of the glacial lake.

On the west central segment of the Olympic Discovery Trail, near the Elwa River, I crossed a double-decker bridge high above the unspoiled river, then followed the water for miles. It is worth mentioning that the largest dam removal project in U.S. history occurred on this river, recovering breeding grounds for all five species of Pacific salmon.

South of town, Hurricane Ridge visitor center sits near the summit of Mount Angeles. Best visited in summer after the snow is cleared, the visitor center has a gift shop, snack shop and a terrace with a gorgeous view of the Olympic range. Across the parking lot, a short trail to the Hurricane Ridge overlook offers a spectacular view across the Strait of Juan de Fuca and the Olympic mountains.

The charming town of Port Townsend is 47 miles east of Port Angeles on the north side of the Peninsula. Its lovely Victorian architecture truly makes this town unique. The town celebrates the Victorian Heritage Festival annually, as this is one of only three registered historic Victorian seaports in America (the other two are Cape May, New Jersey, and Galveston, Texas). The downtown is full of quaint shops and restaurants, and it hosts many wonderful arts and music festivals. 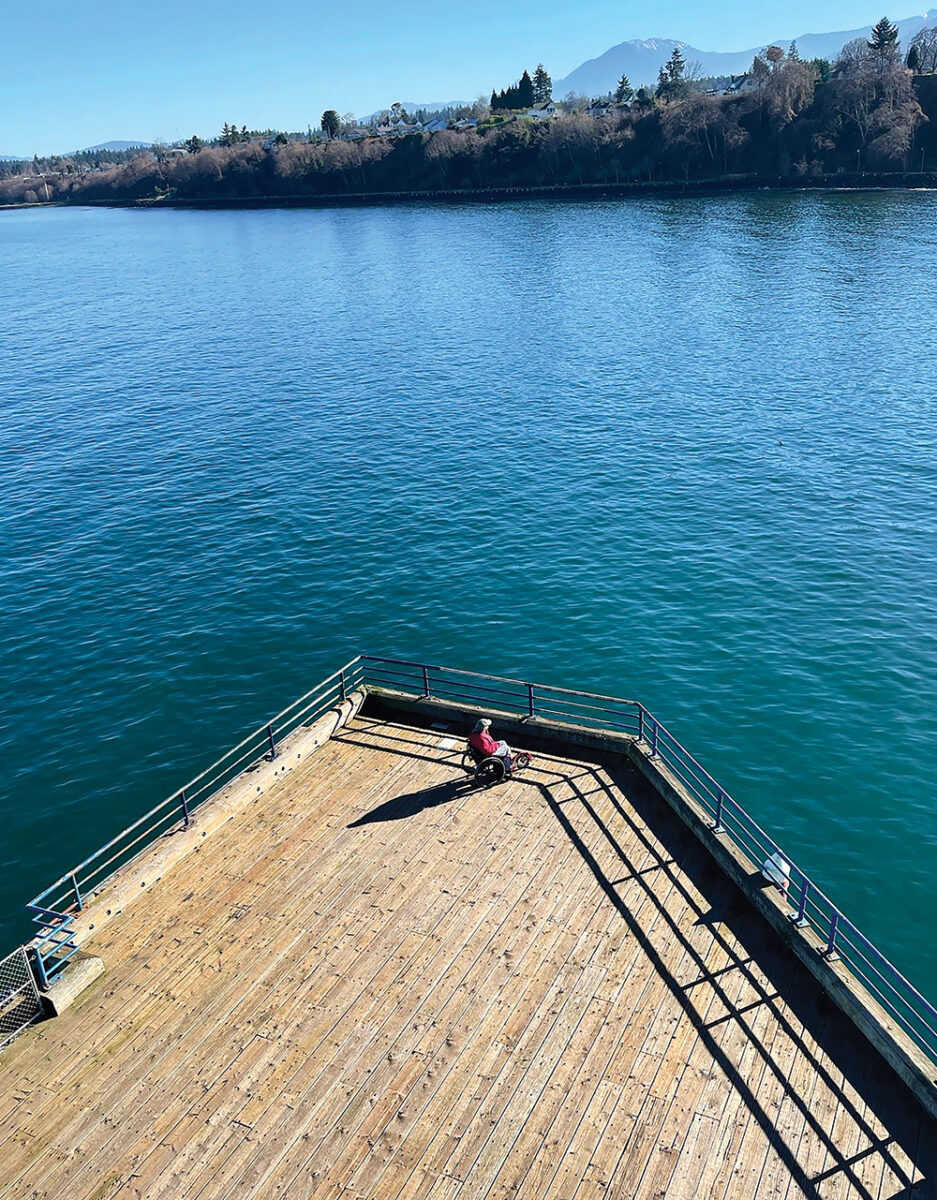 The pier at Port Angeles is a great place to bask in the PNW’s natural beauty. Lilly Longshore. New Mobility

Nearby Fort Worden State Park, part of a trio of armed garrisons known as the triangle of fire, showcases the historic military importance of this region. I wheeled to the top of the fort next to the cannons aimed across the Strait of Juan de Fuca and explored the still-intact concrete fort right from my wheelchair.

Many fine restaurants offer delicious fare here, but Anthony’s Bayview Restaurant is my favorite. The food and service are great, it has good accessibility, and it’s so close to the bay I’d have gotten wet if not for the protection from the windows. I watched the WSDOT ferry go to and from Whidbey Island from my table. For my two-night stay, I liked the Port Townsend Inn ($80/night).

I headed back to Olympia, taking Highway 101 south, along the scenic Hood Canal. Driving back, I reminisced over favorite outings — and started my to-do list for next time.

How restrictive baby equipment can hinder development
Health Canada approves Dysport to treat kids with cerebral palsy
Spaces should be better designed for people with disabilities, says Ross A...
Telemedicine broadening access to care for those with cerebral palsy
This coach turned his experience with disability into his life's work
What it's like to have a sister with special-needs, AKA Boo-Bear