I was a fanatical tennis player for decades until my increasingly painful arthritic knees forced me to stop playing. The knees were replaced two years later, but by then, I had filled in my life with other activities, including a daily three-mile walk and aerobic swim, and cycling for exercise and errands.

Now I also walk a puppy four times a day. I’ve made many new friends and, much to my surprise, I don’t miss tennis at all. 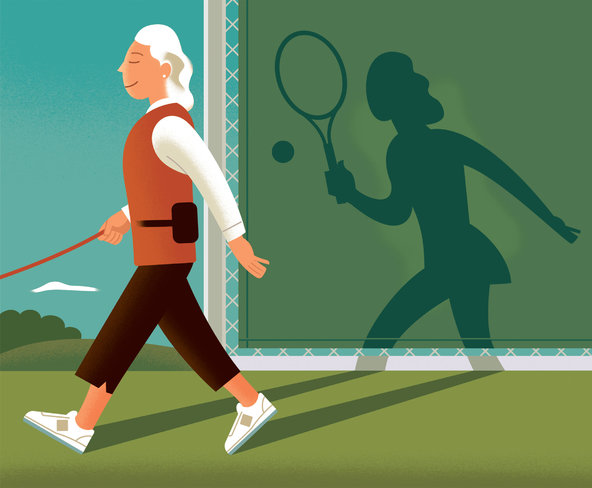 Osteoarthritis is something nearly all of us can expect to face if we live long enough. A quarter of the population has it, and the percentage is expected to rise significantly in the years ahead. Two-thirds of people with arthritis are younger than 65, the Centers for Disease Control and Prevention reports.

“Arthritis affects more than 52 million adults in the United States and is the most common cause of disability,” the C.D.C. states. Yet it often takes a back seat to other chronic ailments in treatment and public awareness.

When the pain of arthritis results in a decline in physical activity, as it commonly does, the risk of developing a chronic health problem like heart disease and Type 2 diabetes rises and performing the tasks of daily living becomes increasingly difficult.

The big question now is how the growing millions of adults with arthritis will cope with a painful, disabling and as yet incurable disease. Although several commonly affected joints — hips, shoulders, ankles, wrists and elbows as well as knees — can be replaced by artificial ones, not everyone affected is a candidate for surgery, and the operation itself leaves some people with activity limitations.

According to Patricia A. Parmelee, a professor of psychology and the director of the Alabama Research Institute on Aging, arthritic pain and disability often force people to abandon activities they love. “Some stop moving altogether, brood over what they had to give up and become depressed,” she said in an interview.

“The depression is not necessarily severe, but low-level depressive symptoms can interfere with daily functioning,” Dr. Parmelee said. “People tell us ‘I’m not functioning as well as I could,’ ‘Life isn’t as good as it could be.’ ”

The trick to not losing quality of life “is to find a substitute for the activities limited by arthritis,” she said. “Can’t play golf? Can’t garden? What can you do? Walk, swim, walk in water — anything that gets you moving. The bottom line: As we get older, if we don’t get up and move around as much as we can, then we soon won’t be able to move at all.”

In a 10-year study [2] of more than 2,000 men and women with arthritic knees,[3] Jungwha Lee and her colleagues found that fewer than 10 percent met the national guidelines of doing 150 minutes a week of moderate physical activity. But if they improved their physical activity, “they functioned better and had less disability,” said Dr. Lee, a biostatistician at Northwestern University Feinberg School of Medicine in Chicago.

In a second study [6] of 1,168 individuals ages 49 to 83 who had X-ray evidence of knee arthritis, participants monitored their daily activity with accelerometers that measured duration and intensity of activity.

The researchers found that, on average, participants spent two-thirds of their waking hours being sedentary. The less active they were in the course of the day (apart from any moderate or vigorous activity they did), the more slowly they walked and the less able they were to get up from a chair.

In a study [4] that Pamela A. Semanik, Dr. Lee and colleagues published last month in the American Journal of Public Health, the more time people with arthritis spent in sedentary behavior, the greater their loss of function over a period of two years. “They went from bad to worse,” she said in an interview.

“People control their pain by doing less physical activity,” Dr. Lee said. “But being more active can delay the functional decline that accompanies aging. Any activity is better than being sedentary.”

She added: “You don’t need a gym membership to promote good health. Build movement into your daily routine. Don’t park right next to the store. If your job involves prolonged sitting, set an alarm and stand up every 20 minutes. Use a remote printer. Take a lap around the floor after using the restroom. Go for a walk during lunch.”

Injury to joints is a major risk factor for developing arthritis, Philip G. Conaghan of the University of Leeds in England wrote in an email. “While these can be minimized to some extent in the workplace and sporting field, it’s impossible to stop all these. We can, however, control our weight, and that’s a major battle for all Western societies.”

Overweight and obesity place far greater stress on major joints like the hips and knees than they are designed to withstand for three score and 10 and then some. Even a 10 percent reduction in body weight can be beneficial.

So can muscle strengthening, Dr. Conaghan wrote. “If you are having difficulty getting out of chairs or walking up stairs, then you likely have weak muscles in your thighs. The sensation of the leg ‘giving way’ is mostly due to thigh muscle weakness. So strengthening leg muscles alone reduces knee pain from osteoarthritis.”

For a “starter exercise,” he recommended walking laps in a swimming pool. Then, with stronger muscles, he said, activity can be increased, say, by using an exercise bike or cross-trainer, to help maintain muscle strength and also burn extra calories if weight loss is needed.

When people fail to delay the progress of arthritis, a multicenter study that Dr. Conaghan directed showed, it is likely to progress from difficulty using stairs to pain while walking; then standing, lying or sitting; and finally while in bed. Elizabeth M.A. Hensor of the Leeds Institute of Rheumatic and Musculoskeletal Medicine was the lead author of the study,[1] published in January in Arthritis Care & Research.