Rotating the foot in or out during gait is associated with significant decreases in frontal plane knee load during early or late stance, respectively, and can be effective for reducing pain and potentially slowing the progression of disease in patients with knee osteoarthritis. 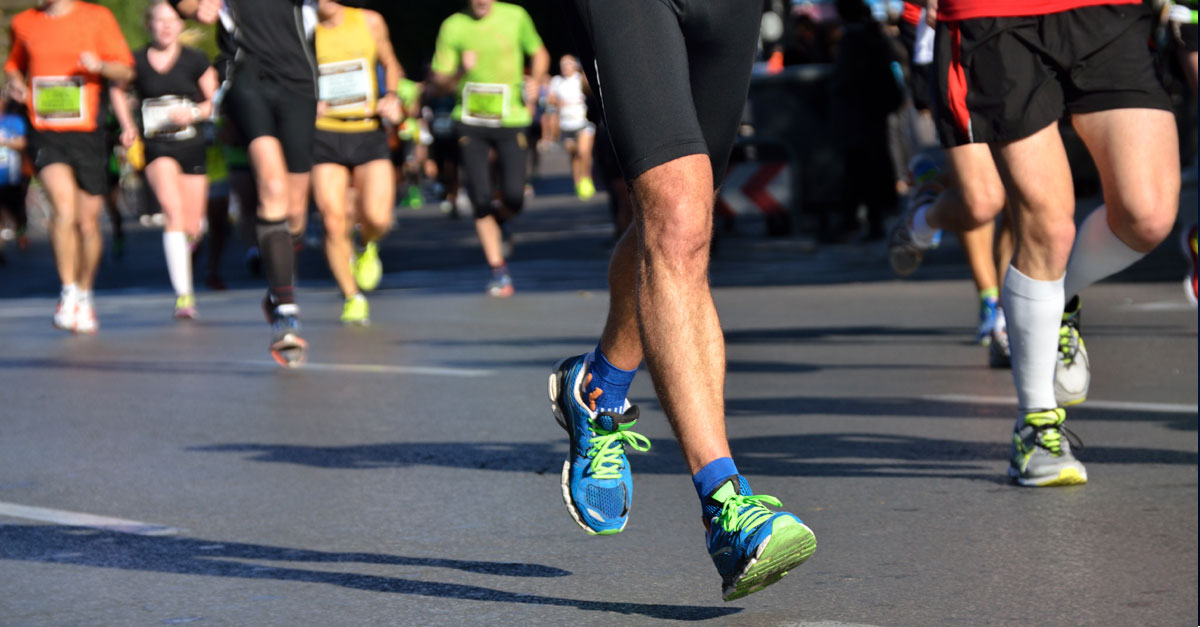 Why do I toe out when I run? Run Smart Online

Knee osteoarthritis (OA) has become an increasingly common musculoskeletal diagnosis in the US. Projections suggest that by the year 2030, approximately 25% of the US population will have knee OA.[1]

As knee OA progresses to the end stage of the continuum, a total knee replacement is often the final treatment option. However, nonsurgical means of slowing the progression of knee OA can help to prolong or avoid the costly, invasive, and painful surgery.

It’s been suggested that knee OA occurs as a result of many years of applied force, or loading, to the knee joint. This can happen through uneven force distribution within the joint compartments or movement at the joint to which the individual is unaccustomed; either can lead to excessive cartilage degeneration.[2]

The medial tibiofemoral compartment tends to be the most common site for OA occurrence, with an incidence ratio of 5:1 relative to the lateral compartment.[3] Medial knee OA is often linked to two biomechanical factors: an elevated external knee adduction moment (or internal knee abduction moment; KAM) during the stance phase of gait (Figure 1), and the occurrence of frontal plane shear force medial to the knee joint center during stance phase (Figure 2).[4,5] Both variables affect loading on individual compartments of the knee joint.

The KAM has been prospectively linked to development and progression of medial compartment knee OA.[6] As the KAM value increases, loading on the medial compartment of the knee joint increases,[2] increasing wear on the cartilage. Research has shown individuals with medial knee OA have higher KAM values late in the gait cycle than asymptomatic healthy controls.[6]  In vitro studies have found knee joint cartilage deteriorates at a faster rate under shear stress than under pure compressive loading, and this shear stress is also linked to development and progression of knee OA.[6] Medially directed shear force causes wear on the medial compartment, making it an important component to control or minimize in patients with evidence of medial knee OA. 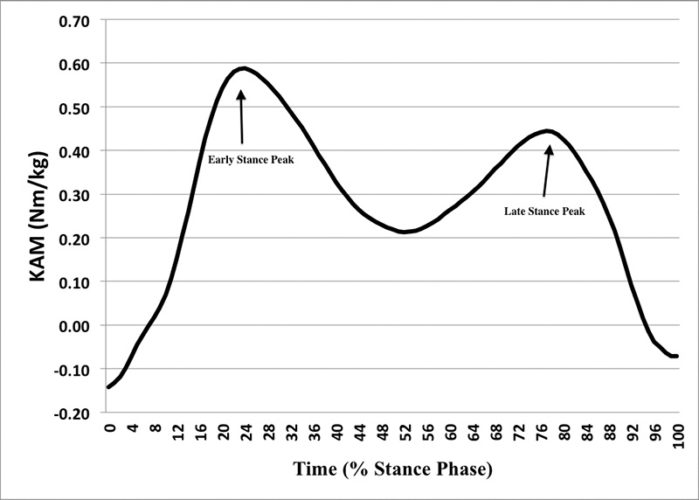 Foot rotation interventions are some of the more commonly studied and used methods of attempting to slow knee OA progression. One reason is the natural occurrence for people in general of foot rotation during gait. Foot rotation is seen as a natural compensatory mechanism to help alleviate pain and slow disease progression. Individuals with medial knee OA have been shown to rotate their feet externally during gait as a means of unloading the affected compartment,[9] which has led to investigations of both external and internal foot rotation interventions. This rotation may offload the medial compartment by reducing KAM [10] and lateral-medial shear force.[2]

As activities increase in complexity and physical demand (stair climbing vs walking, for example), associated joint moments and forces tend to increase, potentially leading to further cartilage degeneration in patients with knee OA.

With the onset of painful knee OA, individuals may bypass certain activities as a means of avoiding pain. This can adversely affect quality of life in these individuals; those who enjoyed hiking with loved ones miss those experiences, for example, while others may choose to restrict their living space if negotiating stairs is too painful to access floors of their home. Similar experiences may occur in individuals who do not have pain; if they have been advised that certain movements put their cartilage at risk, they may proactively compensate to avoid the potential future pain.

Reduced activity levels can have additional consequences, such as weight gain, increased cholesterol, and other adverse physiological effects. Issues such as weight gain can make OA worse, as it places increased force onto already damaged cartilage, likely speeding up the wearing away of remaining tissue.

Ultimately, the best clinical option is an intervention that allows for continued activity (and thus maintenance or improvement of quality of life, depending on the presence of pain or discomfort) while reducing wear on the cartilage. This strategy can delay an end-stage knee OA diagnosis and the need for a total knee replacement.

Loading of the medial or lateral tibiofemoral compartments of the knee joint is a product of both the frontal plane position of the knee joint in relation to the center of pressure of the foot, the varus/valgus or abduction/adduction orientation of the knee, and the weight/ force applied to the knee joint. Research has found increased frontal plane knee loads in individuals with medial knee OA are associated with greater varus/adduction of the knee during walking, and not greater external forces.[11] Researchers have investigated the effects of gait modifications such as changes in the foot rotation angle on frontal plane knee loads.[12] Changing foot rotation angle can align the knee center in a more neutral position, reducing the frontal plane moment arm,[8] which should in turn reduce abnormal knee loads. Foot rotation gait modifications also have been associated with reduced pain in people with medial knee OA.[2,6,13,14]

Two different foot rotation gait strategies exist to combat abnormal knee loading: increasing either the toe-out angle or toe-in angle. Both foot rotation modifications are made in relation to the forward progression of the body. While both foot rotation strategies can reduce frontal plane knee loads, each stra2tegy affects knee loading at a different time point during the stance phase of gait. Toeing-out predominantly affects knee loads in late stance,[2,12,13,15] while toeing-in affects knee loads during early stance.[8,16,17] Because it is not possible to combine both gait strategies during stance phase, it is important to examine the effects of each strategy independently and discern which is most effective for a given patient or population.

An increased toe-out gait is commonly seen in the knee OA population,[15] possibly as an adaptation to medial knee loading. Experimentally, increased toeing-out has been associated with reduced knee loading in the latter half of stance during level walking,[2,6,13,16 ] running,[18] and stair ascent [13] in both healthy and knee OA populations. Within the current literature, toe-out gait modification studies have assessed foot progression angles of 10°, 20°, 30°, and 40° in both healthy individuals and those with knee OA. In general, the reductions in late stance knee loads seen during level walking increase progressively with increasing toe-out angles.[16]

Similar effects are associated with self-selected toe-out gait in patients with knee OA. Increasing foot angles beyond a self-selected degree of toe-out further reduces frontal plane knee loading and lateral-medial shear force.[6,13] There is likely a point of diminishing returns, however. Certain toe-out angles would seem to be impractical (90°, for example) and unlikely to be maintainable for any significant time. The idea is to find the maximum benefit, which the individual who already rotates their foot may or may not have found, depending on their chosen level of rotation.

Although toe-out has been quite successful in reducing knee loads during late stance, an adverse effect has been observed earlier in stance. Reductions of late stance knee loads associated with increased toe-out angle have been accompanied by increases in early stance phase frontal plane knee loading in some studies,[13,16] though not all.[19] Early stance phase knee loads are generally larger in magnitude than those associated with late stance, and have garnered much attention. Therefore, increased toe-out gait strategies may be a viable option for individuals with increased frontal plane knee loads during the latter half of stance, but should be monitored for their effects on loading during early stance. 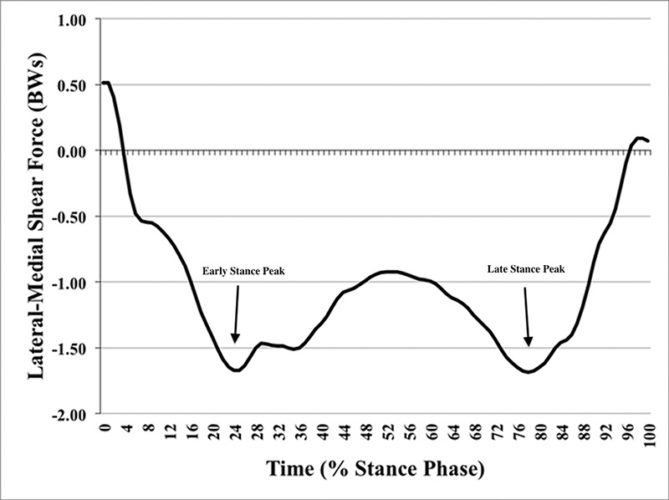 Experimental toe-in angles have ranged from 5° to 10° (relative to neutral), as well as “maximum comfortable” internal rotation. When instructed to comfortably internally rotate the foot during level running, healthy participants reduced foot rotation angles from their natural alignment of about 11° of toe-out to a more neutral foot progression angle (0°). The change in foot angle during running was associated with a 9% reduction in frontal plane knee loading.[18]

An interesting result of both toe-out and toe-in gait modifications is the apparent transfer of frontal plane knee loads to the sagittal plane. Several studies have found increases in peak early stance internal knee extension loads associated with both toe-out [19,24] and toe-in [16,20] interventions during level walking. However, one study found that a toe-out gait was associated with lower peak knee extension moments than normal walking.[16] Knee off-loading in the sagittal plane has been postulated as a mechanism to reduce compression loads and pain in individuals with knee OA;[25,26] therefore, increases in sagittal plane loads using modified foot progression angles could increase pain in some individuals. Due to the possibility of load transfer from the frontal plane to the sagittal plane, toe-out and toe-in gait strategies should be monitored for increasing knee loads in other planes.

Ultimately, in choosing whether to use foot rotation as a treatment intervention, practitioners must evaluate individual patient’s goals. As discussed, sometimes the first loading peak is reduced and sometimes the second peak is reduced, depending on the intervention chosen. Each individual’s movement profile should be evaluated whenever possible to determine which peak is likely to be most detrimental.

A thorough analysis (including motion analysis) is ideal, but in reality is not always an option for clinicians. If a high-tech movement analysis system is unavailable, it may be a matter of trial and error with the different rotational interventions to see which one decreases pain and allows for increased movement. It should be noted, however, that a decrease in pain is not always associated with a change in mechanics and therefore does not necessarily indicate a slowing of knee OA progression.

It may look and feel odd at first, but walking “like a duck” may have long-term benefits for slowing knee OA progression, and thus delaying a potential need for a total knee replacement.


Also see
Why Do I Toe Out When I Run? in Run Smart Online