This ligament complex would explain chronic pain after an ankle sprain. 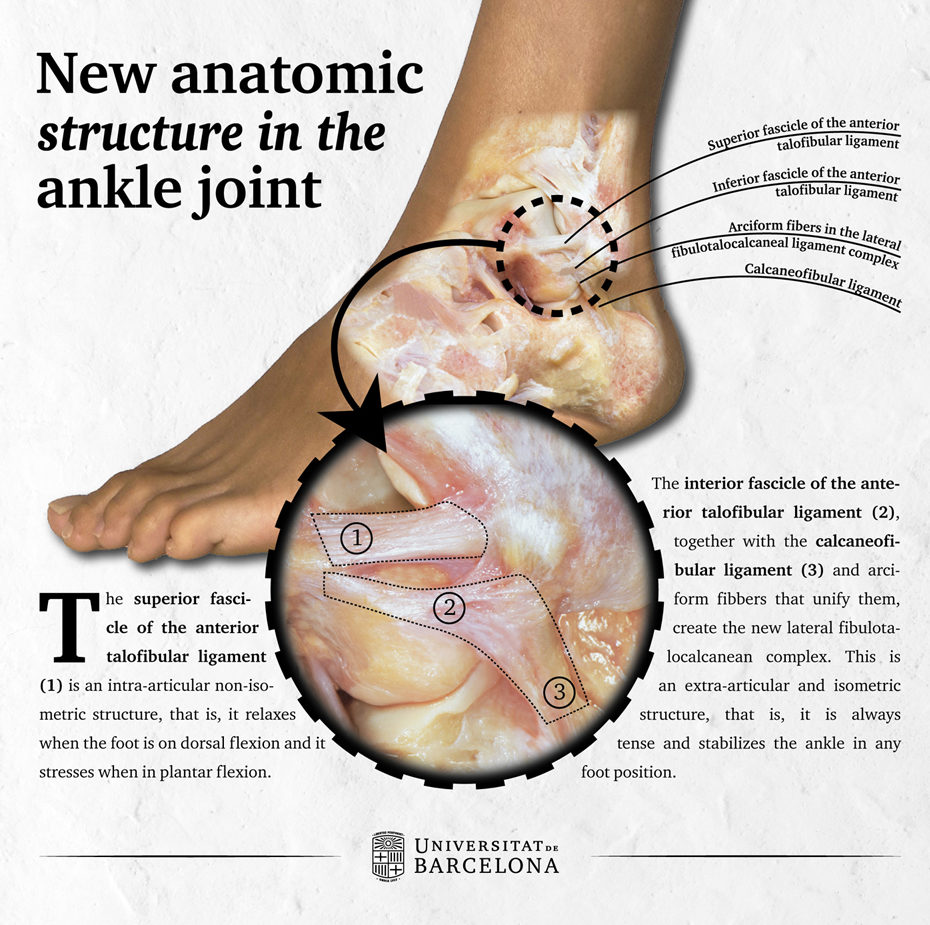 In this new scientific study, the UB research team defined a new anatomic structure in the ankle, the lateral fibulotalocalcaneal ligament complex (LFTCL). Describing this anatomic structure is now possible thanks to the analysis of fibers that link two of the lateral collateral ligament compounds. Also, for the first time, they describe one of the parts in this new structure as intra-articular. These results, published in the scientific journal Knee Surgery, Sports Traumatology, Arthroscopy, change the understanding of this joint and could explain why many ankle injuries produce chronic pain.

The team who worked on this discovery is specialized on the anatomy of the musculoskeletal system, formed by staff from the Faculty of Medicine and Health Sciences of the UB Jordi Vega, Francesc Malagelada, M Cristina Manzanares and Miquel Dalmau Pastor. Researchers from the UB, Cristina Manzanares and Miquel Dalmau. University of Barcelona

Ankle lateral ligaments are the ones that receive more injuries in the human body, especially due ankle sprains. Moreover, many people who suffer from this injury complain about pain in the ankle which lingers and they are bond to get another sprain –which has not been explained in medicine yet.

“This lack of explanation was the key to change the way to tackle ligament dissection in the dissection room and we saw linking fibers between ligaments were usually removed because they were not associated with the ligament,” says Miquel Dalmau Pastor, researcher from the Human Embryology and Anatomy Unit, and the Department of Pathology and Experimental Therapeutics of the UB.

According to the new study, these fibers link the inferior fascicle (set of ligamentous fibers) in the anterior talofibular ligament and the calcaneofibular ligament, two out of the three components in the lateral collateral ligament. “This connection was never described, and contrary to what was thought, it suggests that both ligaments are a functional unit. That is, we could consider these two connected ligaments as an anatomic structure we call lateral fibulotalocalcaneal ligament complex,” says Dalmau Pastor.

The careful dissection of the articular capsule in the ankle enabled researchers identify the intra-articular compound in the anterior talofibular ligament. According to the study, this ligament would be built by two fascicles, the superior and inferior one, where the superior fascicle lies within the joint and the inferior one is outside. This inferior fascicle, together with the calcaneofibular ligament and fibers would form the fibulotalocalcaneal lateral complex, which would then be an extra-articular structure.

Describing that part of the anterior talofibular ligament is an intra-articular structure could have implications in the evolution and treatment of this kind of injuries. “These findings suggest the behaviour after an injury will be similar to the other intra-articular ligaments, such as the twill, which are not able to cicatrize, and this makes the joint to remain unstable and in many cases it requires a surgical operation,” says Miquel Dalmau-Pastor.

These results would explain why many sprains cause pain after the patient follows the treatment the doctor suggests. “Since the intra-articular ligament does not cicatrize, the instability of the joint produces pain so these patients are likely to suffer from another sprain and develop other injuries in the ankle,, highlights Francesc Malagelada.

Apart from the anatomic observation in the dissections carried out at the University of Barcelona, the researchers studied the behaviour of ligaments. “The superior fascicle in the anterior talofibular ligament, apart from being intra-articular, is not an isometric structure — that is, it relaxes when the foot is on a dorsal flexion, and it tenses when it is on a plantar flexion. However, the inferior fascicle, the arciform fibers and the calcaneofibular ligament, the described ligament complex, are extra-articular structures and are isometric, so that they are always taut,” concludes Maria Cristina Manzanares.

I’m the first quadriplegic person to regain thought-control of my arm
Infrared thermography, a support tool for orthopedic diagnosis
Innovative approach to improve walking in children with CP
FES and AFOs for foot drop: linking domains of patient experience
FIFA 11+ Exercise sheet
The cure for osteoarthritis