The burning in his kneecaps was what Richard Bedard noticed first. Then came the tenderness and pain. Sitting for 10 hours a day as a financial editor in Hong Kong was agonizing. So was walking short distances or just standing in the elevator. 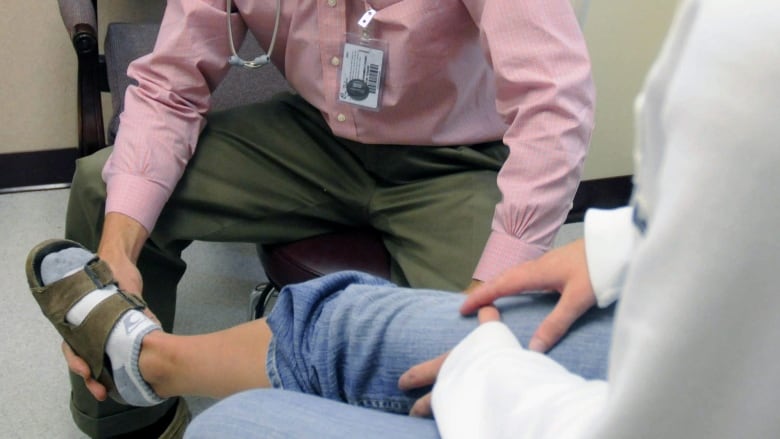 Six million Canadians suffer from arthritis, but that number could climb to nine million by 2040, according to the Arthritis Society. Mike Yoder, The Lawrence Journal-World/AP. CBC Health

Neither doctors nor physical therapists could offer any lasting relief. Surgery loomed. But Bedard tried a different approach: a personal experiment to try to repair the cartilage in his knees with special exercises. It wasn’t easy and it took more than a year to accomplish, but he sidestepped a knee operation.

Now, 10 years later, Bedard, 57, runs around with his young kids, climbs stairs and bikes up to 60 miles on weekends, all without pain. “It was, all and all, a lengthy process,” said Bedard, who has written an e-book about his successful effort to fix his knees without surgery. These days, he added, “I still notice some burning in my knees when sitting,” but for the most part, “my knees feel really good.”

Studies suggest about 1 in 4 adults [1] suffer from chronic knee pain. The number of sore, swollen and stiff knees has risen 65 percent [1] in the past four decades and the increase can’t be explained by aging or obesity alone, according to the National Health and Nutrition Examination Surveys and the Framingham Osteoarthritis study.[1]

Knee pain is mostly caused by osteoarthritis, a chronic condition that afflicts an estimated 30 million Americans of all ages. It is the most common form of arthritis and is caused when the cartilage, which cushions joints, becomes injured and worn, resulting in pain, swelling and stiffness.

Cartilage is the cushion that enables joints to move. But it has no pain receptors, so injuries go unnoticed until much of the cartilage has worn away and the joint is damaged. When the knee cartilage is gone and the joint pain severe — known as stage four or end-stage knee disease — the treatment options are painkillers and total knee replacement, the most commonly performed ­inpatient surgical procedure [2] for people 45 and older in the United States.

About 680,000 total knee replacements were performed in 2014, according to the National Inpatient Sample, a government survey of hospital patients. Knee replacement surgery outstrips the 500,000 coronary artery bypass surgeries performed yearly. If trends continue, estimates are that nearly 1.3 million Americans will undergo knee replacement by 2030.

While artificial knees can rid recipients of chronic pain and improve quality of life, research suggest that pain persists in as many as 20 percent of knee replacement patients.

The procedure costs an estimated $15,000 to perform, requires general anesthesia and an average of three to four days of hospitalization, followed by months of physical therapy. Potential risks [3] of knee replacement surgery range from infection to blood clots.

Chronic pain often subsides after recovery from a total knee replacement, but full range of motion often is not restored. The range of motion that you “have going into surgery with is what you will come out with,” said Elizabeth Matzkin, an orthopedic surgeon at Brigham and Women’s Hospital in Boston, and a spokeswoman for the American Academy of Orthopaedic Surgeons. “Knee replacement is done for pain relief, not necessarily to improve range of motion.”

Which is why experts say there is strong interest in nonsurgical alternatives to cut joint pain and provide more mobility and a better quality of life.

The first line of treatment for osteoarthritis includes the basics: strengthen leg, hip and core muscles, engage in low-impact aerobic exercise and neuromuscular education, according to evidence-based guidelines issued by the American Academy of Orthopaedic Surgeons in 2013.[5]

Weight loss can also help, especially for those who are fairly overweight or obese. Every pound shed eliminates four to six pounds of pressure on the knees, according to the AAOS.[4,5]

Medications, from nonprescription ibuprofen to powerful prescription drugs, can help counter joint pain by reducing inflammation. But long-term use of these medications also comes with potential serious side effects, including the risk of stomach bleeding.

“But it takes time and effort,” Matzkin says, “and a lot of patients are looking for a quick fix.”

This is why many other treatments are now available and are often advertised for knee relief. They include acupuncture, external braces, dietary supplements glucosamine and chondroitin sulfate, needle lavage, injections of growth factor, stem cells or hyaluronic acid, arthroscopy to repair meniscus tears, use of acetaminophen, steroid injections, opioid drugs and pain patches.

Yet, in its 2013 guidelines, the AAOS either recommended against all of these treatments or found inconclusive evidence [5] that they work.

“There wasn’t enough evidence to demonstrate that they are efficacious,” says Matzkin who served on the AAOS committee that wrote the guidelines.

Most of these widely used treatments fail to address the underlying problems of cartilage loss and joint repair, says Matzkin, noting that “once the cartilage is damaged and worn down you can treat the symptoms, but you can’t really make [osteoarthritis] go away.”

Since cartilage cells don’t have their own blood supply, it has long been thought that these cells could not regrow. But some research suggests that may be wrong.

Among the evidence showing that cartilage can heal is a 2006 study [6] of 325 people, average age 45. In the two-year study, which simply followed the natural history of these patients, 37 percent of participants showed improvements in cartilage as measured by MRI, compared with 33 percent whose cartilage worsened.

What separated those who improved from those who didn’t? Men, younger adults, those with thicker knee cartilage and people who shed more pounds between the first knee measurement and the second two years later were more likely to show improvements in cartilage. Those who were less likely to experience natural repair of their knee cartilage were women, older adults, people who started with thinner cartilage and those who didn’t lose weight during the two years between the first MRI and the second.

In October, Duke University reported new evidence [7] showing that cartilage in human hips, knees and ankles can regenerate on its own — in the lab, anyway.

“These new findings suggest a potential “for regeneration that might be exploited to enhance joint repair and establish a basis for human limb regeneration,” the team reports [7] in the journal Science Advances.

The challenge is that cartilage repair takes a lot of time, since the only way cartilage cells are nourished is by being bathed in joint fluid.

“Cartilage has no direct blood supply, so its ability to use energy to repair itself is very, very slow,” says Austin physical therapist Doug Kelsey, who has written The 90 Day Knee Arthritis Remedy. “So, consequently, it takes a lot of time, a lot of [knee exercise] repetitions and persistence.”

Finding the “sweet spot” for injured knees can also be tricky and varies widely from person to person. It takes just the right amount of movement and weight-bearing pressure to bathe the cartilage cells in joint fluid, allowing them to be nourished and recover without causing more joint damage. It means gently moving joints that may be stiff, swollen and painful.

Bad knees run in my family, but I still never thought they would sideline me. I used to sit cross-legged with ease. Kneeling was something I didn’t think about.

Then when I turned 60, my knees starting “talking” to me.

First, there was burning and discomfort during long flights sitting in cramped economy seats. Stairs began to give me pause. Even curbs were sometimes painful.

So began my knee odyssey, which has been marked by physical therapy, X-rays and MRIs, multiple doctors, a pricey brace so difficult to put on that it is unused, lots of nonsteroidal anti-inflammatory medications, numerous ice packs, cortisone shots in both knees, various dietary supplements, topical ointments, and one foldable cane.

The low point came when one of my knees blew up like a balloon, requiring fluid to be removed with a long needle and no anesthesia. That was followed by nearly a week of sleepless nights because of a knee that felt like it was on fire.

If I could have removed my kneecap, I would have done it in a heartbeat.

During those sleepless nights, I ran across Richard Bedard’s e-book, Saving My Knees: How I Proved My Doctors Wrong and Beat Chronic Knee Pain, which gave me hope that invasive procedures didn’t have to be in my future. It introduced me to physical therapist Doug Kelsey and his book: The 90 Day Knee Arthritis Remedy. I’ve read and reread both books and shared what they recommended with my physical therapist and physician. Neither objected to my trying Kelsey’s program.

I’ve also trimmed a few pounds and plan to lose more, taken up yoga, and bought a device that keeps my legs moving under my desk.

Are my knees better? Yes, an improvement measured by my physical therapist and how the foldable cane is gathering dust. But if I slip off the program, I soon pay the price with stiffer knees, less flexibility and more pain.

My hope is that, like Bedard, I can bring my knees back to better health and sidestep future invasive procedures.

But I also know that knee improvement will happen slowly on cartilage time — not my timetable — and that it will be critical to listen closely to my knees so as not to cause any more damage to precious cartilage or joints.