Five years of high-intensity interval training increased quality of life, improved fitness and might very well have extended the lives of participants in the Generation 100 study. 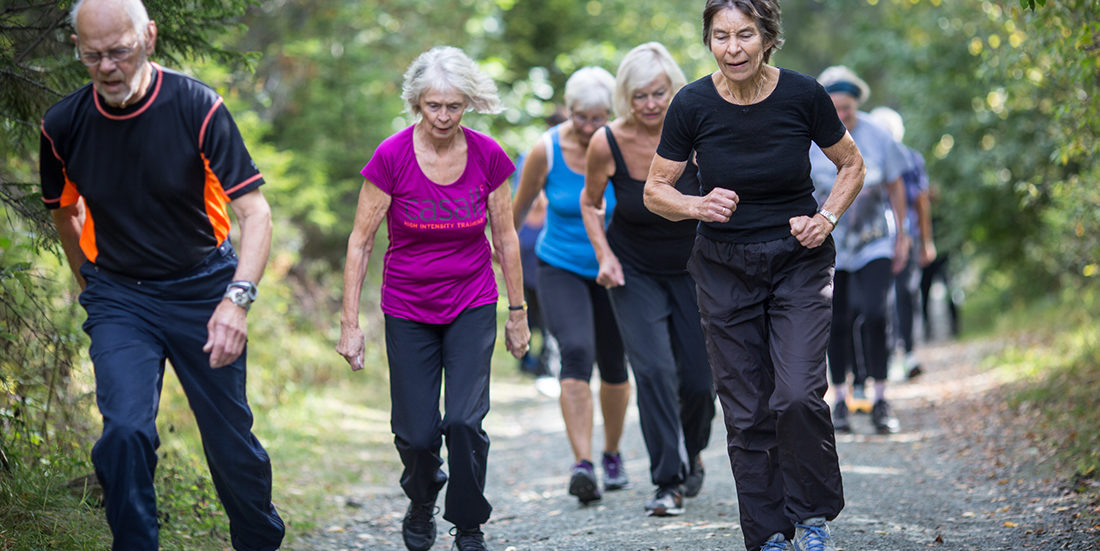 High intensity interval training is really hard work, if it’s done correctly. But research shows that the effort pays off when it comes to your health. Erlend Lånke Solbu/NRK photo

“First of all, I have to say that exercise in general seems to be good for the health of the elderly. And our study results show that on top of that, training regularly at high intensity has an extra positive effect,” says Dorthe Stensvold.

Stensvold is a professor in the Cardiac Exercise Research Group at Norwegian University of Science and Technology, NTNU and has been looking forward to telling us the results from the Generation 100 study for a while now. Researchers, healthcare professionals and individuals around the world have been waiting for answers to the question:

Generation 100 is the first major study that can tell us that, and Stensvold has encouraging news.

The study results have been published in the leading medical journal The BMJ. The animated video below summarizes the main findings.

The Generation 100 study is a cause-and-effect study. This means that all participants were divided completely randomly into three different training groups when the study started in 2012.

One group was assigned to do high-intensity training intervals according to the 4×4 method twice a week, while group two was instructed to train at a steady, moderate intensity for 50 minutes two days a week. The participants could choose whether they wanted to train on their own or participate in group training with instructors.

The third group – the control group – was advised to exercise according to the Norwegian health authorities’ recommendations. This group was not offered organized training under the auspices of Generation 100, but was called in for regular health checks and fitness assessments.

“Both physical and mental quality of life were better in the high-intensity group after five years than in the other two groups. High-intensity interval training also had the greatest positive effect on fitness,” says Stensvold.

But does this kind of exercise prolong life to a greater extent than moderate exercise?

“In the interval training group, 3% of the participants had died after five years. The percentage was 6% in the moderate group. The difference is not statistically significant, but the trend is so clear that we believe the results give good reason to recommend high-intensity training for the elderly,” says Stensvold.

The video below provides instructions for the 4×4 method that the participants in the high-intensity group followed in the Generation 100 study.

Among the participants in the control group, 4.5% had died after five years.

This could also explain why they ended up in between the other two groups in terms of survival.

“You could say that this is a disadvantage, as far as the research goes. But it may tell us that an annual fitness and health check is all that’s needed to motivate older people to become more physically active. In that case, it’s really good news,” says Stensvold.

As to the question of whether this study offers definitive proof that exercise prolongs life, Stensvold says, “I’d like to answer with a clear and unequivocal yes, because we believe that this is true. But training is probably not the only reason why so few of the Generation 100 participants died compared to what’s expected in this age group.

The people who signed up to participate in Generation 100 probably had high training motivation to begin with. They also started with a relatively high level of activity, and most of them considered themselves to be in good health.

Stensvold points out that the participants in all three of the Generation 100 study groups managed to maintain their fitness levels throughout the five-year period. That’s quite unique for people in this age group, according to physician and PhD candidate Jon Magne Letnes.

“Normally we see a drop in fitness of 20% over a ten-year period for people in their 70s. The fact that the participants in Generation 100 have managed to maintain their strong fitness levels from start to finish indicates that all three groups were more physically active than is usual for this age group,” he says. 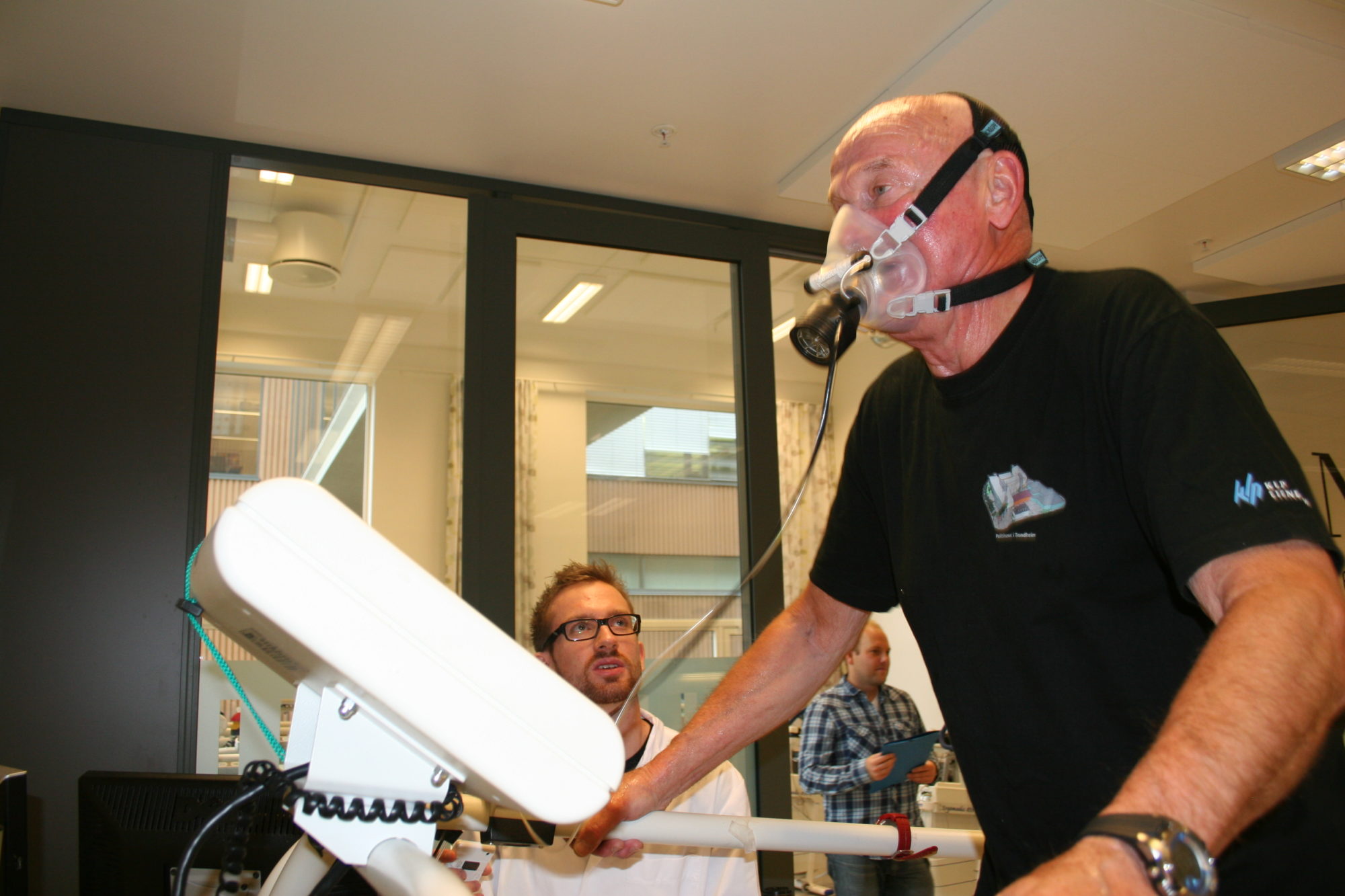 One of the earliest volunteers in the Generation 100 study, Sverre Kirksæther, runs on a treadmill so that Øyvind Eian, a master’s student in exercise physiology, can measure his maximal oxygen uptake, or VO2max. Nancy Bazilchuk/NTNU Photo

Letnes, who like Stensvold is affiliated with CERG at NTNU, refers to his own study which was published two weeks ago. It contains information on 1500 healthy men and women who tested their fitness level twice, at ten years apart, in connection with the Nord-Trøndelag Health Study – (Hunt3).

“We found that age has the least effect on fitness level for people who exercise regularly at high intensity. This group had a drop in fitness of 5% over ten years. By comparison, fitness levels dropped by 9% individuals who exercised regularly but not at high intensity. Those who were physically inactive lost as much as 16% of their physical conditioning over ten years,” says Letnes.

The decline in fitness was greater among the elderly than in younger people. Those who maintained their conditioning best also had the healthiest status when it came to risk factors for lifestyle diseases and poor health.

“Blood pressure, waist measurement, cholesterol and resting heart rate increased less in people who maintained their conditioning than in those who had a larger drop in fitness figures,” Letnes says.

Stensvold believes that the results from Letnes’ research support the most important findings in the Generation 100 study.

“In Generation 100, the high-intensity training increased participants’ conditioning the most after the first, third and fifth years. We know that better fitness is closely linked to lower risk of premature death, so this improvement may explain why the high-intensity group apparently had the best survival rate,” she says. 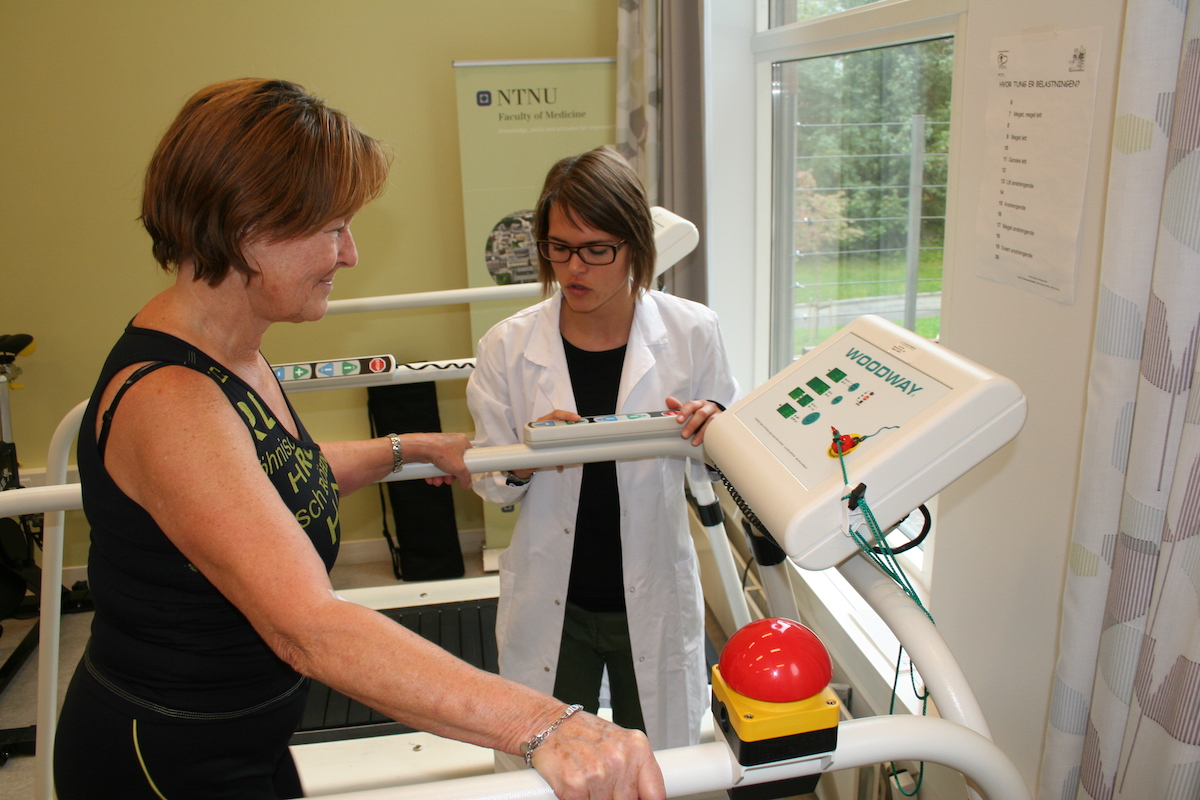 Generation 100 participant Aud Hepsø Johansson prepares to run on a treadmill as part of the testing procedure. Nancy Bazilchuk/NTNU Photo

She concludes by saying, “By high intensity we mean training that gets you really sweaty and out of breath. Now our hope is that the national recommendations for physical activity will be modified to encourage older people even more strongly to do high intensity training – either as their only form of exercise or to supplement more moderate training.”