Gravel roads crunching under tires; chirping birds overhead silencing the highway hum; and a dozen well-groomed horses, manes braided, picking at their nets of hay –­ those are the sights and sounds that greet stressed-out health-care workers arriving at A Horse Tale Rescue, AHT, in Hudson, Québec. 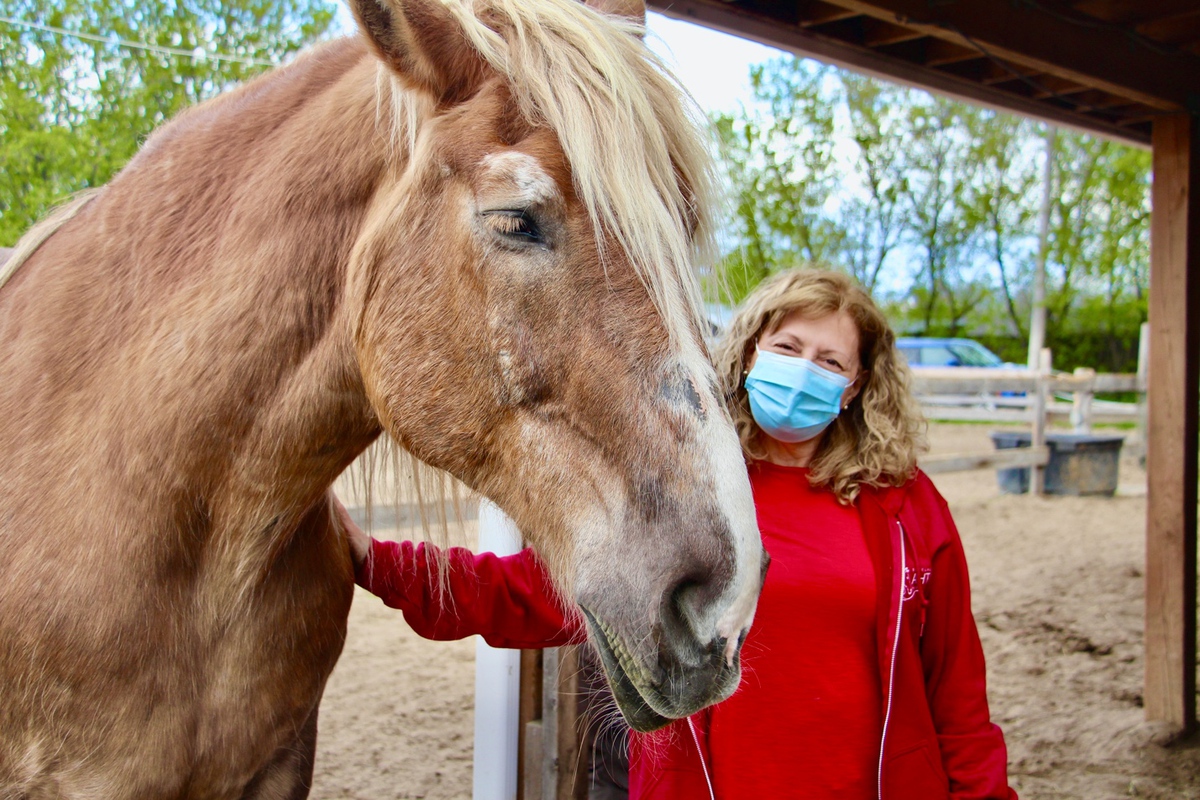 Since November 2020, Max Magnifico has frequented the rescue, located about 45 minutes from downtown Montréal, almost every Saturday.

Magnifico works as a front-line worker at Montréal’s Glen, Royal Victoria and Children’s Hospital as a housekeeper. He is one of the 28 front-line workers who has attended the AHT’s Equine Experience program since the start of the pandemic.

He says the experience has lessened the pandemic-induced stress and anxiety.

“As soon as I leave to go back home, I always feel that burden just lifted off,” says Magnifico. “Just working in a hospital is stressful… A hospital environment is not always helpful for the soul and the fact that I get to go somewhere where you’re in the middle of nature and it’s just horses around you, there’s something about it.” 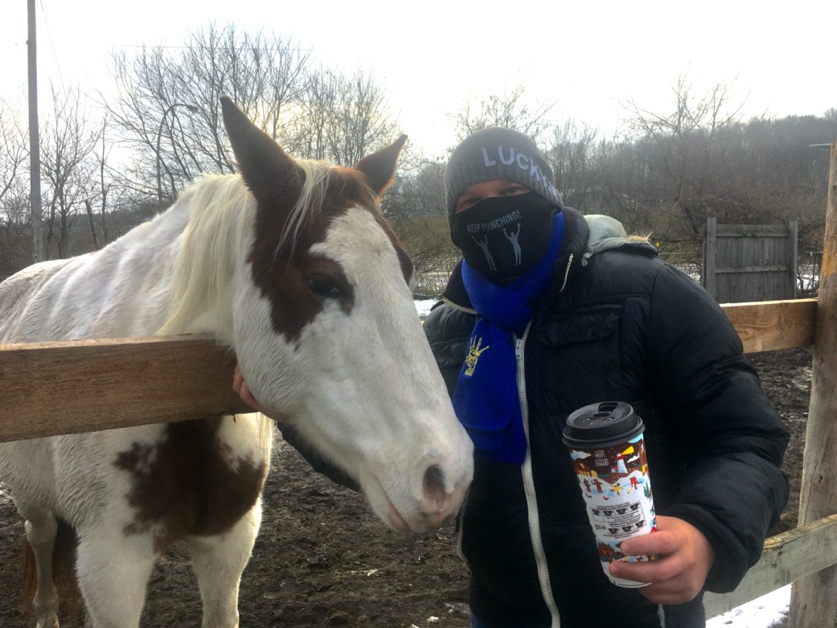 With 12 resident horses, this not-for-profit organization aims to provide a safe, comfortable and loving environment for retired caleche horses and others who were abandoned, mistreated or mismanaged, explains Lise Sandstrom, project coordinator for the AHT Experience program.

Their experience program, introduced in 2017, was initially designed for various forms of group sessions, says Sandstrom. However, the pandemic forced the volunteer-led organization to shift its focus, trying to find a way to still offer select groups access to its stable.

“So we thought, ‘OK, what are we going to do? We’re still here, we can still provide services to somebody,’ and so we decided to offer it to front-line health-care workers,” says Sandstrom. “It helps them in many different ways. I had someone who came in, and they were on (leave for) burnout and they said it really helped them get back on their feet.”

The nature of horses lends itself to therapy, says Sandstrom, who is a certified animal-assisted therapist. Unlike dogs, a more common therapy animal, she notes that horses are prey animals, making them observant to sounds, smells, body language and even feelings.

“The horses really reflect what people are feeling because they pick up on all the emotions,” says Sandstrom. “They’re so observant and they also smell it if somebody is anxious.” 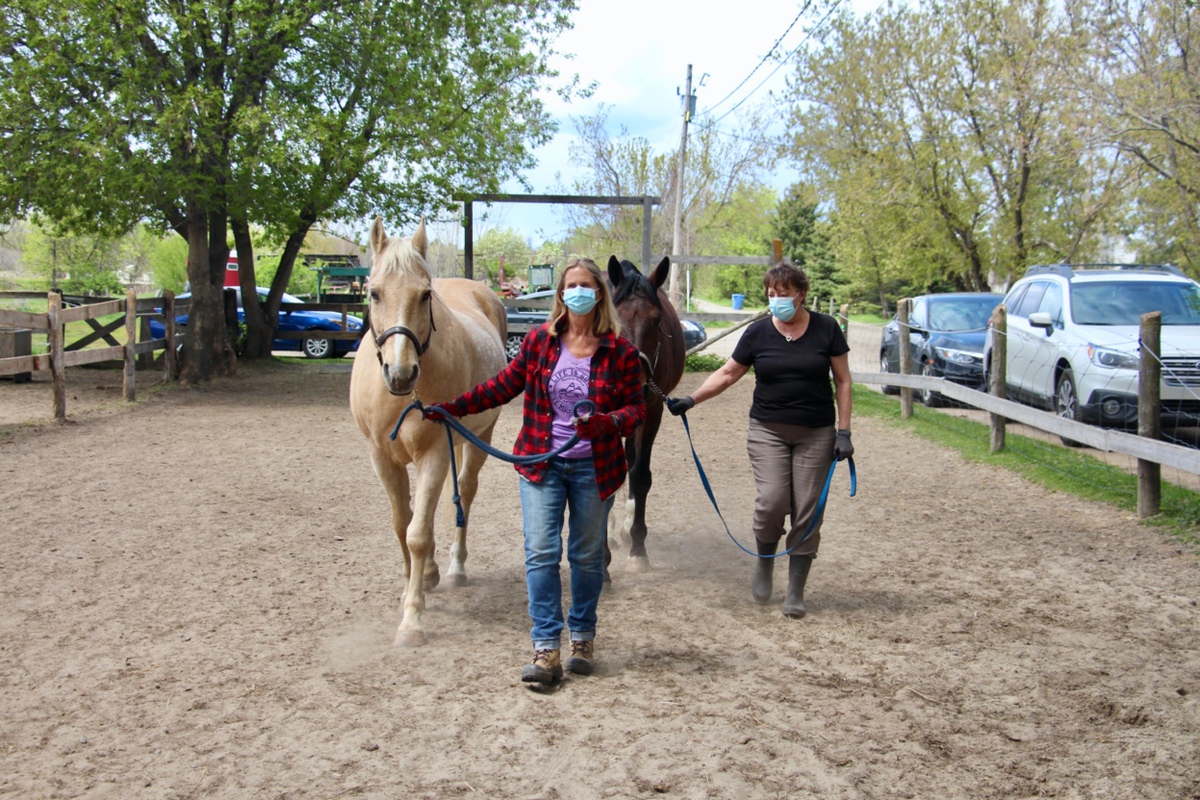 Lori Rubin and Vicki Wells are two of the volunteers who help facilitate the Experience program sessions.

Part of this has to do with the fact that horses are farm animals and have not been domesticated for as long, says Eileen Bona, registered psychologist and founder of Dreamcatcher, an animal- and nature-assisted therapy and psychology practice in Alberta.

“Because horses are prey animals and flight animals, they’re on guard 24 hours a day, so they are built to notice everything. They’re hypervigilant and they can notice even if your pupils dilate. If you’re feeling like ‘Uh-oh, I don’t feel safe,’ neither do they, because your body will change in a way that they notice,” says Bona. “They’re like an instant biofeedback machine.”

Bona says that the way horses are biologically made to pick up on these extremely subtle cues makes them excellent therapy animals, particularly for those who are dealing with forms of trauma, anxiety or stress.

“A lot of times, people don’t even know they’re disconnected,” says Bona. “It makes you pay attention, you can’t dissociate when you’re next to a horse. They force you to be present, you’re in the moment and that’s when healing can happen if you have a skilled therapist there to help.”

Bona has also opened up her practice for those working on the front lines. Although not everyone who comes to her 40-acre ranch needs counselling, she notes that the pandemic has made people appreciate animal- and nature-assisted therapy as ways to cope with stressful times.

“I’m noticing that my clientele is growing by the minute with people that are not even on the front line, they’re just people that can’t take it anymore,” says Bona, who says that another major factor for animal-assisted therapy is the focus on nature. “As humans, we genetically feel more comfortable and calm in a natural setting. It calms our brain down, we’re in tune with nature… it’s chemical, it’s biological.” 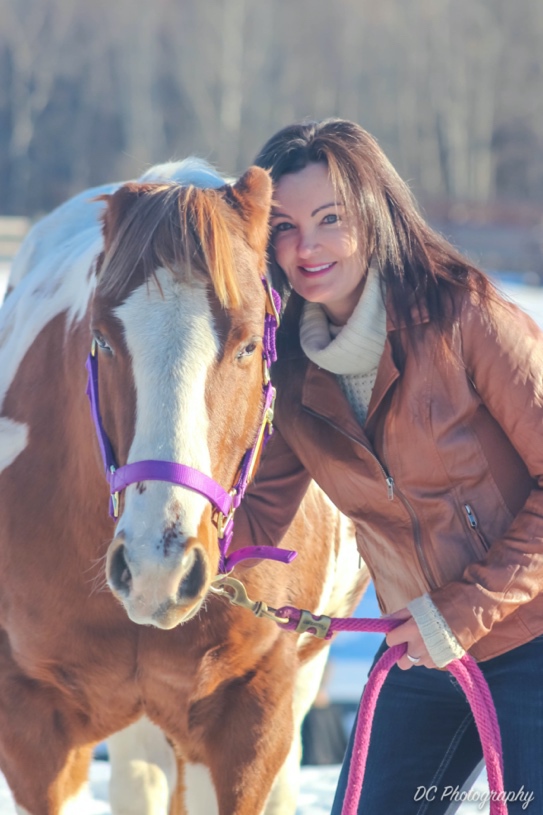 Eileen Bona says animal-assisted therapy is a great option for those who prefer non-verbal forms of therapy. Photo courtesy of Danielle Clark

Sandstrom notes that many participants report feeling immediately calmer after arriving at the stable.

“Some people describe it as being magical,” says Sandstrom. “Then they look forward to coming because this is their time.”

During a participant’s hour-long session, Sandstrom notes that the activities and chores, which are supervised by at least two trained volunteers, are customized to the participant’s preferences.

“I have some who like to do a lot of chores and a little bit of horse time, that makes them feel better and I have others who only want to do horse time,” explains Sandstrom. “I have others who come in and they’re pretty wound up still after several visits so I can include a relaxation period… I really try to make it custom for that person.”

While the AHT program does not offer psychotherapy, Sandstrom notes that “things do come out,” with participants sometimes opening up about their feelings.

Sandstrom notes that each session, which costs the stable an estimated $80, is made possible through donations and sponsorship. She encourages people who are eligible for the program to give it a try to break the isolating environment that has become all too common for front-line workers.

“I encourage people to come, all that can happen is that they can feel better, and they’ll learn a lot of things too and they’ll feel like they have something to look forward to in their hectic lives no matter what’s going on,” says Sandstrom. “We’re looking after them instead of them looking after everyone else.”

What AI-enhanced healthcare could look like in 5 years
Caring for children and youth with special health care needs during the CO...
Telehealth-delivered diet and exercise program eased knee pain and trigger...
A Silver medal and a roller-coaster final race have this paracanoeist look...
Walk for Angels 2022
Shoe insert helps clinicians evaluate how patients walk