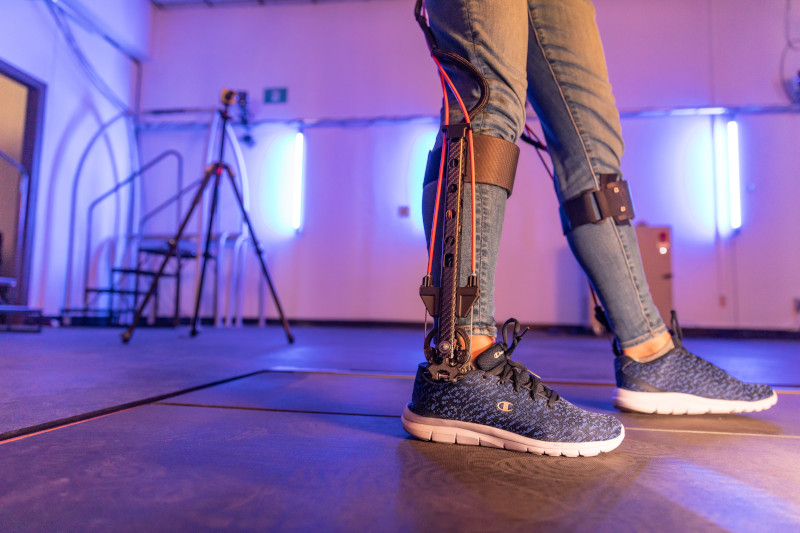 This funding, Lerner’s largest grant as principal investigator to date, will enable him to launch a major, five-year clinical trial to test a treatment strategy for children with cerebral palsy (CP) using his patented and patent-pending inventions comprising a lightweight, wearable robotic device that provides neuromuscular training while making walking easier.

“This is far and away the most significant grant we’ve received to date in terms of duration, budget and scope,” Lerner said. “The project builds directly on the work we’ve been doing at NAU for the past five years—developing an adaptive ankle exoskeleton device that offers a lightweight, portable and effective way to improve mobility in children with CP.

We completed technological evaluations and the initial clinical feasibility and pilot studies necessary to collect the preliminary data for this randomized controlled trial (RCT), which is the gold standard for clinical trials looking to establish efficacy of a new intervention relative to standard of care.”

Many members of Lerner’s team, who work with him in the Biomechatronics Lab on NAU’s Flagstaff campus, were instrumental in completing this work, including post-doctoral scholars Ying Fang and Paul Stegall; graduate students Greg Orekhov, Chance Cuddeback, Leah Liebelt, Karl Harshe and Safoura Bishe; undergraduate students Sam Maxwell and Jeff Yows; and MD/PhD student Ben Conner from the University of Arizona.

Lerner’s team will work with Mike Schwartz and his team at Gillette Children’s Specialty Healthcare in St. Paul, Minnesota, to conduct the 12-week gait training intervention using the exoskeleton technology developed at NAU and built by Lerner’s spinoff company Biomotum. Other aspects of the project will take place in Lerner’s lab and at the Ability & Innovation Lab at the University of Washington in collaboration with Kat Steele. 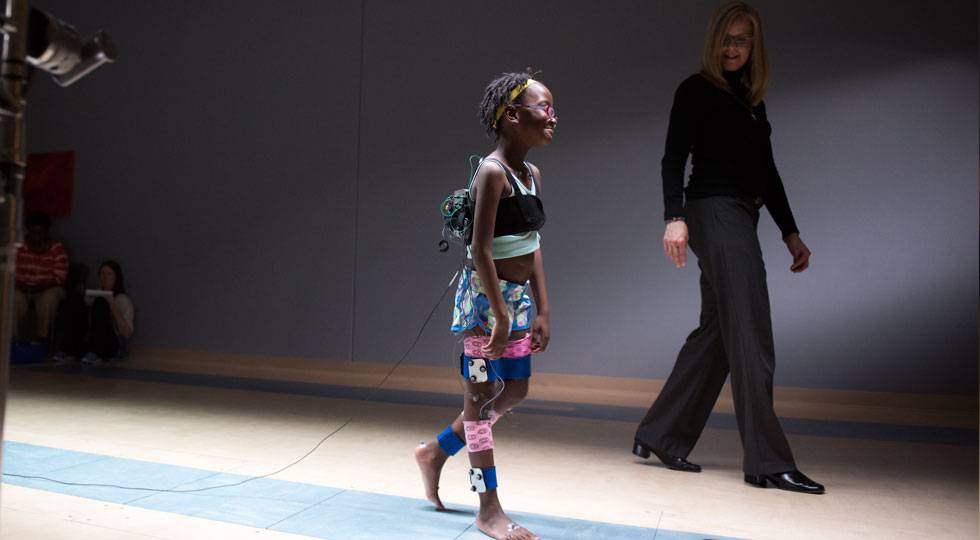 A child’s ability to walk effectively is essential to physical health and general well-being. Nearly four in 1,000 children are afflicted with CP, a neurological disorder that affects muscle control and coordination and often makes walking extremely difficult. Although most treatment strategies have proven insufficient, one of the most promising potential new treatment options is the use of battery-powered wearable robots, or exoskeletons, that provide home-based gait training and mobility assistance. These devices have the potential to revolutionize rehabilitation of patients with neuromuscular deficiencies, significantly decreasing their lifelong suffering and the resulting economic burdens placed on their families.

“There is broad clinical consensus that dysfunction of the plantar flexors, or calf muscles, is a primary contributor to slow, inefficient and crouched walking patterns in individuals with CP,” Lerner said. “Our study will focus on two hypotheses: that targeted ankle resistance training will produce larger improvements in lower-extremity motor control, gait mechanics and clinical measures of mobility compared to standard physical therapy and standard gait training, and that adaptive ankle assistance will result in significantly greater capacity and performance compared to walking with ankle foot orthoses and walking wearing just shoes.”

The study will explore participant characteristics, such as age, gender, GMFCS level, walking speed and spasticity rating, which are associated with the greatest improvement in outcomes following each intervention. It will provide guidance for future clinical and at-home implementation, establishing fundamental knowledge on the ability for adaptive ankle interventions to treat walking impairment relative to standard of care in CP.

Lerner’s pioneering research to date, funded through a succession of grants totaling more than $4.1 million from the NIH, the National Science Foundation, the Arizona Department of Health Services and private donations through the NAU Foundation, has demonstrated an improvement in walking function similar to or greater than outcomes from invasive surgery. Lerner’s research represents a successful investment from Arizona’s Technology and Research Innovation Fund (TRIF). Because of the funding he received through TRIF, Lerner was better equipped to apply for and win these major grants.