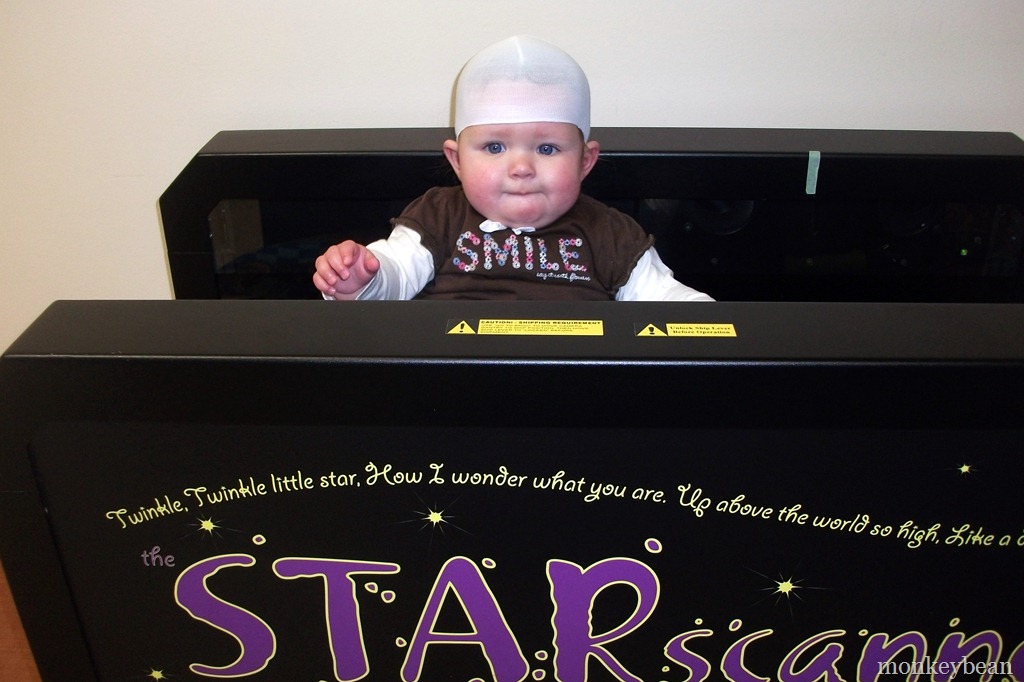 This morning, Kennedy had her 12-week scan done at STAR. I was so excited to take her, since I was pretty sure this would be the end of our time with the STARband. Kennedy has been wearing her helmet for three months – quite a long time if you ask me! I’ve been eager to be completely finished with it and to know that her flat-head problems are fixed! Monkeybean

Parents are not getting the information they need to prevent flat spots on their infant’s head.

That is what Assistant Professor Aliyah Mawji RN PhD, found when she completed Canada’s first study on the number of infants with positional plagiocephaly — flat spots on either side of the back of the skull.

Babies develop these flat spots by spending too much time in the same position, which puts pressure on one side of their head. For many infants, the flat spot is minor and may mend on its own or be hidden by hair. But others experience more severe forms of plagiocephaly, leading to misshapen heads and related facial distortions.

Mawji was shocked to discover that almost half of the infants in her study showed some type of positional plagiocephaly.

“That’s a red flag that parents aren’t getting the message they could be preventing this,” she says.

Flat spots have become more common in North America since the 1990s — an unintended consequence of the Back to Sleep campaign, which urges parents to place babies on their backs to prevent Sudden Infant Death Syndrome (SIDS).

“Anecdotally, we’ve known that we’ve been seeing higher incidences of plagiocephaly since the success of that campaign,” explains Mawji. “It turned out we didn’t have a clear indication of just how big a problem this was.”

She found that 205 of the 440 infants had some degree of head flatness.

“The majority of the cases were mild,” says Mawji. “That’s still a very high number. Close to 50 per cent.”

As babies age, their skulls harden and flat spots become more difficult to treat. If flat spots are not detected early enough, some infants may need to wear a cranial orthotic device — a helmet designed to reshape the infant’s skull.

“It’s great that there’s a treatment, but it’s costly,” says Mawji. “It’s not covered by Alberta Health Care. And it can be uncomfortable for the infant. The helmet has to be worn 23 hours a day.

“Why not just prevent it?”

“While it’s very important to continue putting your infant to sleep on his or her back, there are some really simple things you can do,” explains Mawji.

“For example, alternate the side of your infant’s head that comes into contact with the mattress. An easy way to do this is to change the direction that you put the infant to sleep in the crib. Infants tend to turn their head towards the door, so if you change the direction they are laying each night, they won’t put pressure on the same side.”

Mawji also suggests limiting the amount of time an infant spends in car seats, bouncy chairs or other devices that put pressure on the skull.

“Another thing you can do is when you’re feeding, don’t always hold your infant on the same side,” says Mawji.

“And lots of tummy time. You can start putting a newborn on his or her tummy as early as one week. This helps infants to build neck, shoulder and arm strength, ultimately helping them to reach developmental milestones.”

While Mawji is surprised by the number of babies she saw with plagiocephaly, she is hopeful her study will help parents become aware of these simple methods of prevention.

“Some of the parents I spoke with knew their infant had a flat head,” says Mawji. “But they didn’t know what to do to prevent it.”

Mawji began her career working as pediatric nurse at the Peter Lougheed Centre. There, she quickly became frustrated by the number of preventable illnesses she saw.

“You’d have children coming in with asthma whose parents smoked in the home,” she says. “Or you’d see cases where you’d suspect abuse in the home. It’s those types of things that get you thinking, Well, maybe I can make an impact on a different level.”

She went on to spend some time working in neonatal intensive care nursing, but soon realized there was still something missing.

“I thought, No, this is not where I am meant to be. I’m interested in prevention. So I decided to pursue a master’s degree in public health.”

After receiving her masters from the University of Alberta, Mawji was offered the opportunity to work in global health. Her new position allowed her to travel to resource-poor countries and work on various community health programs.

It was during a trip to northern Pakistan that Mawji noticed something that would mark a turning point in her career.

“I saw a whole bunch of people with flat heads. So I started asking, Have you heard of the Back to Sleep campaign? and they’d look at me like I was crazy,” Mawji laughs. “So then I had to ask the blunt question: Well, why does everyone have a flat head?”

“And the answer I got was, Because it’s beautiful. We value flat heads.”

Mawji learned this community would rub the back of a baby’s head with a stone to shape the skull. When she returned to Canada to complete her PhD after two years abroad, she decided to further explore this unusual custom.

“Originally, I wanted to study head flattening as a cultural practice,” she says. “I couldn’t return to Pakistan because it was politically unstable. So my supervisor, Dr. Ardene Robinson Vollman, suggested I look at Canada.”

Mawji quickly discovered that little research had been done on positional plagiocephaly — despite anecdotal evidence that it was on the rise.

“Talking to nurses and doctors everyone said, Oh, yes, we’re seeing more of this in our clinic,” remembers Mawji. “But we didn’t have a clear sense of how big a problem this was at the population level.”

Now that her study has exposed the extent of the problem, Mawji says there is still much work to be done including examining long-term effects.

So far, research indicates that flat spots do not affect a baby’s motor or cognitive skills. While some studies show that infants with flat spots are slower to reach developmental milestones, these differences usually disappear by eighteen months.

While this is good news for parents already dealing with infants with flat spots, Mawji stresses that more research is needed to fully understand the consequences of this condition.

Mawji also worries that some children may be at risk for bullying because of their unusual features — particularly those children who suffer from more extreme forms of plagiocephaly.

In the meantime, Mawji says that the health system needs to be doing a much better job of informing parents and caregivers on how to prevent flat spots.

“At the hospital new parents are focused on establishing feeding and making sure mom and baby are healthy, so this isn’t necessarily high on their list of priorities,” explains Mawji. “Prevention methods — which are very simple to do — are often not taught until parents come to the two-month immunization clinic, and by then the infants have already developed flat spots on their heads.

“We need to find an avenue to disseminate the information much earlier.”

Mawji’s groundbreaking study, published in Pediatrics, has already been the focus of national and international attention.

“I didn’t think I would receive that much attention, to be honest,” Mawji laughs. “I’ve given about ten interviews so far, and I’ve received emails from people around the world.”

Mawji’s story has been covered by the CBC, the Globe and Mail, NBC News, the Huffington Post, and other major media outlets.

For Mawji, this coverage means that more parents are getting the information they need. “But when we’re talking about health promotion and providing parents with some sense of control, there are very easy strategies parents can implement at home to help support the health of their infant,” says Mawji.

Mawji is also looking forward to incorporating her research into the classroom. After teaching at the University of Calgary for five years, she was pleased to join Mount Royal University School of Nursing in Jan. 2012.

“I really welcome the opportunity to pull together my teaching and my scholarship,” she says.

“I think this is a great way for us to role model to our students how we can find solutions to some of the issues we’re seeing in nursing. It’s how we bridge theory into practice.”