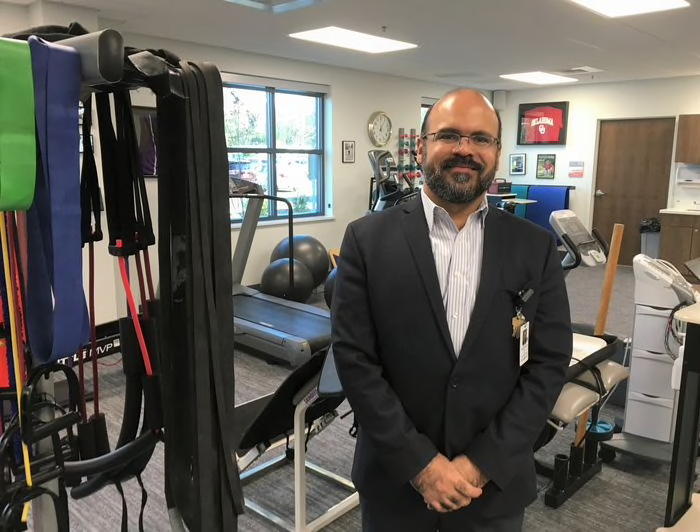 Dr. Julio A. Martinez-Silvestrini is medical director of Baystate Physical Medicine and Rehabilitation that has a number of locations in the western Massachusetts area. The physiatrist, shown here at Baystate Health and Wellness Center in Longmeadow, is board certified in sports medicine as well as physical medicine and rehabilitation and sees patients in Longmeadow and Springfield for injuries of the muscles and joints as well as conditions like arthritis that do not require surgery. Anne-Gerard Flynn photo

By Anne-Gerard Flynn | Special to The Republican, MassLive Dec 15, 2019

A back injury as a 17-year-old weight lifter on Puerto Rico’s national team started Baystate Health’s Dr. Julio A. Martinez on a career path that would lead to his specialty – physiatry – that helps restore impaired function in patients who do not need surgery.

Also known as physical and rehabilitation doctors, physiatrists treat a variety of conditions affecting the brain, spinal cord, nerves as well as joints and muscles in patients of all ages and may work with a team of other health care professionals, like physical therapists, in overseeing a patient’s treatment.

Martinez is medical director of Baystate Physical Medicine and Rehabilitation that has a number of offices in the area and was the first physiatrist in the Pioneer Valley to become board certified in sports medicine in addition to physical medicine and rehabilitation.

The field of rehabilitation [1] became a separate medical specialty after World War II in the United States, Martinez noted, and the broad medical training of physiatrists allows them to diagnose and manage a variety of conditions as well as perform procedures exclusive of surgery to determine what is interfering with a patient’s ability to move and causing pain as well as treat the problem.

“We use physical agents like ice, heat, massage, electronic stimulation to help restore the patient’s function,” said Martinez who sees patients for injuries of the muscles and joints as well as conditions like arthritis at the recently opened Baystate Health and Wellness Center on Dwight Road in Longmeadow and in Springfield.

Martinez said many of the injuries he sees are the result of overuse of muscle, joints, ligaments and tendons that attach muscle to bones and that can result in inflammatory conditions like tendinitis and bursitis.

He also treats acute injuries like sports-related concussions. “Ninety to 95 percent of all sports injuries are non-surgical and we are equipped to treat all of them,” Martinez said. He added someone needing surgery for an injury like a fracture would be referred to an orthopedic surgeon.

“The philosophy of doing rehabilitation involves identifying three elements,” Martinez said. “The first is the anatomic dysfunction – what is the type of injury that is causing the athlete pain. The second is which symptoms does the patient have – pain, redness, decreased strength – and then what is the functional limitation, such as the gymnast cannot tumble because they are having shoulder pain.”

He added once anatomic dysfunction is identified, sometimes through physical examination or tests, like an MRI, and symptoms eased through protective applications such as the use of crutches or bracing, sports performance can be addressed.

“An athlete may not be ready to lift weights or run, but they can do posture exercise to make sure their posture is correct,” Martinez said.

“They might work on their technique or flexibility. There are a lot of things we can do in the gym as part of the rehabilitation process.” He said it is important for athletes not in the initial phase of recovery to do their rehabilitation exercises twice a day when possible to speed up recovery.

Martinez has served as doctor to a number of area high school, college and professional sports teams, like the Springfield Falcons, which played in the American Hockey League until 2016, and the Springfield Armor baseball team when it was based here, and he continues to visit schools and other venues to talk to athletes both about injuries as well as how to avoid them.

“I performed with my back injury as a young athlete in an international competition and that was not only painful but it was frustrating emotionally to not be able to perform to the level that I could,” said Martinez of what motivated him as a teen who went through a long recovery process to eventually want to work as a physician in the area of physical medicine and rehabilitation and with a population that included the sports injured.

He added, “The way I see rehabilitation is that for me any patient is an athlete. Your goal may be to run a marathon, but your goal may be to walk without using a cane or a walker,” Martinez said. “So, I approach every patient as I would an athlete but with modified goals.”

Martinez did his fellowship training in sports medicine at the Mayo Clinic in Rochester NY, which was a pioneer in the development of the field of physiatry after WW II, and has been in practice at Baystate for 17 years.

He oversees a clinic for patients with musculoskeletal conditions like arthritis as well as the sports medicine program. He said many patients are referred to his department through their primary care provider, but some with athletic injuries come through the department’s educational outreach to schools, gyms and vocational programs.

“We do physical examinations for sports participation, evaluation for injury and prevention of injuries and we are the only evidence-based concussion program in Western Massachusetts,” said Martinez who works with neuropsychologist Zachary Marowitz in evaluating athletes for concussions and in helping them return to their sport as soon as possible.

He said his concussion patients can be from a variety of sports from cheerleading to volleyball, but for girls it is most commonly soccer, and football for boys.

“We tried to avoid over stressing as one way to look at a concussion is as an energy crisis in the brain. You don’t have any tears or a bleed. It is a chemical reaction. Chemicals are at the wrong level. You want to give the right environment for your brain to re-regulate those chemicals.”

He added, “The most common barrier we see for someone to recover from a concussion is that they do not say anything and they continue to participate in their sport.”

“They are using all that energy that should be used to heal their brain to play their sport,” Martinez said.

He said the approach his practice takes is to try to enable the student patient to return to classes as soon as possible while getting sufficient rest and limiting the use of any over-the-counter pain medication.

Martinez called prevention “the best medicine” when it comes to sports injuries.

“We can prevent an injury easier than we can treat it,” said Martinez, adding he and his staff will do clinics at schools in different sports to raise awareness around prevention.

“One of the main things I focus on is the importance of being fit in terms of participating in sports. A lot of people play sports to be fit when it should be the other way around. You can exercise to be fit, but you should not participate in sports to be fit. Sports implies there is competition and with competition you may push yourself to a limit that your body might not be prepared for and you could end up with an injury.”

“We see a range of prototypes prone to injury. For example, a football player may be very strong but not too flexible. That athlete may have injuries related to muscle strength, like hamstring strain,” said Martinez of a condition that can happen when muscles at the back of the upper leg get stretched too far.

“A gymnast may be very flexible but not as strong and may be at risk for developing joint instability problems. Also, a football player or gymnast could get tired very fast without good endurance and so, at the end of the competition, the muscles get weaker and the athlete loses their technique and then they may be prone to have injury as well.”

Older active adults he sees often have knee arthritis that has flared or a tear of the cartilage called the meniscus that is between the outside and inside of the bones that form the knee joint.

“This is a little cushion between your thigh and shin bone, between your femur and the tibia, and a lot of lowering and rotation – like in shoveling snow where you bend and twist – can injure your meniscus,” Martinez said.

“When this is happening at the knee instead of at your hip you end up having a meniscus injury. This can also happen when you are doing deep squats.”

Martinez said most of the patients he sees visit Baystate’s rehabilitation services two or three times a week to work with therapists and the other days do their exercises at home.

“The most common failure for rehabilitation is a patient does not come or they come the days they are supposed to but they do not do the work at home, but also common is that the patient does come to therapy without missing an appointment and does their work at home and as soon as they start feeling better, they stop doing their exercises,” Martinez said.

“You should be pain and symptom free before stopping rehabilitation and get cleared by your doctor. If you still have mild pain, you will regress.”

Gym equipment available to patients in Baystate Rehabilitation Care, Martinez said, include resistance machines with “levers and pulleys that we change in the direction the athlete is pulling to target specific muscles.”

“For example, for a patient with back pain we may do an exercise where there is pulling not to exercise the shoulders but to provide stability to their trunk.”

He said there are also weighted resistance balls that can be used by athletes starting to do plyometric exercises [2] to build stability or power for throwing as their rehabilitation progresses.

“We may also have athletes do aerobic exercises, like marching in place or using a recumbent bike, to build endurance,” Martinez said.

“We want to be sure their endurance improves. For strengthening, we will be doing resistance training that may be body weight exercises or we may use some pulleys or weights or elastic bands. For flexibility, we will give them specific exercises to stretch and sometimes we may need to use some straps or devices to help the athlete have adequate stretching. We may teach them both static exercises which is stretching a limb or dynamic exercises where you do an exercise to promote flexibility.”

“We do not have a cookie-cutter approach in which you are doing this exercise and that is it,” Martinez said. “The exercise rehabilitation process is customized for each athlete.”

Martinez said that many of the athletes he sees are on school teams and fall between the ages of 12 and 21.

“That said,” he added, “we see athletes younger than 12 and older than 21, with the majority of the older population between 40 and 60, but we also have athletes into their 80′s – often coming in with a golfing injury – and leaving as fit or fitter than some of the younger ones.”

Martinez said he feels in treating the sports injured “age is not a number anymore.”

“I think that at this moment the reality is that the athlete is an ageless creature and we need to look at them and what is their sport, what they are missing and what we can do to help them out.”

Knee replacement timing is all wrong for most
Pectus carinatum - Frequently asked questions
Alberta Blue Cross: Orthotics
A Silver medal and a roller-coaster final race have this paracanoeist look...
Taking the brain out for a walk
Pre-school Resource Fair in Calgary, January 25, 2020